2017 Nissan Titan By the Numbers

Full-size pickup trucks are big business in North America. Make that a full-size business: During the first half of 2016, more than one out of every seven passenger vehicles sold in the U.S. was a pickup truck, and the Ford F-Series, Chevrolet Silverado and Ram pickups were the nation's top-three selling vehicles. In Canada the proportion of trucks sold is even larger, with nearly one out of four passenger vehicles sold being a pickup truck, and the Ford F-Series and Ram pickup sit atop the overall sales podium. All told, Americans and Canadians took home nearly 1.5 million pickups between them in the first half of 2016.

The folks at Nissan see this as a huge opportunity. As Andrew Harkness, chief marketing manager for Nissan Trucks explains, Nissan is North America's second-largest car brand, but the company's previous Titan pickup has been a niche product aimed at the recreational market, leaving it sitting near very the bottom of the truck sales hierarchy. With its all-new 2017 Titan, Nissan intends to change that. 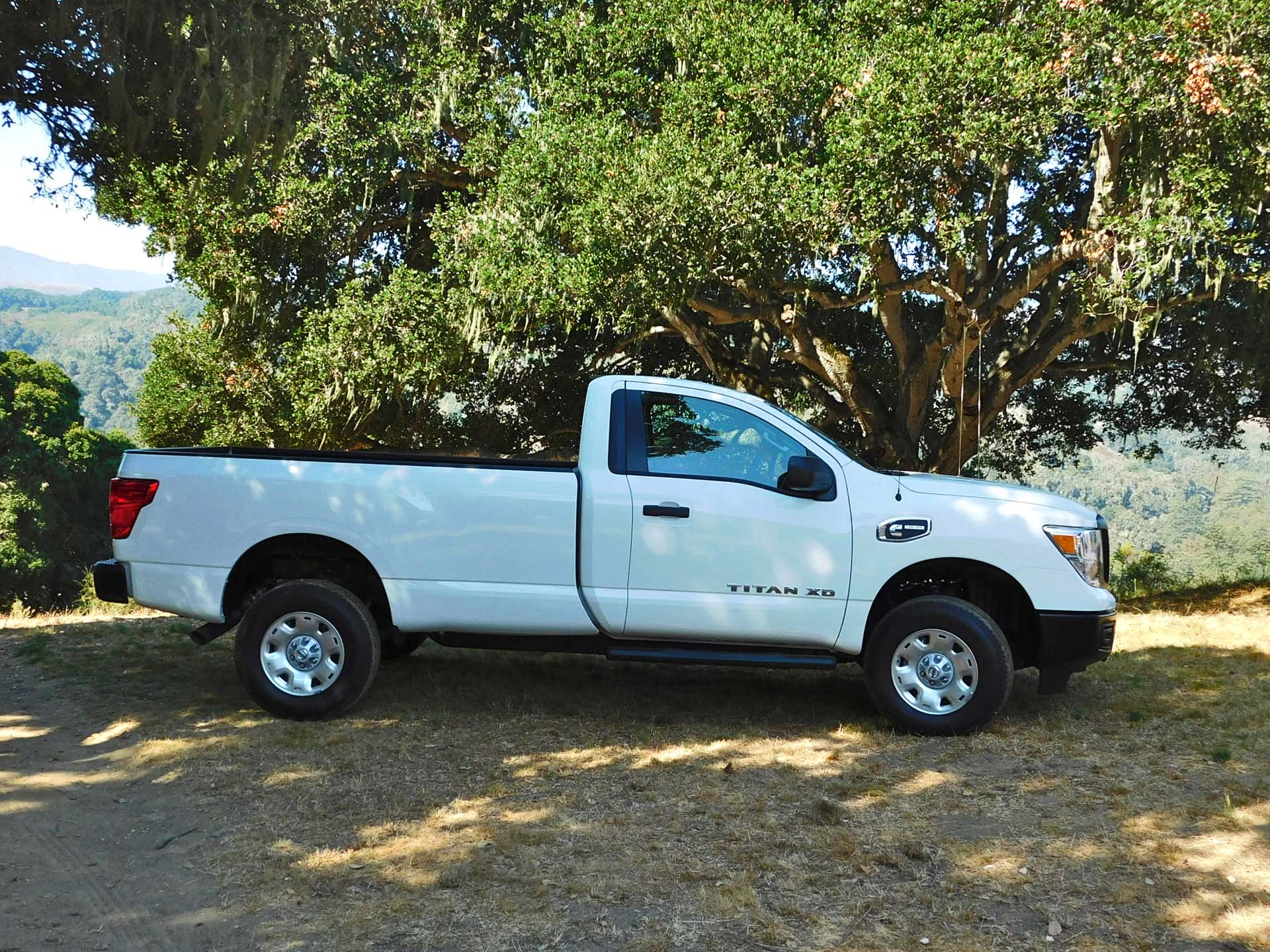 Where the previous Titan was available only as a king cab or crew cab in XD guise, the 2017 Titan will offer a choice of single-cab, king cab or crew cab, with two-wheel drive or four-wheel drive running gear, and a new base (half-ton) model in addition to the XD model. It's the first half-ton single-cab offering in the Titan's history, and combined with the base S trim it's a move aimed at capturing the blue-collar work truck market. "Our philosophy is that if you build a good work truck, the recreational market will follow," explained Nissan's Harkness during a drive event presentation in Carmel, California.

The truck is built on a fully boxed ladder frame with double-wishbone front suspension, a traditional solid axle hung on leaf springs in the back, and hefty stabilizer bars front and rear to provide flat cornering while still allowing a compliant ride. To reduce vibration and juddering in the cab, hydraulic rear cab mounts are used rather than solid urethane mounts, and the rear leaf springs have been tuned for a smoother and more linear response. The half-ton model has its own frame with a 300 mm shorter wheelbase.

The exterior design was penned at Nissan Design America in California, with a strong emphasis on aerodynamics. Features like active grille shutters, a front spoiler, roof and tailgate spoilers, underbody covers and rear tire wind deflectors all help reduce aerodynamic drag on the highway and contribute to a 10 percent overall improvement in aerodynamic performance. Style-wise, the new truck has an undeniably strong presence, with muscular fender bulges, slashed LED taillights, big fender ports, and signature LED daytime running lights. Nissan's familial V-motion grille is present and accounted for, but here it's slightly disguised to have a more squared-off and aggressive appearance than on other Nissan products. It's a look that says "pickup" first and "Nissan" second. 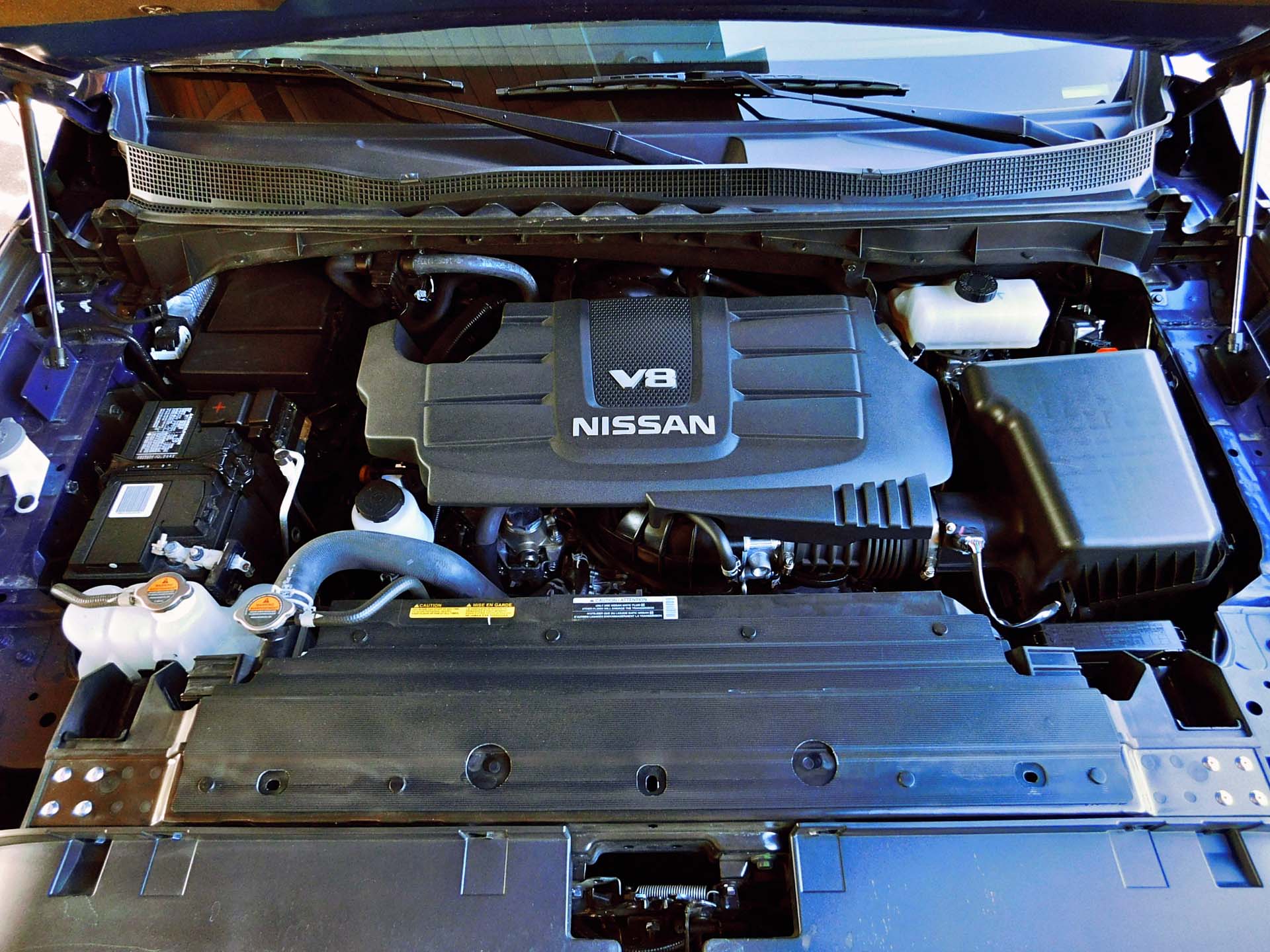 Powering the 2017 Titan is a new lineup of engines, including a base V6, a V8 diesel, or an all-new version of Nissan's 5.6L Endurance V8 gas engine. For the initial drive event in Carmel, only V8 gas-powered trucks were available for testing, and detailed information regarding the V6 and V8 diesel engines wasn't available (they'll be arriving on the market a couple months behind the V8 gas-powered truck). About the closest we got to a base work truck was a white single-cab Titan that Nissan displayed wearing Cummins diesel badging.

The new V8 gas engine features direct injection, variable valve event and lift (VVEL), new heads, new pistons, and improved heat management systems to allow both more power and better fuel economy than the previous V8. It develops 390 hp at 5,800 rpm and 394 lb-ft of torque at 4,000 rpm, up from 317 hp for the previous V8. At idle it's smooth and quiet, and under hard acceleration it offers a pleasing deep bellow. Based on converted U.S. ratings, while the previous Titan was rated 19.6 / 13.8 L/100 km (city/highway) a similarly equipped truck with the new V8 is rated 15.7 / 11.2 L/100 km. During our mixed test driving in a crew cab 4x4 truck we saw about 14.8 US mpg, which works out to 15.9 L/100 km (and this included a fair bit of idling time while taking photos). 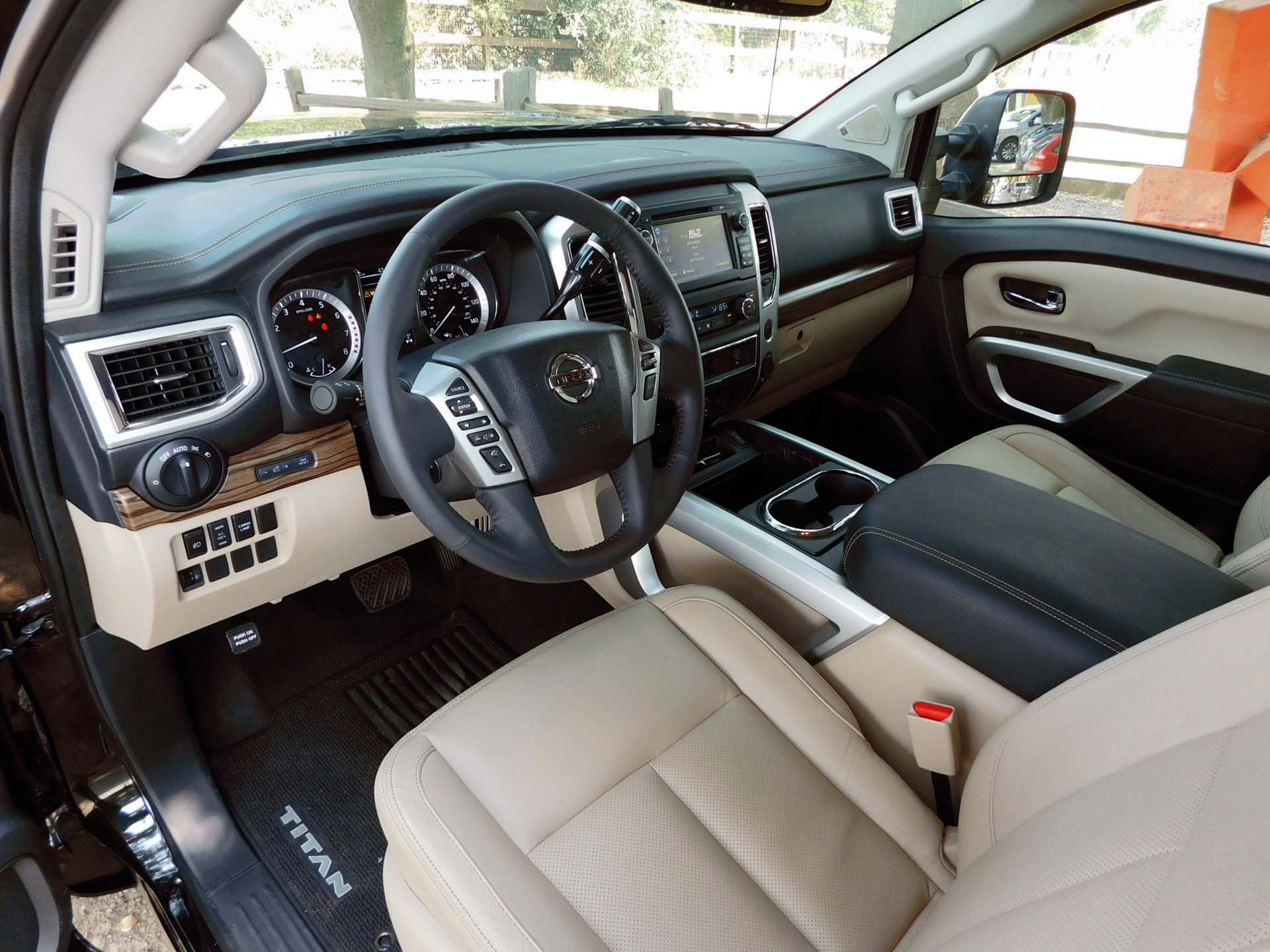 The engine is hooked up to a heavy-duty seven-speed automatic transmission that provides a wide range between its lowest ratio and highest ratios to allow both strong acceleration in low gears and good highway economy in high gear. It also features a transmission fluid warmer to help bring the transmission up to operating temperature more quickly, improving fuel economy during the first crucial kilometres after a cold start-up. During our test drive the transmission proved well-matched to the engine: it responded appropriately to driving demands in automatic mode and shifted crisply, and in manual mode it had quick responses to shift requests. Control is via a traditional column shifter, which opens up space for either a bench seat or a commodious console bin, although I wasn't 100 percent keen on the positioning of the manual shift control on the shifter grip; it works well enough, but felt a little ergonomically awkward.

If capability is king in the pickup segment, the new Titan certainly has the credentials to capture the throne. Even the half-ton model has a payload of 875 kg and a towing capacity of 4,414 kg, and all but the base models have integrated trailer braking control (the base model is prewired for installation of a trailer braking control). Maximum payload is offered by the V8 gas-powered XD model, at 1,320 kg, and maximum towing capacity is offered by the XD diesel at 5,460 kg. To make towing easy, the Titan offers features including trailer sway control, Tow/Haul mode with downhill speed control, rearview monitor with trailer guides, and a remote trailer light check system for easy one-person confirmation of trailer light operation.

Keeping things easy if you choose to venture off-road are features including hill descent control, hill start assist, Brake Limited-Slip Differential (BLSD) and electronic locking rear differential. During the recent drive event in Carmel, we drove a Pro-4X Titan on an off-road course that included a long, steep twisting downhill section to demonstrate the effectiveness of the hill descent control, a section of generically rough terrain, and then some manufactured obstacles including a hummock with steep angles of approach and departure, a sharply angled side slope, and "elephant track" offset hummocks that had one or two wheels off the ground at times. It wasn't quite the Rubicon Trail perhaps, but it was some pretty wicked terrain, and the Titan tackled it all with ease. 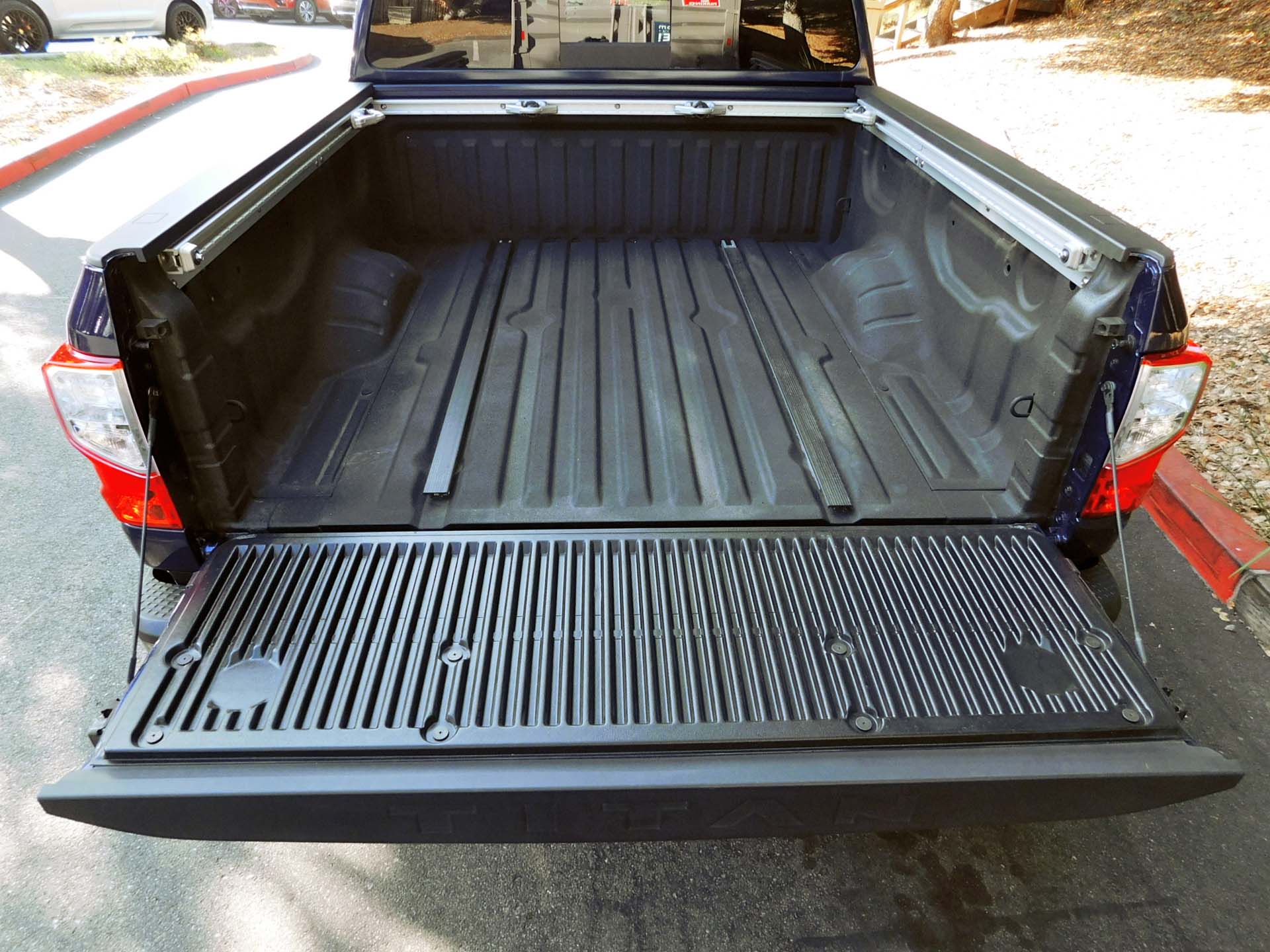 Inside, Nissan has used an acoustic windshield, acoustic laminated side glass, a triple-layer dash insulator (instead of the previous generation's single-layer insulator) and hydraulic rear cab mounts to achieve a 10 dB reduction in vibration noise and 3 dB reduction in unwanted engine noise compared to the previous Titan. Certainly during our test drive the truck proved impressively serene – there was some wind noise generated by the big exterior mirrors at highway speeds, but it was well muted by the acoustic side glass, and in all other respects the truck was just plain quiet. The hydraulic cab mounts and retuned leaf springs did an excellent job of eliminating the typical truck "jitteriness" over bumps, and the ride felt more "SUV" than "pickup". Not that the Titan is missing any essential "truckness" – it still feels solid like a truck should, but some of the ruder characteristics associated with pickup trucks have been toned down.

In practical matters, our SL 4x4 test truck was fitted with exceedingly comfortable leather-upholstered "Zero Gravity" front-row captain's chairs, with a commodious console bin between them and plenty of storage cubbies and cupholders throughout the cab. Overall, rear storage has been improved by 28 percent and front storage by 33 percent. Under the rear seat there's a convenient lockable second-row under-seat storage bin.

At the business end of the truck, the bed features an easy-to-use lift-assisted and damped tailgate, cargo and tailgate lamps, and 110-volt in-bed access, and is available with features including factory spray-on bedliner, flush-mounted LED bedrail lighting, a versatile Utili-track bed channel system to make it easy to secure cargo, and removable lockable storage boxes that can be accessed even with a camper top or tonneau cover in place. 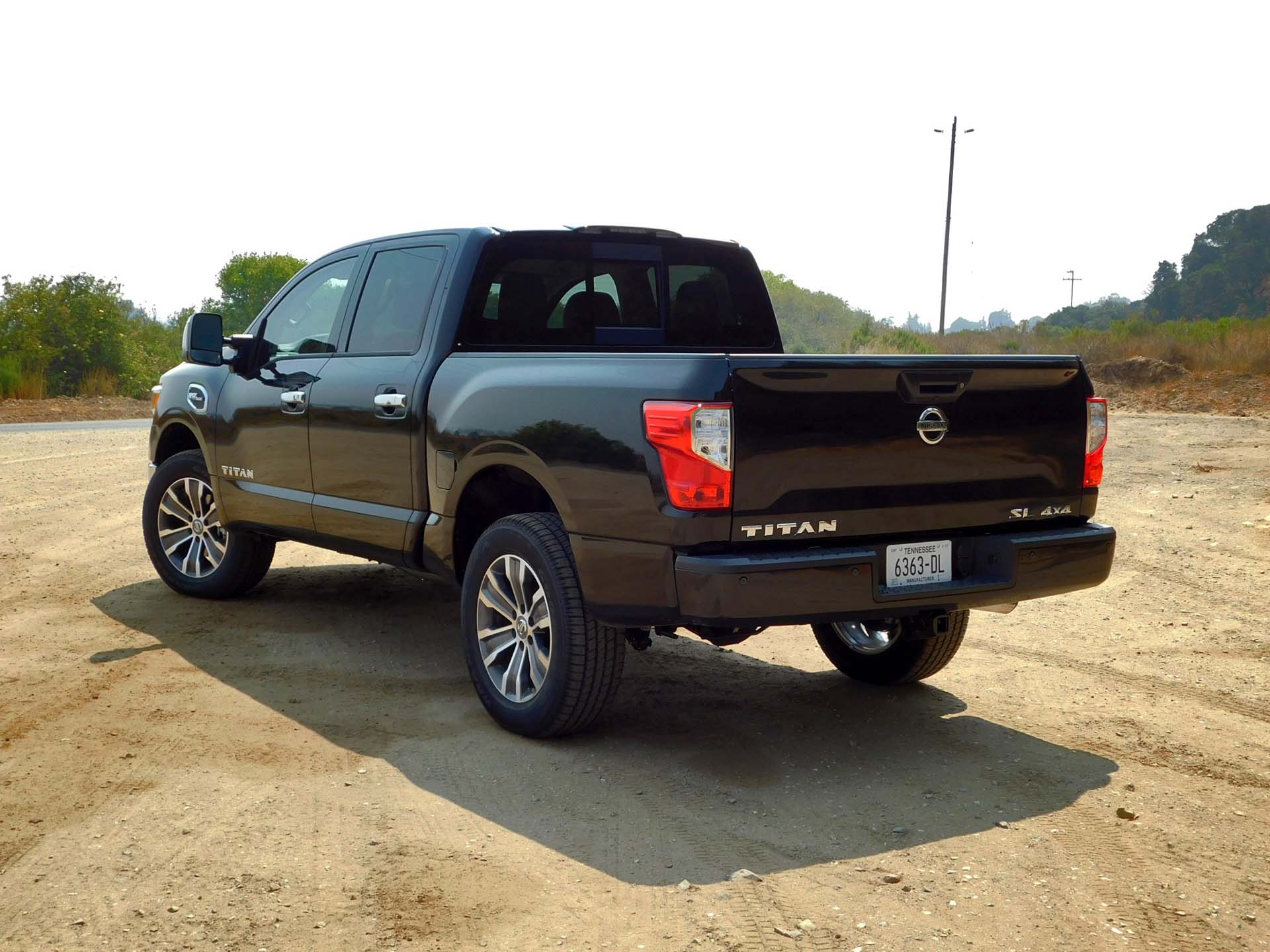 The 2017 Titan will be available in five trim levels when it goes on sale in mid-August: S, SV, Pro-4X, SL and Platinum Reserve. All are available in four-wheel drive.

Base S models get a manual split bench seat (40/20/40) up front featuring a flip-down centre seat with armrest. Infotainment is provided via a 5.0-inch colour display and a standard four-speaker AM/FM/CD/MP3 audio system with auxiliary and USB inputs. Bluetooth streaming audio, hands-free text messaging and NissanConnect with mobile apps are all standard. 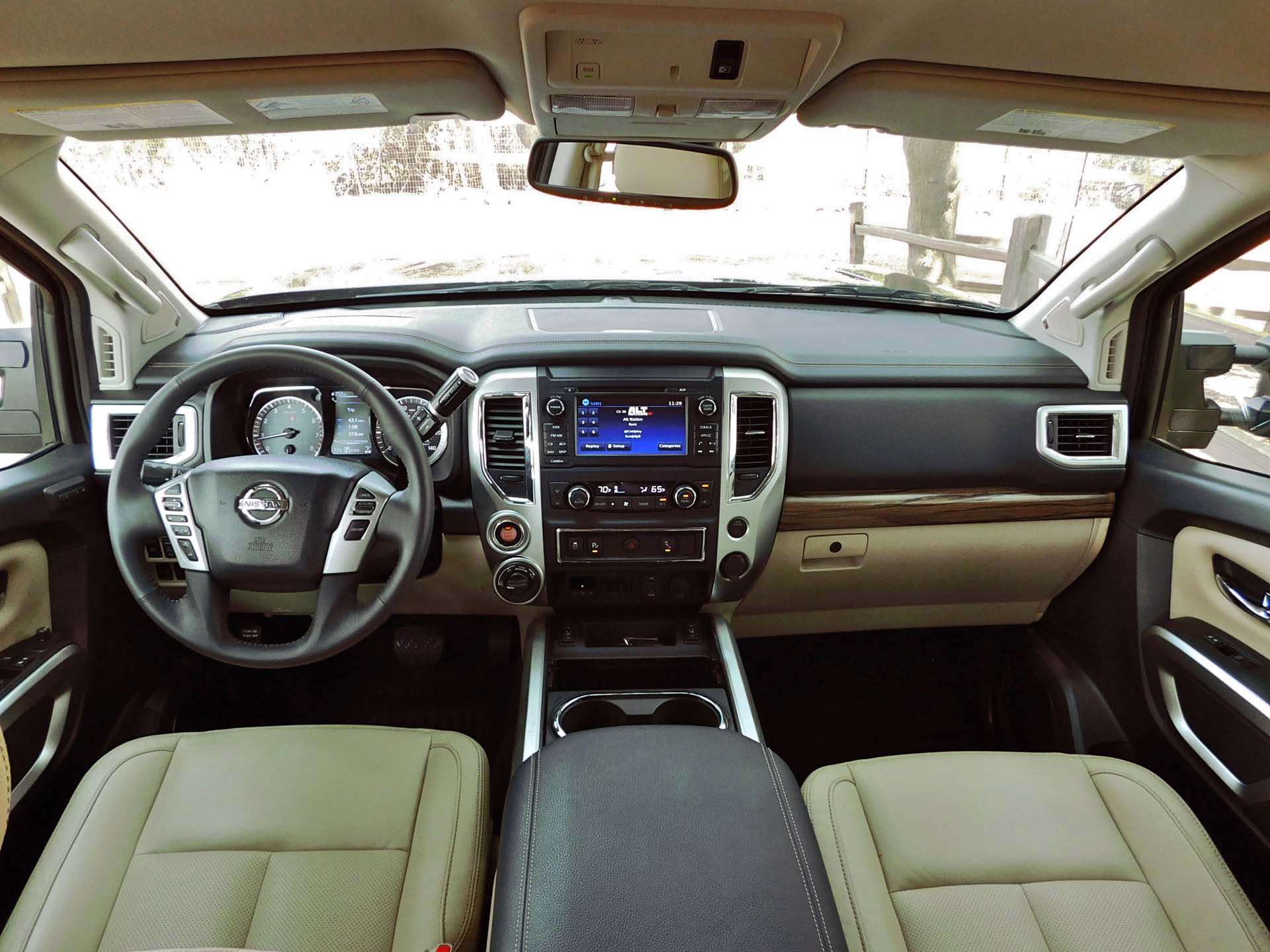 Regardless of trim, the new Titan is backed by an industry leading five-year, 160,000 km bumper-to-bumper limited warranty.