It was always going to hurt. And it did.

There wasn’t any point trying to slow down. So I didn’t.

I should have bailed out. Instead, I baled out.

“Oh dear,” I remember thinking, and then: “Goodness gracious me.” The hale bale stopped the bike, abruptly. I continued for a while until the ground stopped my face, also abruptly.

Somewhere in the tangle of straw, sky, motorcycle and Jacob, the footpeg pierced my boot and punctured my ankle. Somewhere else my hand folded back down on itself causing the tendons to tear one of their anchors out of the bone – this is called an avulsion fracture but it’s actually a very minor injury.

The visor on my AGV helmet disappeared the first time my head bounced off the grass, and all I picked up was a light bruise on my temple and forehead – the helmet deserves a very positive review.

When I stopped sliding I got up, and then I lay down again, because I was sad.

But I am lucky. Hell, I feel most sorry for the ambos loading me onto the stretcher. “Bet you lot wish I was skinnier,” I chuckled. They didn’t laugh. 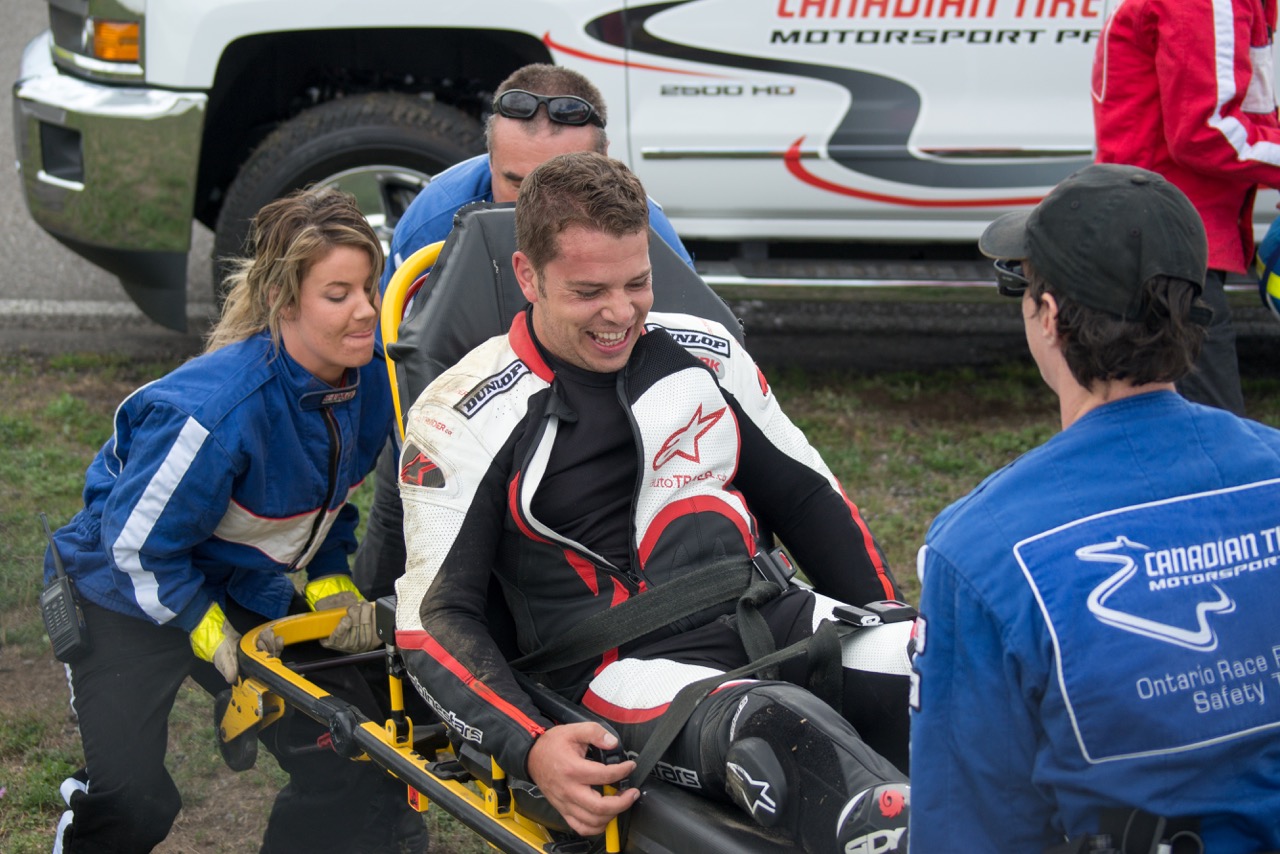 The footpeg that punctured my ankle missed my Achilles tendon, the swelling in my hand is mostly soft-tissue damage and will heal soon. Even the fracture is the sort that heals quickly and without any surgical intervention. In the general scheme of things, I am utterly unscathed.

The Kawasaki Ninja 300 spec series race bike – not so much.

Which is a pity, because I’d come to love that bike. With 38 hp and a diminutive 172 kg chassis, the little Ninjas are about as unintimidating as a racing bike can be. Kawasaki’s program gives you the entire bike, race-ready and set up for $7,500: easily the most affordable brand-new road racing bike on the market.

The grippy Dunlop SportMax tires are good for at least a full weekend of racing, potentially two or more. The costs to run the bike are kept small by the simple stock formula. Those tires, while we’re on the subject, give excellent grip right out to the edge and heat up quickly and evenly. Even on a damp practice session they dealt comfortably with the wide variations in grip levels and never came unstuck. Until the end – which I’ll get into shortly. 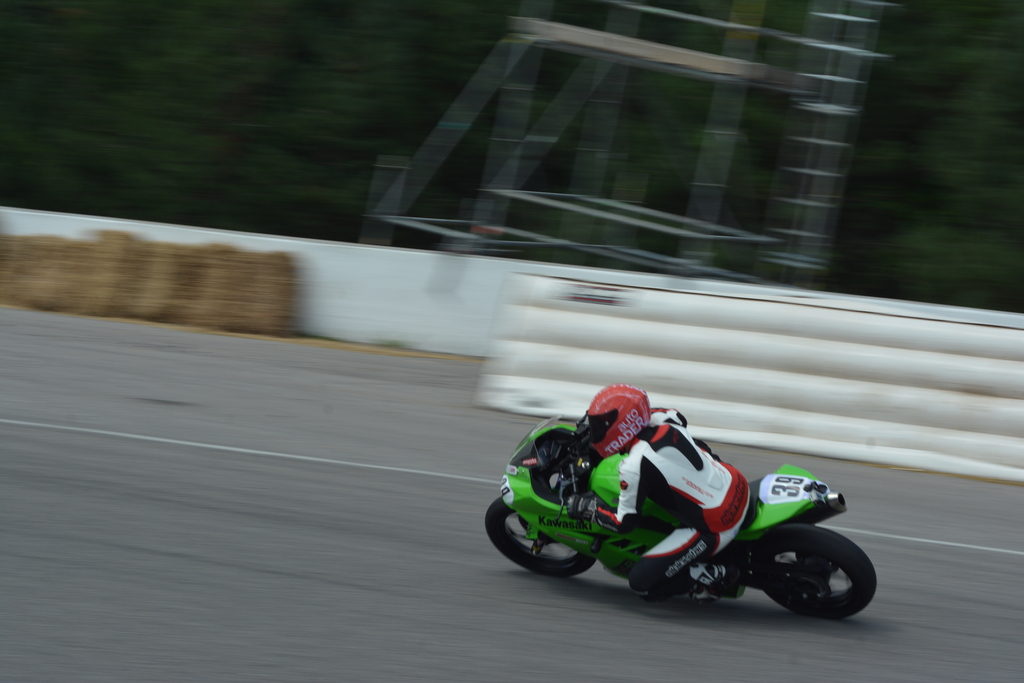 The bike itself is forgiving, the brakes could use more power but when the bike does scrub off speed there’s surprisingly little pitch. The engine needs high revs – anything under 9,500 rpm and you almost want to get off and push the thing – especially up CTMP’s long back straight.

The Hindle exhaust fitted to these bikes gives them a throaty, rorty bark that is genuinely sporty. It transforms the aural character of the wee little parallel twin into something more appropriate for the track.

My 5'6" frame fit nicely, only my significant belly prevented me getting into the best position for aerodynamics and cornering. I found myself scraping a toe once or twice but corrected that with better body position and foot position.

The front suspension could offer more feedback but it never felt unstable for me. The rear shock likewise.  You barely need the brake at CTMP, only brushing it at turn five – and the really fast guys don’t even use it there. The bike is the absolute definition of small and agile, it feels almost impossible to crash.

Except of course, I did.

Last year, Kawasaki had debuted this series with an invitational race here at Canadian Tire Motorsport Park (Mosport, to the stubborn). There some 20 guests and journalists including Flat Track star Doug Lawrence and sometime autoTRADER.ca contributor Costa Mouzouris went elbow-to-elbow in a dramatic proof of concept that fuelled a ton of interest.

But complications led to a late program launch and grid numbers were lower than expected for 2016.

Perhaps because of that, and perhaps because I whined and moaned to Kawasaki PR manager Brad Goodbody, I was offered a turn this year. This was my road racing debut.

In the lead up to the event, Canada Moto Guide editor (and sometimes autoTRADER.ca contributor) Mark Richardson was also offered a spot for his publication. We at autoTRADER put our editor on the front line, CMG’s cowardly lion chose to use a ringer.  Brad Goodbody from Kawasaki would also be joining us. Until lap three at least. 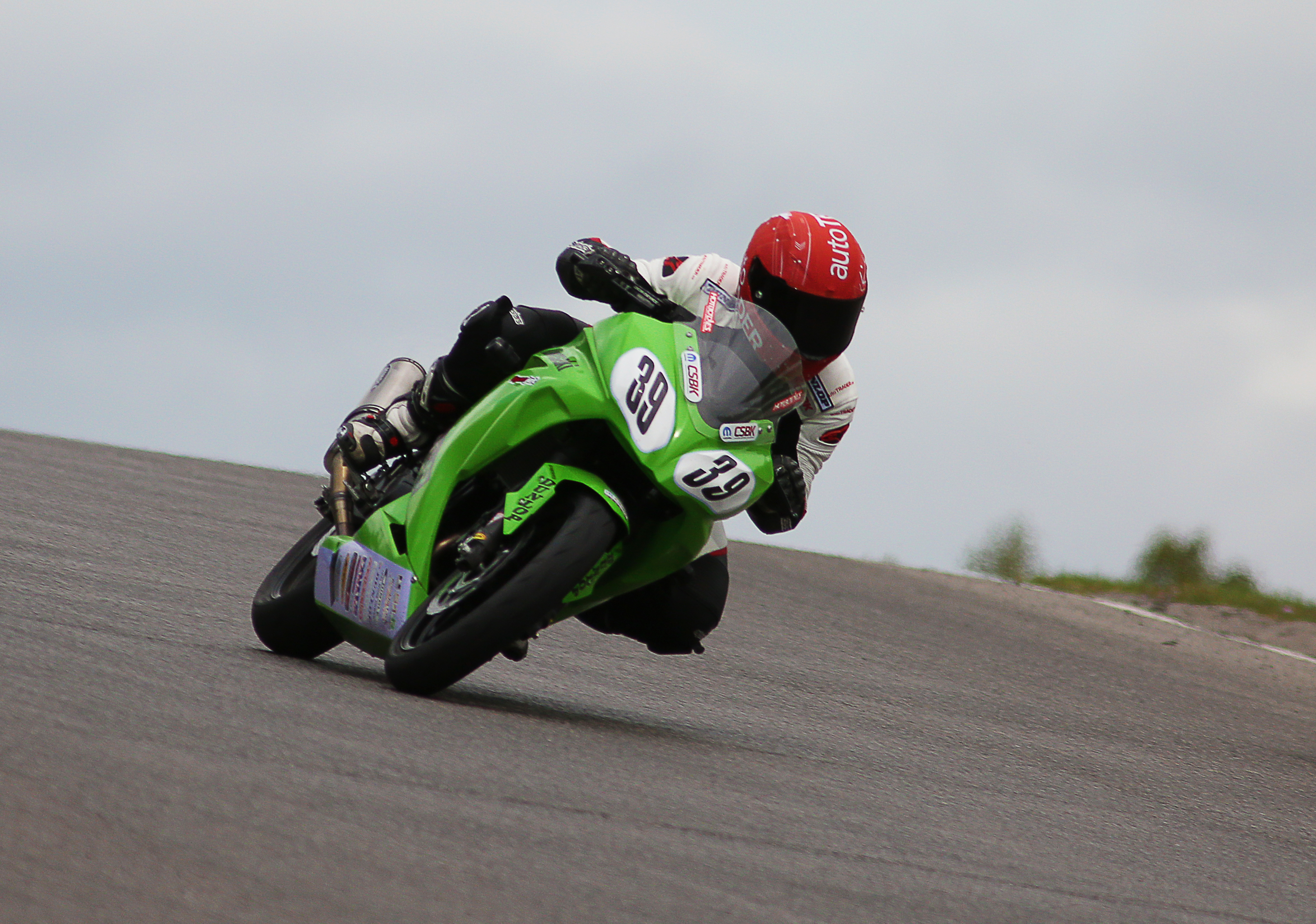 A good-natured online war of words was waged, one I promised my wife I wouldn’t take too seriously. In the first Friday practice session I was cheerful but frustrated. At 1 minute 54 seconds I was a full eight seconds behind Jean-Pascal Schroeder, CMG’s veteran CBR 250 racer. By the end of the day I was in the 1m53s, and eighth of 16 riders.

Saturday morning qualifying saw me latch on immediately to some of the faster guys ahead, with their lines and their aerodynamic tow I immediately dropped into the 1m46s bracket. JP was doing 1m45s. I knew the way around now, I had a sniff at a mid-pack finish.

In race one I started 11th and clawed my way as high as 8th before settling into a rhythm in 10th. A lapped rider on lap six caused me to lose touch with my pack and from there I rode a consistent but lonely race home.

Veteran rider and all-around champion Costa Mouzouris had given me plenty of advice and it was paying off. I was learning, I was getting faster. Mark Richardson even offered some begrudging (and ultimately premature) words of respect.

Sunday’s practice was wet but enthralling. In the damper conditions I found my pace to be close to those at the front, I even passed Schroeder briefly. But I was looking forward to a dry race. 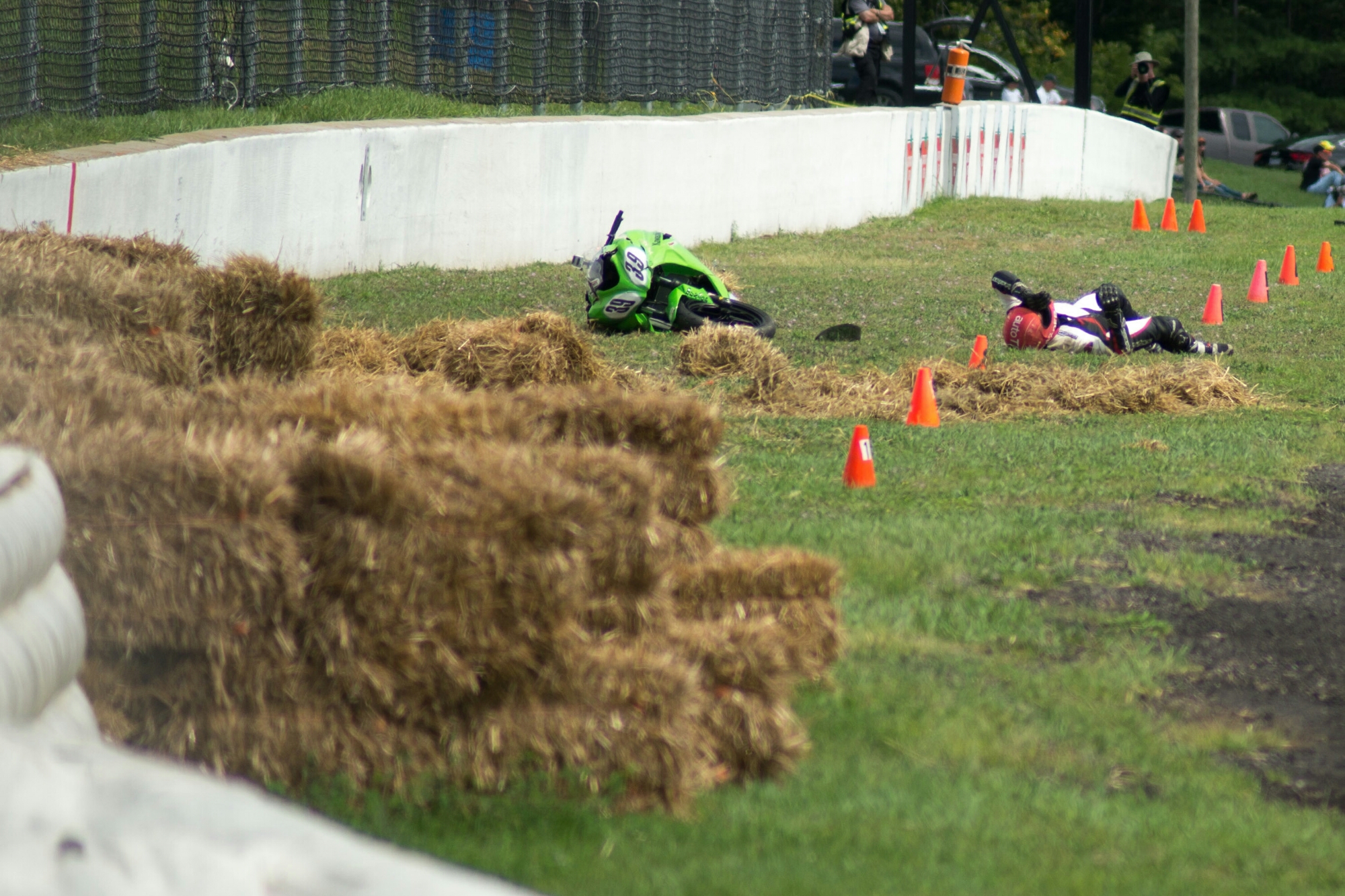 A niggling problem caused me to lose the draft again though, and I pitted early out of that morning session.

I should have kept practicing.

The Ninjas are fitted with a quick-shifter, a valuable device I enjoy using a lot, but hadn’t used in real anger before.  When in a full tuck on the back stretch the slightest touch of the lever with the side of my boot caused the engine to cut power. It’s rider error, your boot shouldn’t be resting there, but as I impatiently watched the tach needle climb I guess I was cocking my boot, waiting.

I vowed I wouldn’t make this mistake in the race. Nor would I be timid with lapped traffic.

My start from the inside of the third row was a good one, I climbed into eighth again before dropping back a touch. Bodhi Edie, a CSBK ace who decided to run on Sunday in this category soon rounded me up and I sat back slightly from a heated battle ahead. I had Kawasaki Canada mechanic Jean-Philippe Brunet keeping me busy for a while, and he got buy not long after Edie and Goodbody crashed out.

All the while, my nemesis, JP Schroeder, was falling back into my clutches. On lap seven we cleared some backmarkers, this time scything by quickly so as not to lose my drafting partners. On lap eight it was Schroeder directly ahead of me, and I was making ground.

Out of Moss Corner (turn five) I was in sniffing distance, tucked in, bum up, poised to draft by JP. I lost concentration momentarily, my boot grazed the quick-shifter and the soft-cut cost me power, speed and time. I’d lost three or four bike lengths. Lengths I needed to get back before the main straight, and certainly before we got back around to the long Mario Andretti straight. 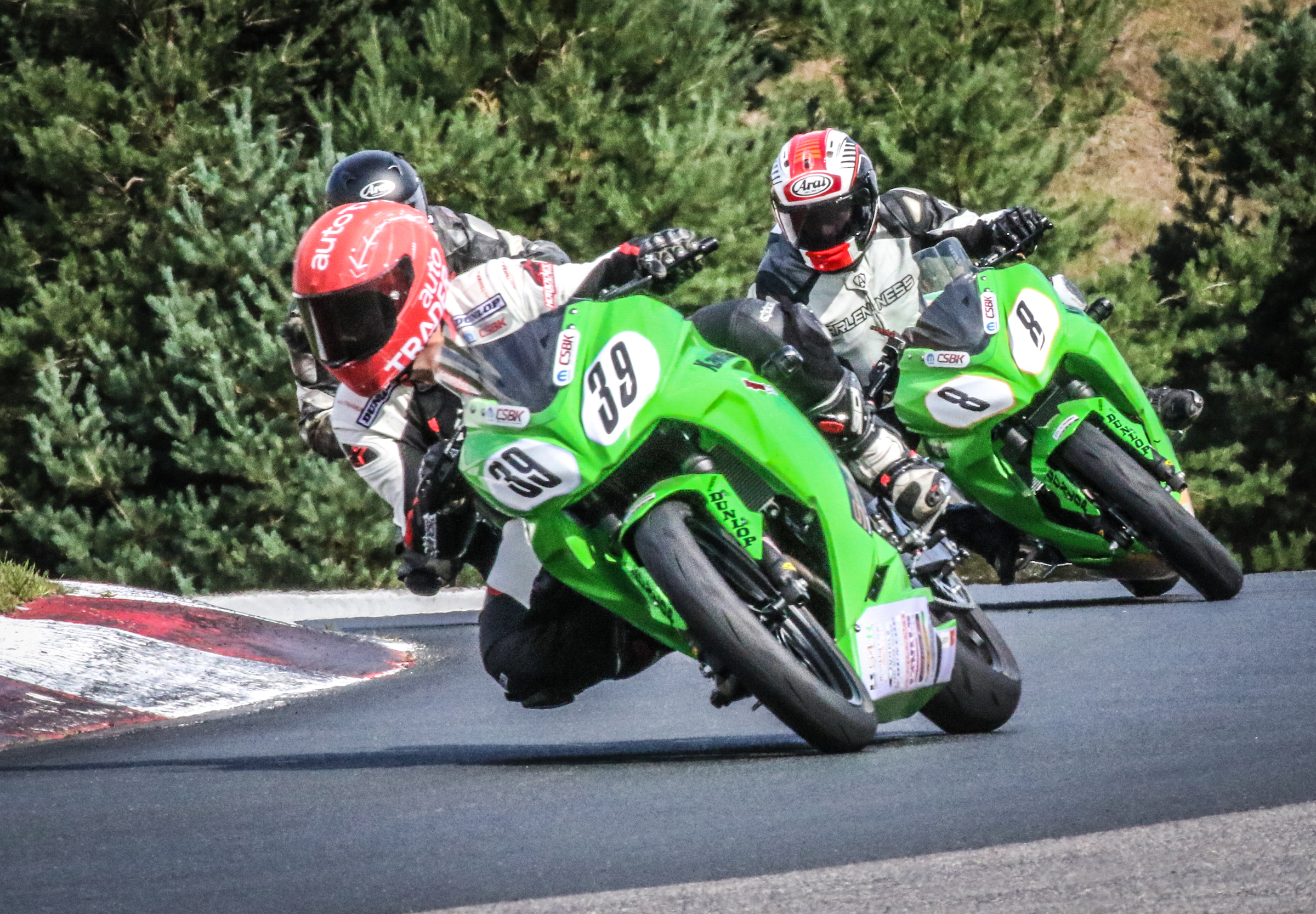 Through turn eight I pushed harder than I had all weekend, before kicking it down a gear and diving through turn nine – I drew closer, but I needed to be right on JP’s tail. Eyes locked on him I decided to forgo my usual downshift into turn 10 and try to get through it in fifth.

Always race the track. Never race the riders in front.

As I passed through turn 10 I gave the little Ninja a big wrist full of throttle, showing a complete disrespect for the 38 hp it dealt out.

The video shows a big vibration right around then as the front shook its head, I sat up, ran wide and the rest, as they say, is history.

There were lots of mistakes in the end. Buzzing the quick-shifter was one, watching JP and not myself was the other. A bit of loss of concentration. Mental fatigue? Maybe. Too much speed? Maybe, but maybe with better body position, more smoothness and a better line I’d have made it?

It’s never as simple as “too fast” – and yet it also always is.

My learning curve was over. My ego suffered most of the damage. The Kawasaki the rest.

But What About the Real Racers? 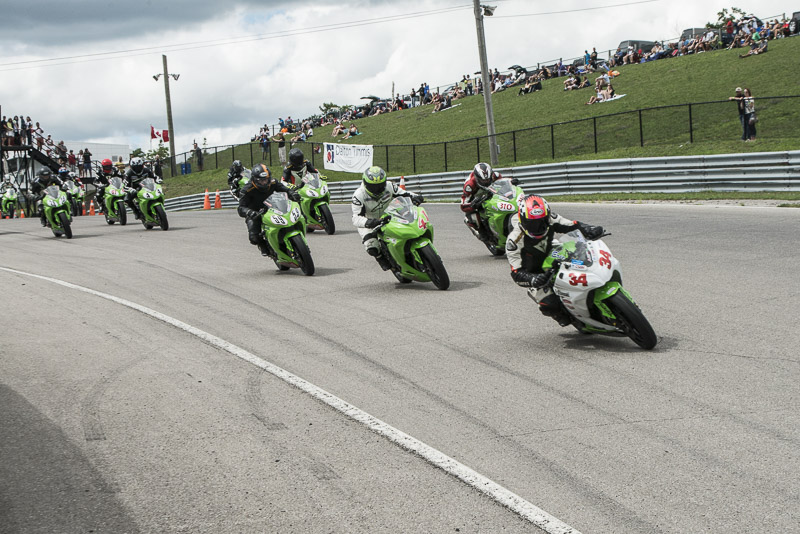 Sixteen-year-old Brandon Pemberton of Nova Scotia claimed the title with second on Sunday, with Eric Quintin second after finishing third in the race.

Inside Motorcycle’s own ringer, Dave Minnett, was the best of the media with fifth on Sunday. His under-the-radar ride also netted him a third on Saturday, but we media types weren’t eligible for trophies or podiums. Not official ones anyway. JP and I might still send him one. Mark Richardson should pay for it.

Jared Walker won the Jacob-shortened race, and when your writer went to congratulate the teenager on the podium, his first question was, “Are you alright?” That young kids with talent and true class have an opportunity to hone their skills in a series like this is a valuable thing. Spec classes in racing, especially affordable ones like this one, and also like the Nissan Micra Cup over on the four-wheel side of things, give rising Canadian stars a chance to shine – especially when they’re attached as support races to the bigger national categories.

Canadian Superbikes champion Jordan Szoke might have claimed a perfect season, but you can bet that he and all the other CSBK aces are watching who's coming up through the ranks.

There is a healthy field of amateur racers dipping their toes in too. Some, like Larry L’Ecuyer from Niagara Race Crafters and his rider Robert Lepp made their debut at this round, with the intention of running more races next year.

They’ve become enamoured with the little green Ninjas and are keen to get amongst this highly competitive field.