If you're ever forced to sit through the product presentation for a new car, you'll likely hear the following three terms: emotional, dynamic, aggressive. An unholy trinity of buzzwords, they're duly trotted out any time the buying public is expected to choke down another massive-grilled crossover that looks like its been designed to turn pedestrians into shoestring fries. Frankly, I've had enough: one palate-cleansing lemon sorbet, please!

This little limoncello wonder is a 1958 Fiat 600 Jolly, an extremely rare toy for the yachting set. It is a toy for the mega-rich of the past, but it is also a refutation of the current trend that seems to dictate every new car needs to look like a killer robot. When you drive past in a spindle-grille Lexus F-Sport, pedestrians avert their eyes. When you tootle along in this thing, you're spreading joy everywhere you go. No wonder they call it a Jolly: it's the most jovial thing this side of Santa Claus.

Some of you are probably thinking this car looks a little familiar – if you've watched Comedians in Cars Getting Coffee, Jerry Seinfeld chooses a Fiat Jolly 500 as the perfect car for driving around with Louis CK. This one happens to be based on the more-powerful Fiat 600, but it is equally silly. 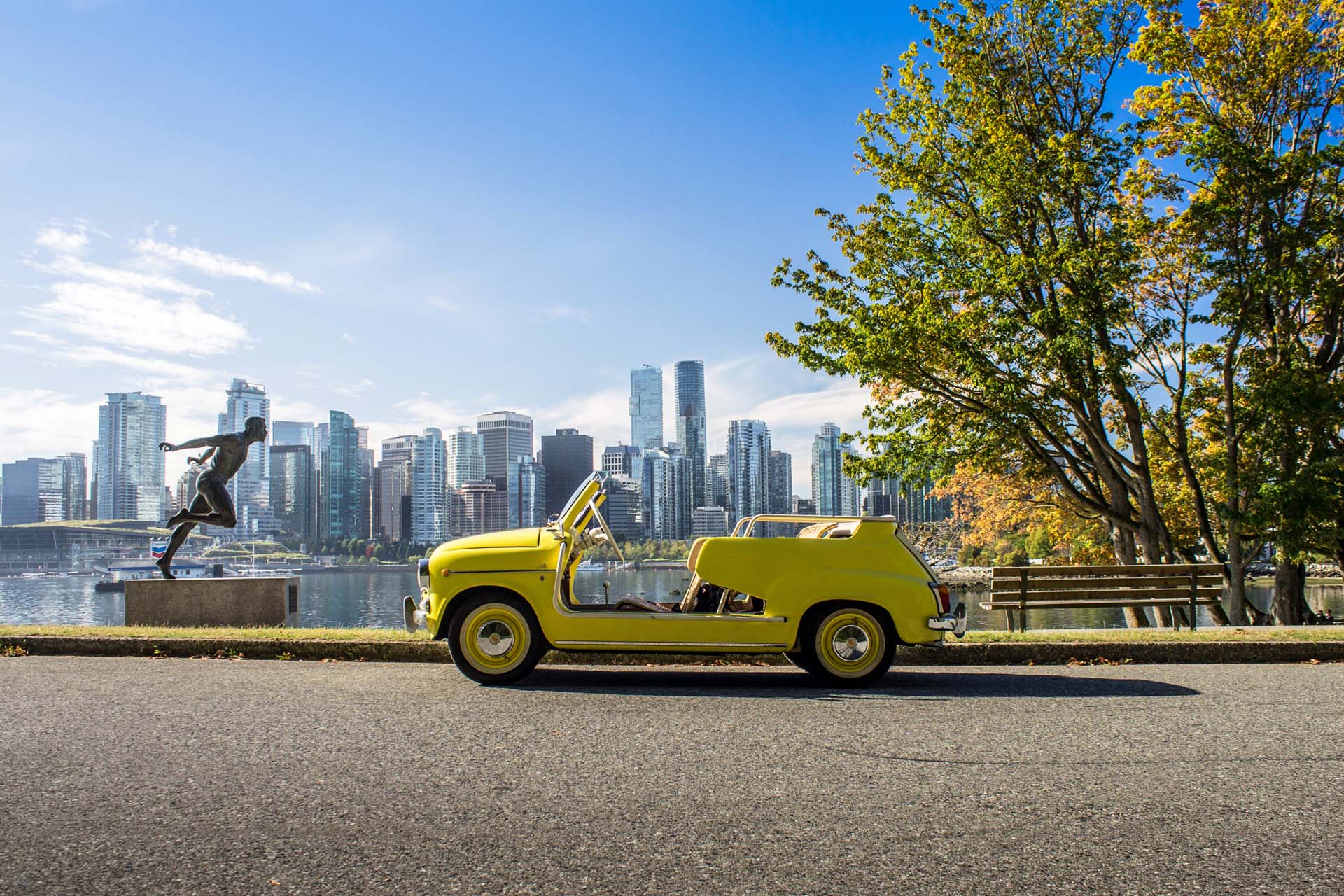 The Jolly belongs to a unique class of machines called beach cars. Intended for use in the sunny climes of the French and Italian Riviera, they were built as a sort of land-going dinghy for the yachts of the super-rich.

You can trace the first of these back to Fiat president Gianni Agnelli. A sort of Italianate Beau Brummel, the fashionable Agnelli was known as the Rake of the Riviera, and was adored by high society. Needing some wheels to get from one romantic assignation to the next, he commissioned Ghia to build him a special, open version of the diminutive Fiat 500. Despite its small size and reasonable pricing, the Cinquecento was already something of a stylish choice – certainly so for the president of the company. Opened to the warm sunshine and fitted with springy wicker chairs and a removable fabric roof, the Jolly was an even better representation of la dolce vita.

Seeing Agnelli dashing around town in his funny little car, the elite of Europe went completely mental for beach cars. They were made out of several types of cars, including the Renault 4CV and the Fiat Multipla van. As the more powerful Fiat 600 replaced the original 500 city car, a few were converted to Jollys as well. Fewer than 100 remain.

About four days before this, I put nearly a thousand kilometres on a bright red Lamborghini Huracán. Nobody cared. With this thing, we don't even get out of the underground parking in Vancouver's West End before a crowd of curious onlookers starts gathering.

Let's relist the 600 Jolly's main attributes. It has a 633 cc inline-four making just over 20 hp. It has a very short two-metre wheelbase, a four-speed manual gearbox with synchros, and drum brakes. Also, as we've mentioned, wicker seats and no doors. 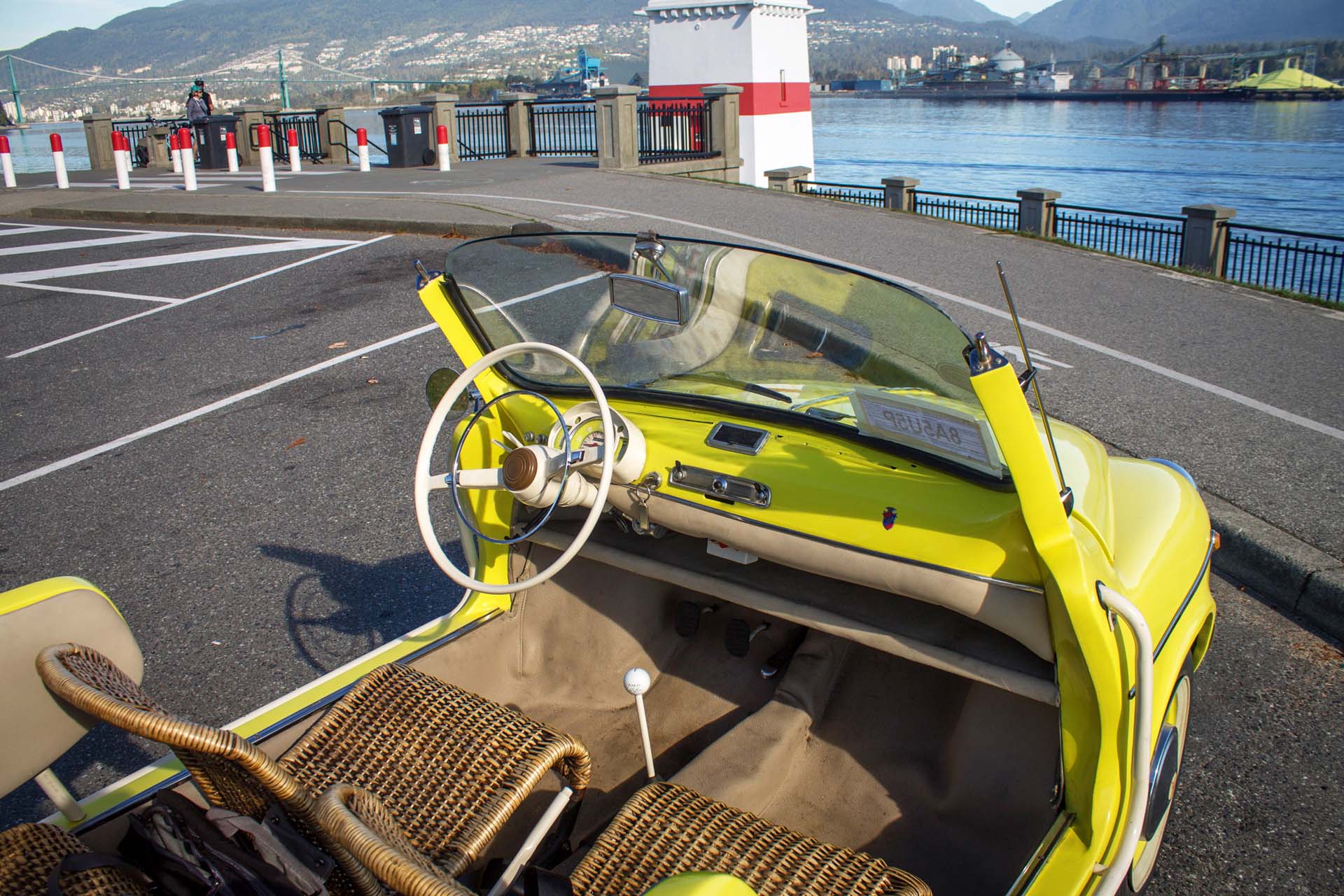 Driving a car fitted with lawn chairs takes a little mental readjustment. While this one has at least been fitted with lap-belts as a safety requirement, the original would have driver and passenger unrestrained. Probably fine for 1950s Monaco, less so for 2016 Vancouver with giant crossovers everywhere.

The Jolly uses up a good half-dozen spritzes of Quick Start down its carburetor before it's ready to go, but once it's running, it's a delight. Twenty-one horsepower is not very much, but when you're entirely exposed to the elements (and death, dismemberment, etc.), it's more than adequate. Because it weighs as much as a picnic basket, acceleration and braking are pretty good.

The tiny four-pot buzzes away merrily as we make our way over towards Stanley Park and the local yacht club. Agnelli used to have his 500 winched on and off his 82-foot yacht, the Agneta, so it seems fitting to begin our adventure here. The plan is simple: get coffee, and survive.

Puttering around Stanley Park's perimeter is a delight. A number of Jollys were sold off to resort communities, and as a low-speed runabout, it's really rather good. Think of it as the equivalent to a golf cart and you get the general idea. However, the open road beckons.

The Lion's Gate Bridge is a Vancouver landmark, towering high above the waters of the harbour. While it's been widened from its original form, it's still quite a narrow structure, but the view of the North Shore mountains as you reach the heights of mid-span is utterly spectacular. 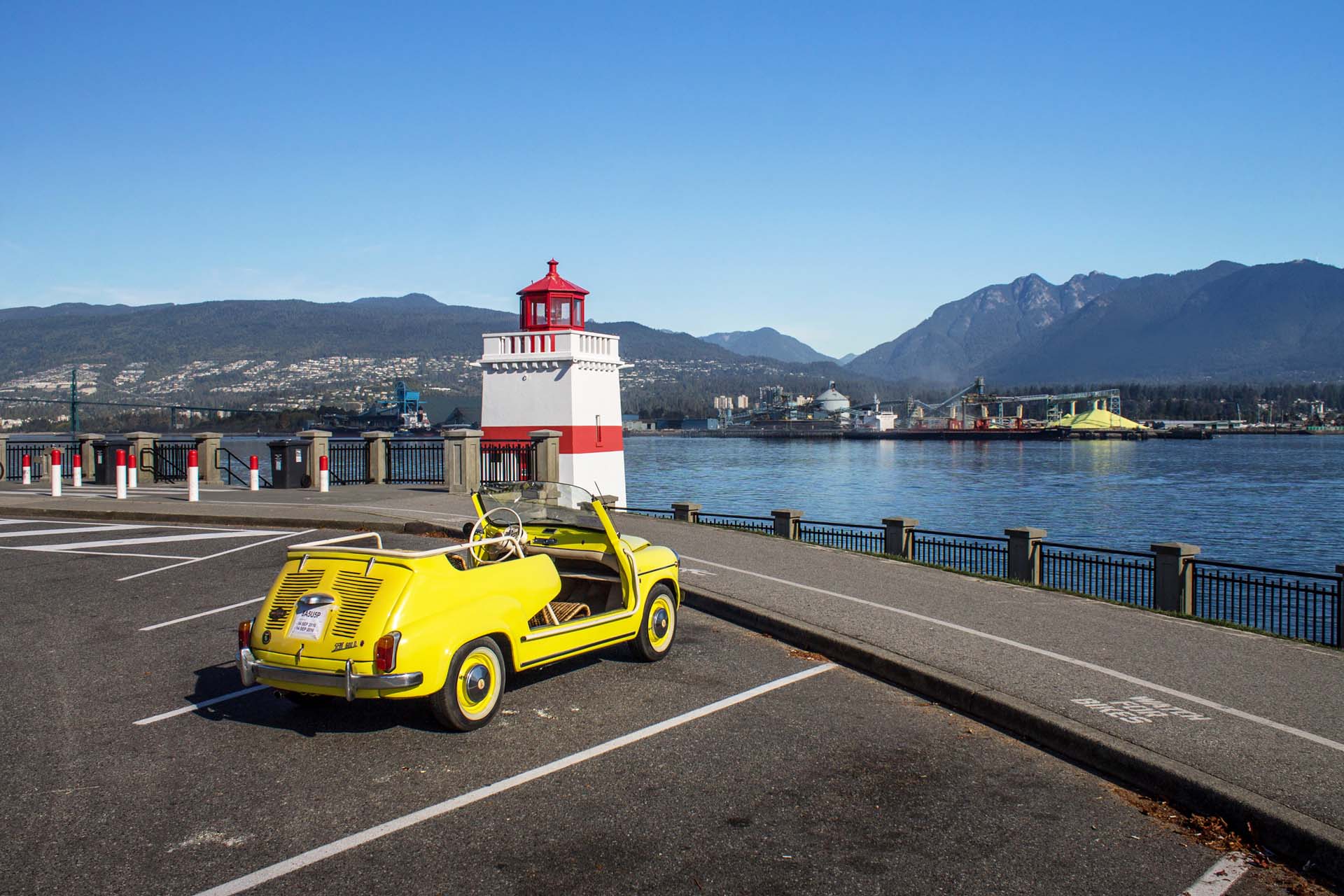 Assuming, that is, you're not currently crapping your pants in a tiny Italian convertible with the crash-protection of a Kinder Surprise egg. The Jolly's charm isn't just an attractant to pedestrians; it's a bright yellow lure for people trying to take pictures with their smartphones while they should be paying attention to driving.

Terrifying doesn't cover it. However, I live through the experience and then turn around and do it all over again. This must be what it was like to be a pioneering aviator.

Our Jolly is in decent condition, but it's a driver, not a show car. The steering is thus a trifle vague – you can apply several degrees of input before anything happens. The speedometer doesn't work at all, but the chances of getting a speeding ticket are like champagne on the moon: nonexistent.

The Jolly belongs to my friend Helen who, apparently concerned that our little parade isn't ridiculous enough, has us make a stop. She pops into the parkade and returns with the Jolly's stablemate, a red 1938 MG TD. Also, perhaps at this point I should mention that she's been wearing a leather flying helmet and goggles the whole time. 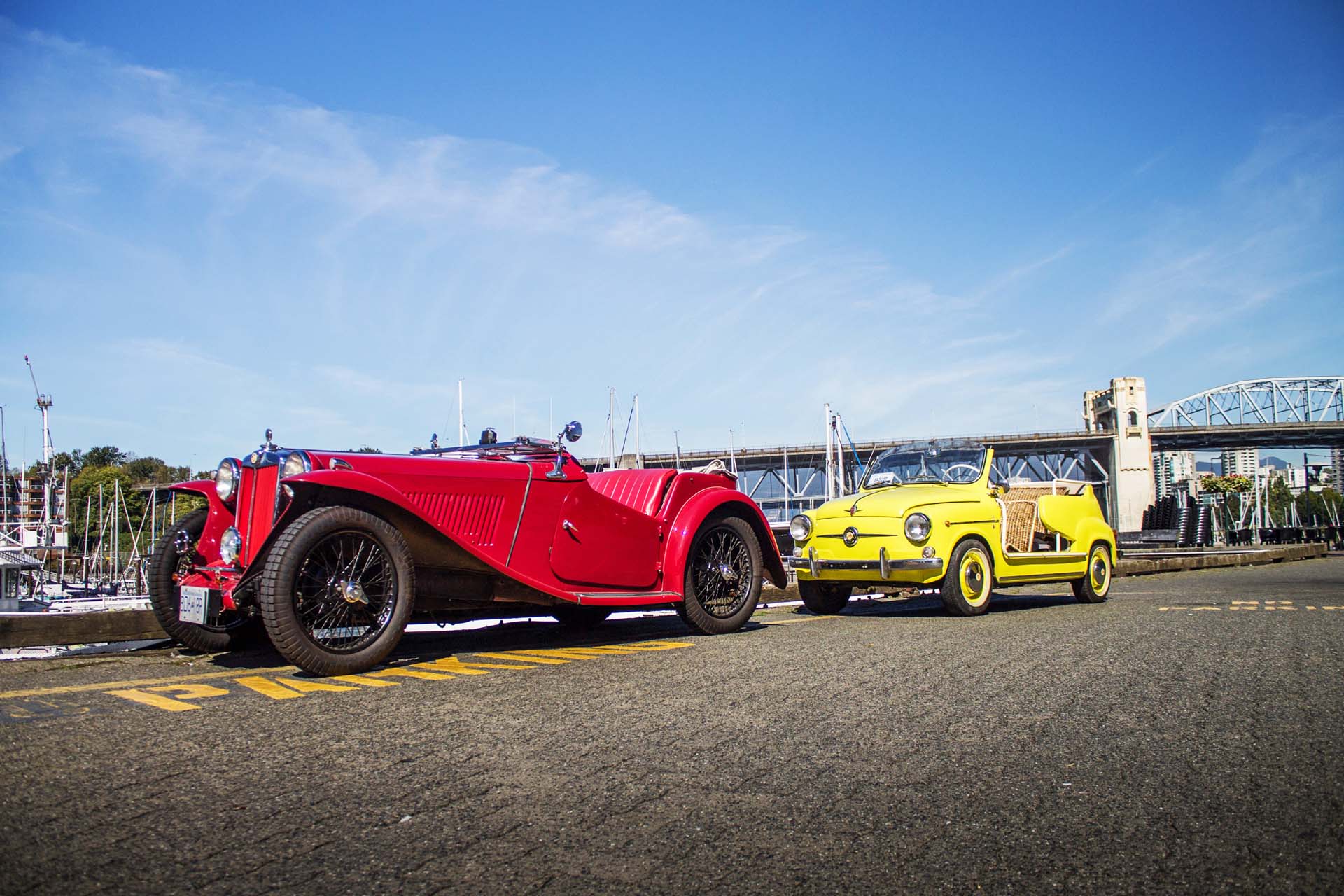 I prod the Jolly to life after a couple cranks of the starter. Helen lights up an enormous cigar. Together, we head right through downtown and out towards the tourist attraction of Granville Island.

Everywhere we go, people start laughing. They stop, they stare, they nudge their walking mates, and they laugh. It's not the mean-spirited kind of laughter either; it's the spontaneous outpouring of delight.

Driving is fun. We spend too much time making it serious, drawing out the delight of puttering around into Nürburgring times and traffic worries and ruminating about the coming autonomous future. But the Jolly isn't about any of that – it's about fun. Ho ho ho. It scares the pants off me, but I love it.