Mazda's Millionth MX-5 made its lone Canadian stop today, at Mazda Canada's Richmond Hill, Ontario, headquarters. The MX-5 started production in April 1989, and the millionth unit rolled off the line in April of this year. That lucky Roadster has been touring the world ever since.

Miata clubs, fans, and enthusiasts from across the country made the trek to see the historic car. Maybe the most ambitious were a pair of club members from BC who drove their first generation Miata more than half way across Canada to attend.

Along the way the special MX-5, which is a 1.5L Japanese spec car, has collected signatures of owners and fans across the world. The first 250 lucky people to arrive at the Richmond Hill event got to add their signatures to what will be 13,050 signatures covering the car by the time the tour is complete. 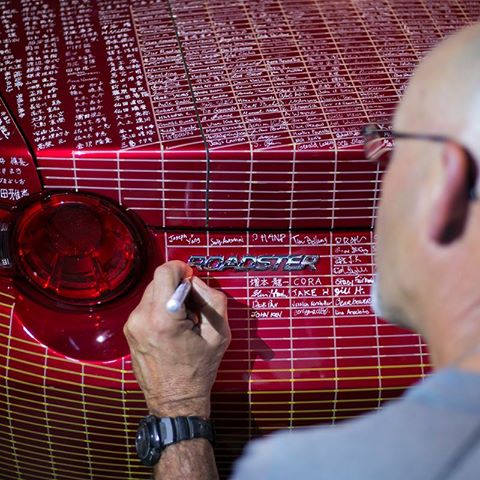 Beginning at the Hiroshima Flower Festival last May, the fourth generation, or ND, MX-5 (Miata to much of the world) has traveled to the Goodwood Festival of Speed in England, before touring Europe, the U.S., and finally arriving in Canada. Following this stop, the car is headed to Australia. At the end of the tour, the MX-5 will be added to Mazda's museum at its headquarters in Hiroshima.