The Blizzard Mountain DLC expansion for the already content-packed Forza Horizon 3 arrived this week, bringing with it a new destination, new cars, snowy and icy terrain, and occasional white-out conditions. Having absorbed all the winter driving wisdom of our knowledgeable, experienced (and possibly insane) writers, I was ready to hit the slopes and become King of the Mountain.

Podium finish? Um, let me get back to you on that, right after I rewind and try this corner again.

Yeah, uh, you might want to go grab a coffee – this’ll take a while.

Now, I’m not usually this bad at racing games. I’ve been playing since Pole Position on the NES, and years of Mario Kart in its various incarnations have taught me that rubbing’s racing, and smashing into your opponents to course-correct is not only permissible, it’s de rigueur.

Which is a problem when you switch to simulation-style racing games where drifting doesn’t give you a magical boost of speed and hitting boxes in the road doesn’t give you a thoroughly antisocial power-up with which to annihilate your opponents. To say nothing of hitting your opponents mid-corner to scrub off speed: while you’re engaged in vehicular tango, the other racers simply zoom past, leaving you and your partner in the dust, or in this case, crisp powder.

There’s a wonderful simplicity to games like Mario Kart, where you have buttons for “Go” and “Stop”, “on” and “off”. The problem is that modern video games are played with modern video game controllers, where the buttons themselves go from “on” to “off”, but also track everything in between. In order to win on Blizzard Mountain, you’ll need to trade your digital lead foot for some deft analog finger work. If there was ever a reason to invest in a proper wheel and pedal set-up, this would be it: as much as I love the feedback of the Xbox One controller and its responsive triggers, the white-knuckle eagle claw death grip I usually adopt on the final lap really doesn’t lend itself to smooth, gradual input.

Yes, having made it through three separate iterations of the Forza Horizon series, and double that of the main Forza Motorsport line, and countless other racing games on nothing more than what some might call sheer grit, I have been humbled by a little bit (okay, a lot) of white stuff. 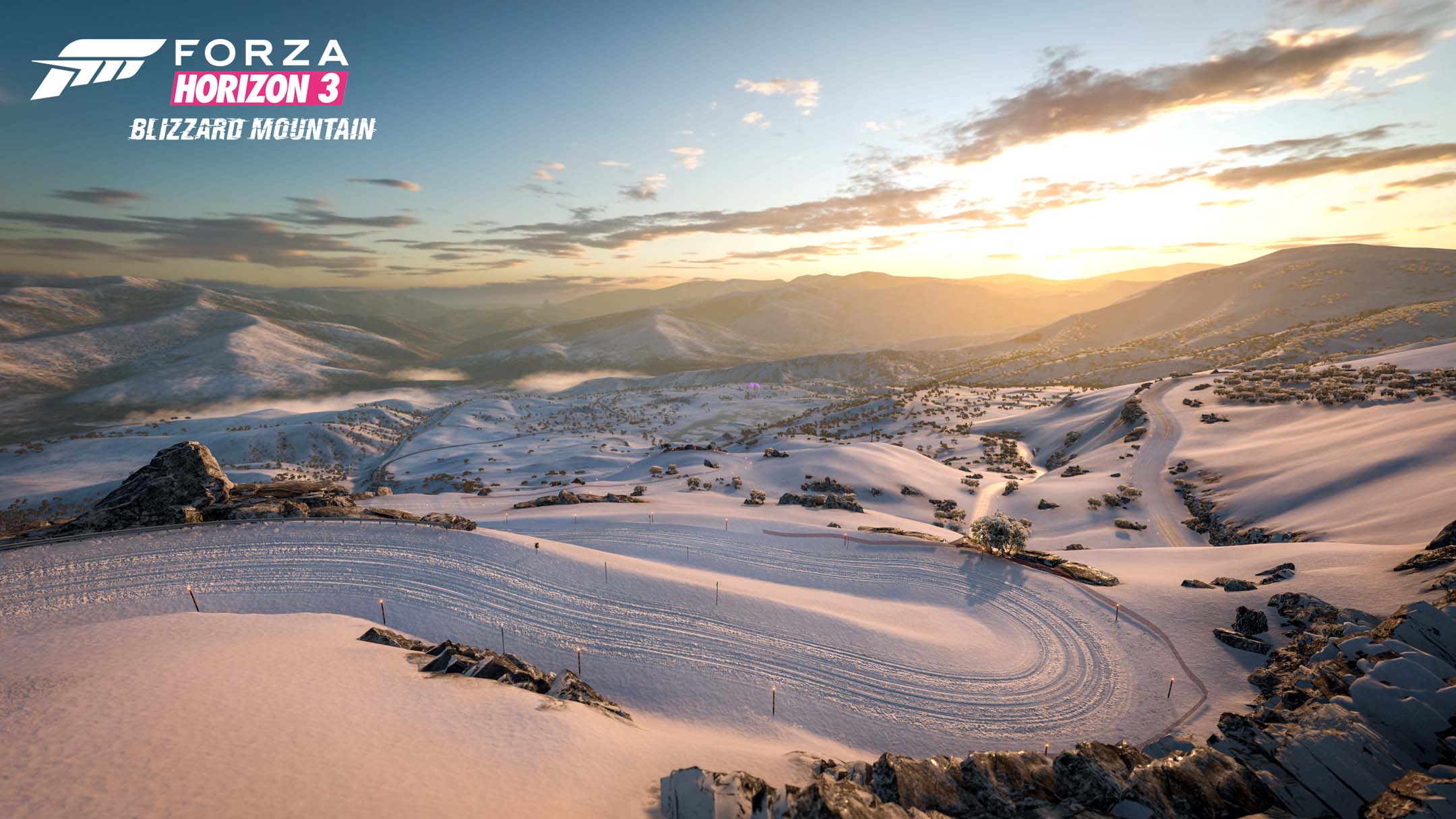 It all starts atop Blizzard Peak, where you’re dropped into near-zero visibility in a Ford Focus RS with bright Gymkhana badging, to channel your inner Ken Block. There’s this moment when the snow lifts, the sun comes out and a winter landscape of shimmering powder, charming chalets and majestic mountains stretches to the horizon.

Or it’s one of those charming chalets. Or a retaining wall. Or an intransigent rocky crag. Or a 70-degree slope that absolutely defies upward progress.

Blizzard Mountain is still a sandbox, but the sand has frozen over and doesn’t cater to your whim. Especially your flavour of whimsy involves off-roading in any direction other than down, down, into the embrace of gravity. 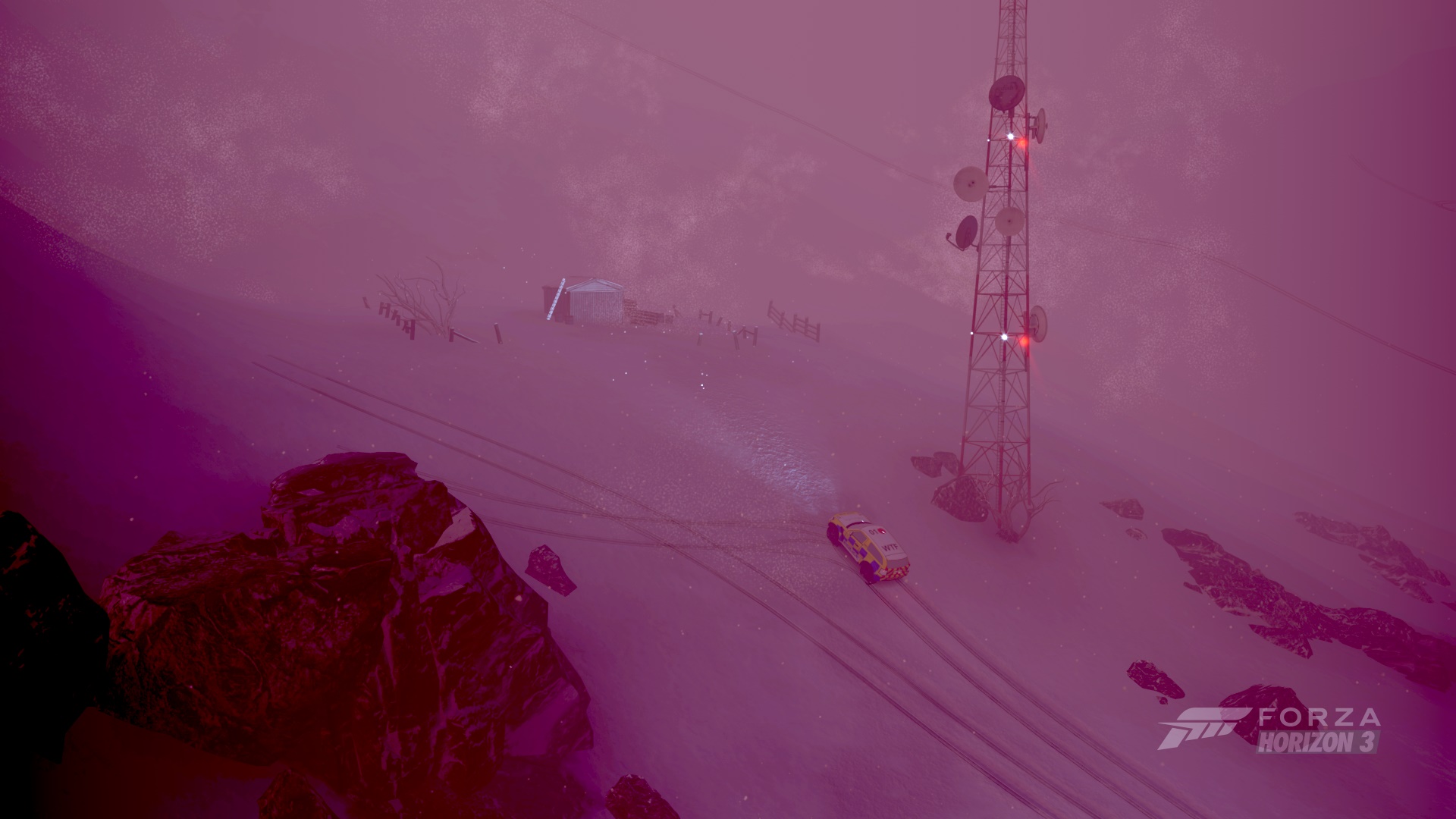 Rather than comparing it to the other Horizon Festival locations of Yarra Valley or the Outback (which, by the way, you’ll need to have unlocked in order to access Blizzard Mountain itself), it’s better to think the expansion as a separate game mode. After all, it even runs on a different progression system; instead of earning fans to unlock further events, you’re challenged to earn stars at each event you attend. It seems easy enough at first: one star for completing the event, two stars for taking first place, and three stars for winning and also fulfilling a style objective, such as executing a number of drifts or racking up a certain number of style points during the race. 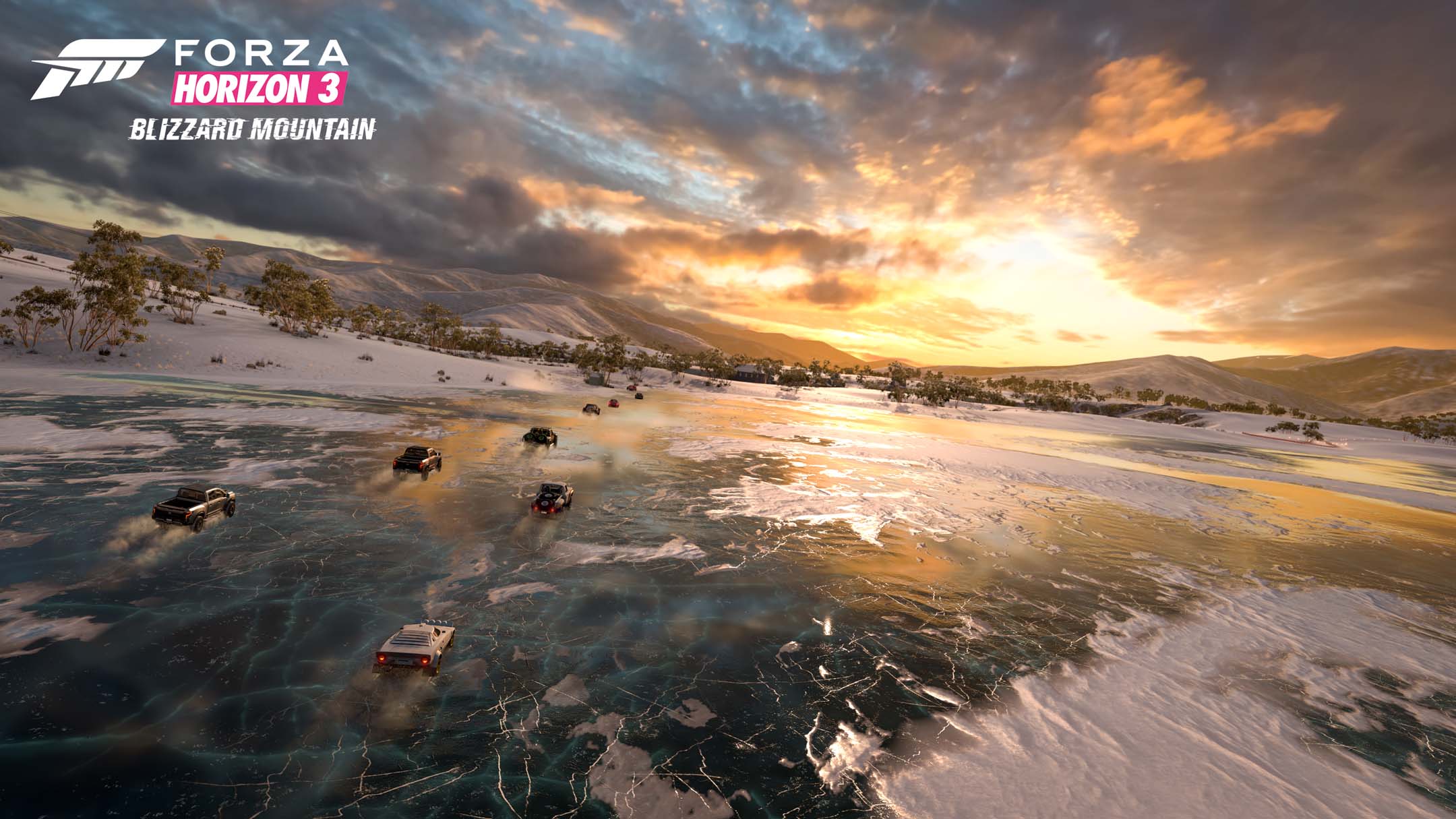 Forza Horizon 3 has always been slightly more rough-and-tumble due to its off-road focus, and the AI has been balanced to be rather forgiving when you drift off track. On Blizzard Mountain, however, when you lose traction and speed, it takes much longer to recover, and a race can be lost in a single corner a mile away from the finish. On the slopes, the environment provides all the rough-and-tumble, your job is to be the smooth operator. And if that doesn’t work, your only recourse is to bump the AI difficult down a notch.

You’re rewarded for your perseverance with some truly satisfying victories, where you capitalize on an opponent’s split-second error in judging that last turn, and tuck in between them and the checkpoint marker, just praying that your wheels will keep their grip to carry you through, then it’s done, and you’re clear and ahead, with them chasing your rear bumper all the way to the finish line.

If you prefer to explore the scenery at your own pace, Playground Games has crafted an exquisitely detailed, beautifully rendered landscape. The visuals get that all-important Canadian stamp of approval: yes, it looks like snow. Accumulation on the ground shimmers under your headlights, flakes in the air are large and fluffy; stuff that comes off your tires is unrealistically pristine, but hey, nobody likes dirty slush anyway. 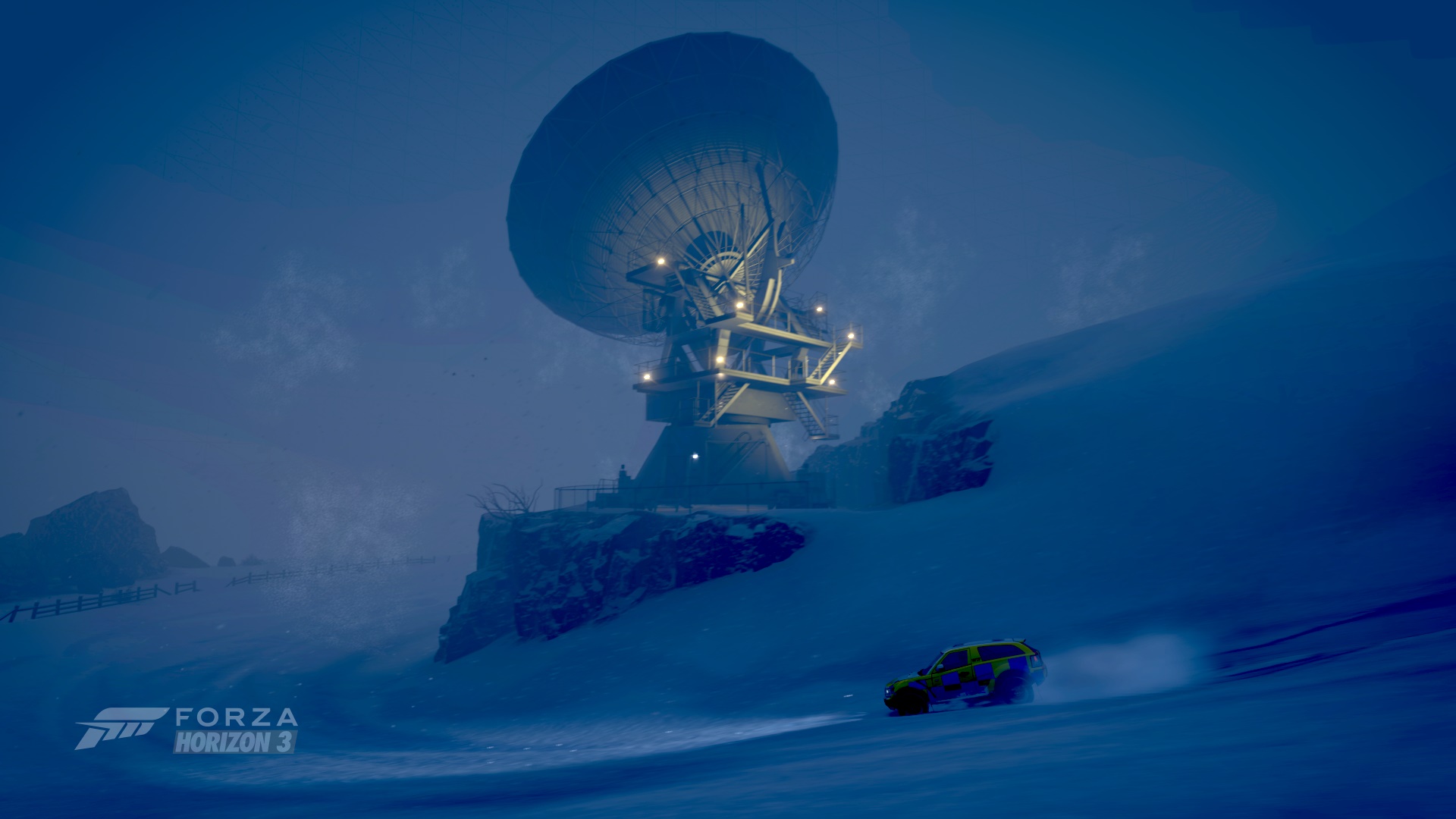 In addition to the races, there are a number of one-off challenges the same as what you’ll find in the main game: bucket lists, drift zones, speed traps and more. It’s a full-fledged expansion, with all the trimmings. (And if you turn on the in-game radio, every DJ gets a fresh set of commentary unique to Blizzard Mountain.)

But what it really is, is a winter driving academy. Like the programs offered by Porsche and Mercedes-Benz (and AMG), you get a true sense of your vehicle’s capabilities in the most adverse conditions, where grip is minimal, and smooth steering and even throttle input are paramount. In order to come out on top, you’ll need to work in tandem with your car, pushing it almost to the tires’ breaking point, shifting the distribution of weight so that your drive wheels can propel you through the turn. The glowing racing line on the ground is no longer just a recommendation, but a lifeline that is your only ticket to the winner’s podium.

Expansion packs, by definition, offer more of the same. And if that’s all Blizzard Mountain was, I’d tell you to hang on to your money – there’s already an obscene amount of content in Forza Horizon 3. But out there on the slopes, you’re not in for a wild and raucous romp or a lazy Sunday drive. You’re faced with unique technical challenges that ask you to bring everything you’ve learned – and more – in order to face down its austere beauty.

The Blizzard Mountain expansion DLC for Forza Horizon 3 is available now on Xbox One and Windows 10.