Evolution of the Volkswagen Microbus

It’s a rough sketch on the lined paper of a ring-bound notebook, the kind of thing a kid might draw instead of paying attention in math class. Everything that’s familiar is there: the loaf-of-bread shape, the pushed-forward cabin, the low-mounted rear engine with a swing-open access panel. The date at the top of the page seems impossible – April 23, 1947 – but there it is: the first. 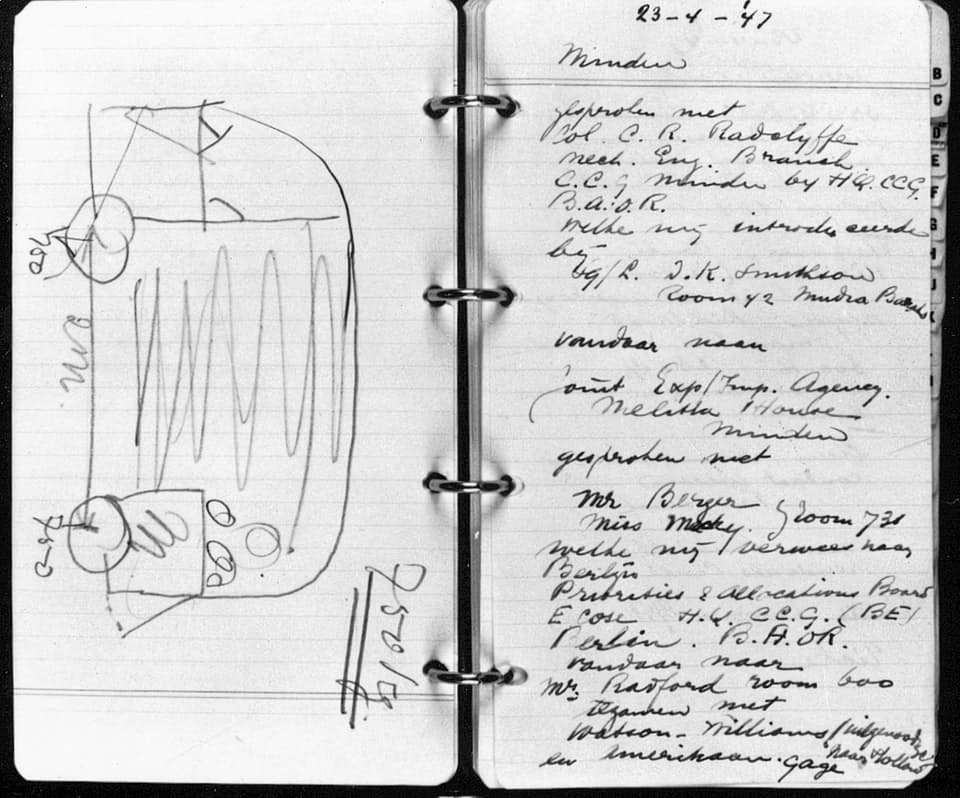 It’s hard to think of a car that means so much to such a broad swathe of people. The VW Microbus (alternatively called the Type-2, T2, Splittie, Kombi, Bulli, Rugbrød, Westy, Transporter, or Hippiemobile, depending on location and format) is a cultural touchstone for many of us. There were faster cars, in fact, pretty much nothing could be slower, but in terms of excitement, this little van still fires up the imagination like no other.

VW’s recent announcement of its all-electric ID Buzz concept shows that the idea of the house-on-wheels Volkswagen still holds a lasting appeal. With the future of the VW Microbus perhaps just around the corner, here’s a look back at its past.

That first drawing of a rudimentary van powered by the Volkswagen Beetle’s simple air-cooled powertrain can be credited to a Dutchman named Ben Pon. Pon was an early importer of VWs, bringing the little cars into the Netherlands immediately after the war. As he toured the VW factory in 1946, just as it was beginning to get back into production under the direction of the British, he watched improvised parts-carriers shuttling around and had an idea. 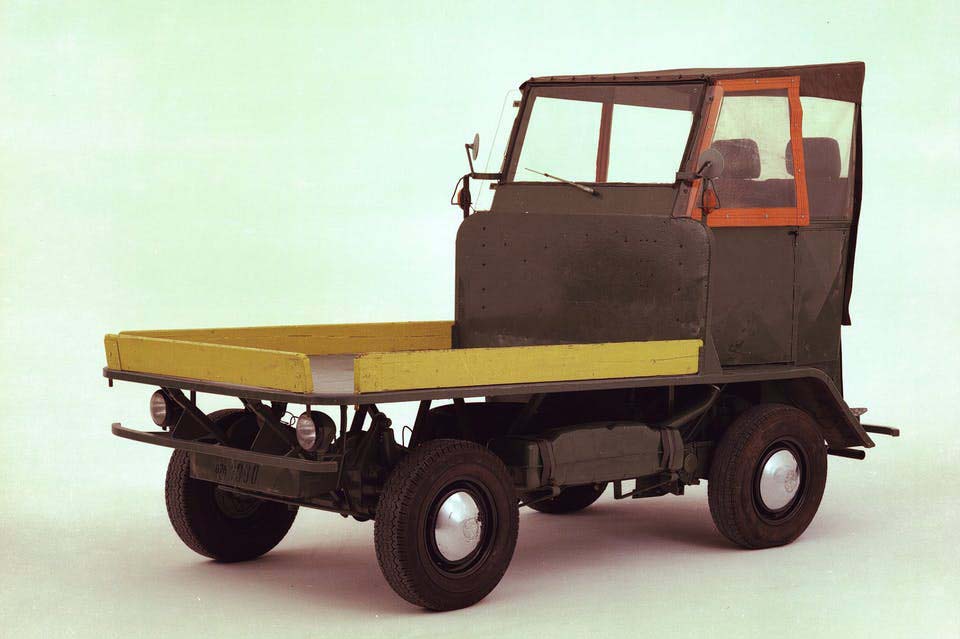 The front-loaded parts-carriers, called Plattenwagens, were jerry-rigged out of bare VW chassis, and Pon realized a van based on the Beetle would be of great use in the post-War recovery. He made a sketch in his notebook, reversing the Plattenwagen’s layout and suggesting an optimal payload of 650 kg. However, the factory was far too busy trying to keep up with demand for the Type-1 Beetle. As an aside, the Plattenwagen turned out to be so ridiculously reliable that VW didn’t retire the last of them until 1994.

It wouldn’t be until March of 1949 that VW finally got around to producing a prototype version of the Microbus. Called the Type 29, it showed that the Beetle’s chassis wasn’t strong enough by itself to handle working duties. Instead, a ladder-frame would be required underneath.

Further, the body was wind-tested in a tunnel to try to cut down on drag. This last was a success, with the completed production Type-2s having better aerodynamics than their Beetle cousins. 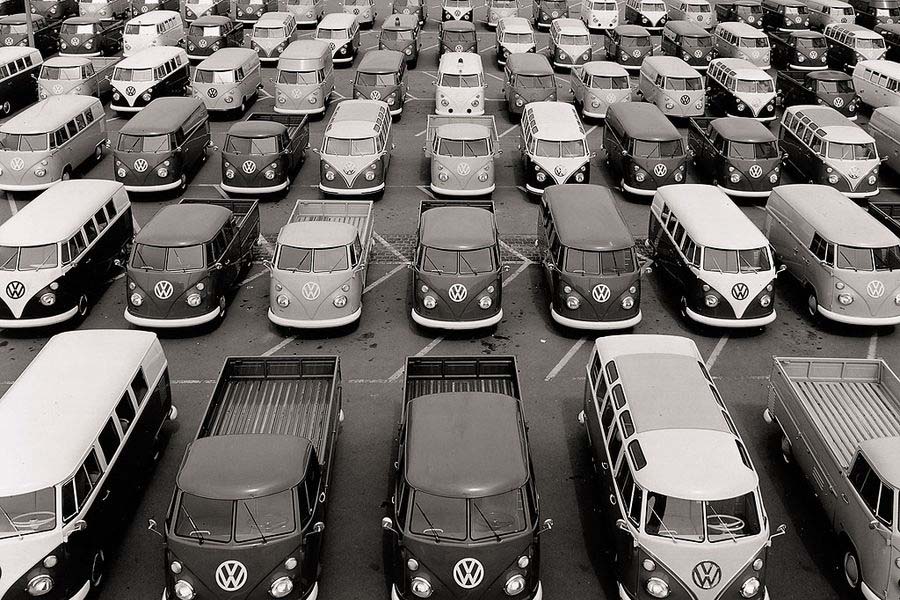 After much redrawing, the production version of the Microbus arrived on November 12, 1949, in the form of eight models shown to the press. There were several variants: a people-mover with fixed seats, a pickup truck that most closely resembled the original Plattenwagen, a dedicated cargo/delivery van, and the Kombi or Kombinationskraftwagen, a multi-purpose people-carrier and cargo van with removable seats.

Production began in March of 1950, and by 1954, some 100,000 VW Type-2s were on the road. Happily, traffic at the time was relatively slow in Europe, as the performance provided by these first machines was positively glacial. Using the same 1,100 cc air-cooled four-cylinder engine as the Beetle, save with lower gearing, the Type-2 had but 24 hp to move itself around. 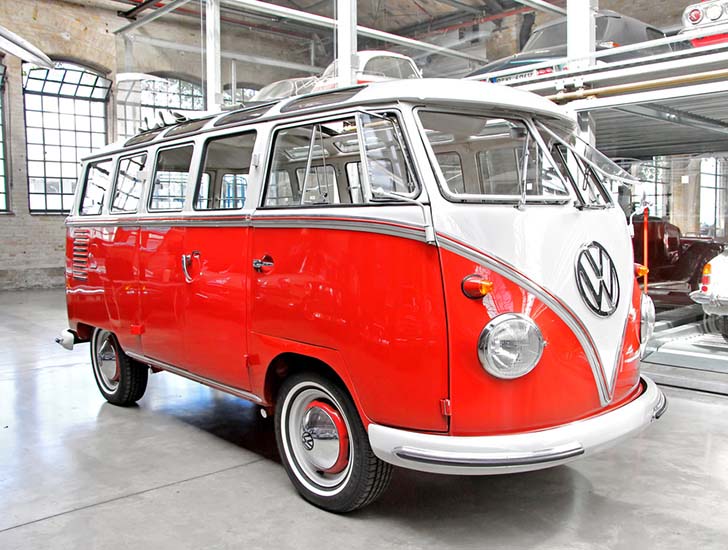 Still, these early versions are the most prized of any Volkswagen, with charismatic styling and unique split windows. The rarest Samba, or 23-window Microbus, can be worth nearly a quarter of a million dollars these days if in excellent condition. 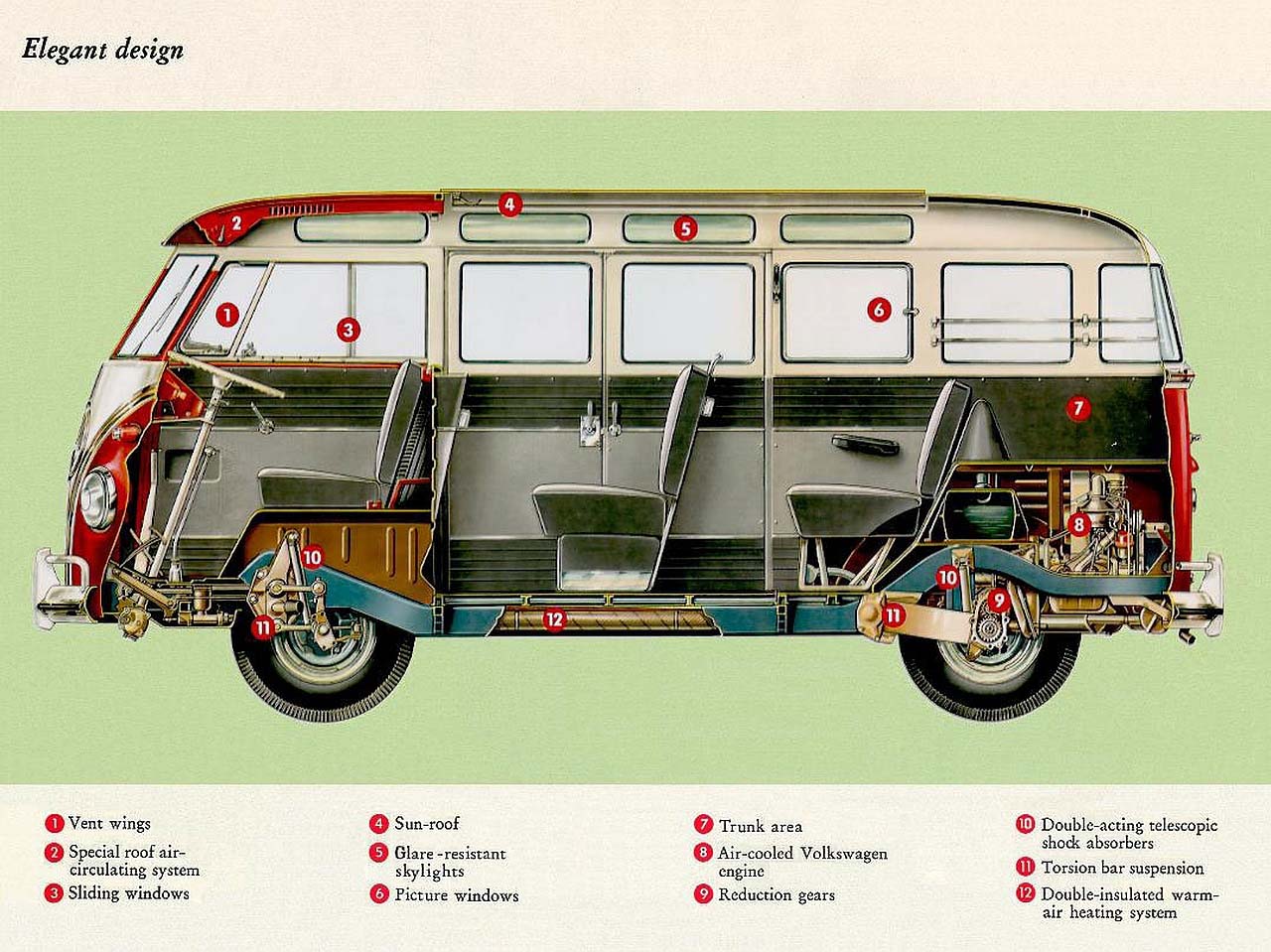 But long before collectors drove prices through the roof, people loved the Type-2 for its simplicity, its durability, and its sensible layout. The side-loading door was a boon for the small businessman, as was the flexibility of the Kombi. The microbus was perfect for taking the entire family on a scenic tour of the countryside, with plenty of time to admire each individual sheep. And as for camping expeditions.... 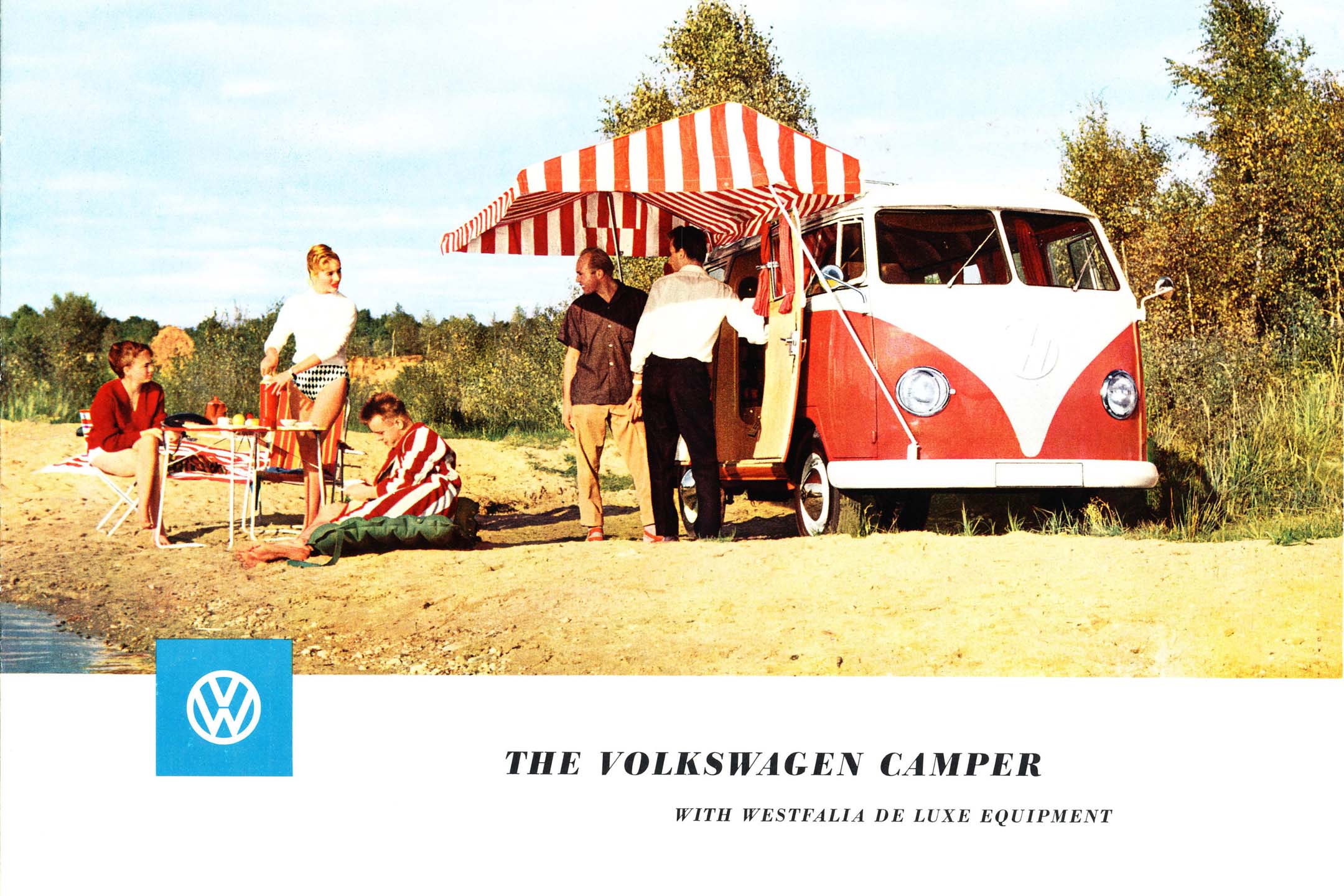 The first Westfalia camper conversion happened in 1951, at the behest of a British officer stationed in Western Germany. The brief was to create a mobile home on wheels, which could be used to live and work as the officer transited around postwar Germany, employed in some sort of surveying or oversight position. 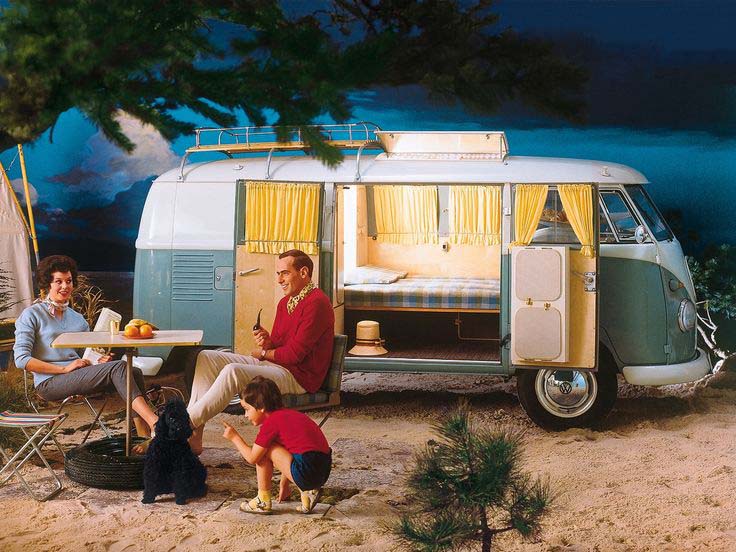 Westfalia, a company that even then had a century-long history of carriage building, took a standard bus, installed a twin door between the B and C pillars, and built in folding furniture and a checker-pattern theme. There was a couch, fold-away table, sideboard, and a roll-front cabin. They even fitted ruffled curtains. 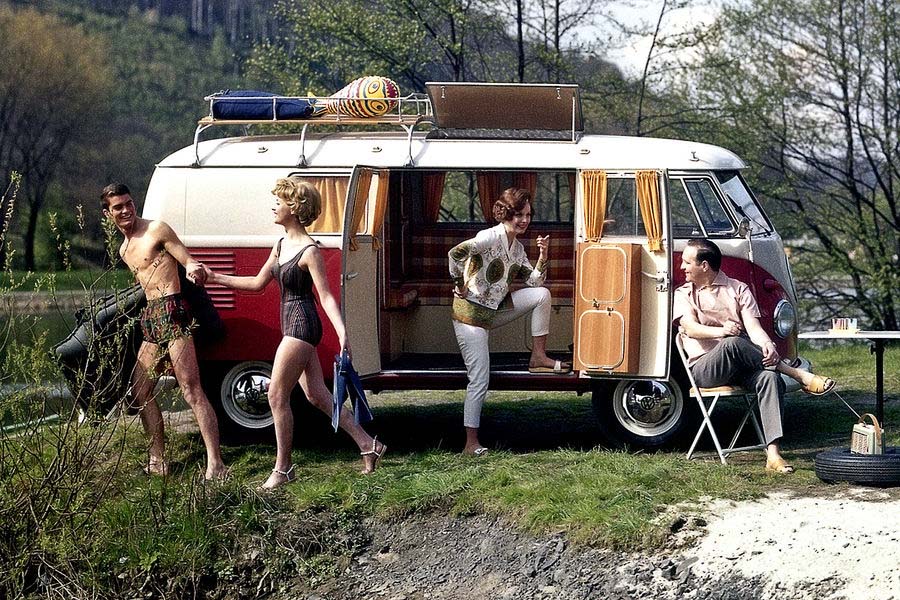 The camperized VW Microbus would become the ultimate expression of freedom for the following age. Anywhere you could drive, you could live, as long as you liked living simply. A visit to any modern RV park will make you wonder if a few people couldn’t stand to pare things back a little.

As a success from the get-go, the VW Microbus would be changed only very slightly over the first few years of its life. Mirroring the Beetle’s development, engine size and thus horsepower output increased incrementally, first to 1,200 cc, then eventually to 1,600 cc.

The second-generation Microbus arrived in 1967, and while it was nowhere near as pretty as its predecessor, it was similarly a hit. Instead of a split window, the more upright T2 got a large bay window, and had something of a melancholy expression. By 1973, you could get both a (slightly) more powerful 1,700 cc engine and an automatic transmission, making the Microbus something anybody could drive. This was the Type 4 engine, which would eventually swell to 2.0L in displacement, gaining fuel-injection and electric ignition along the way.

Of course, by this point, the Microbus had been entirely embraced by the counterculture movement. Bob Dylan put a VW Bus on the cover of his album The Freewheelin’, and Arlo Guthrie’s mentioned a red VW Microbus in his song “Alice’s Restaurant”. And who could forget The Who’s “Magic Bus”? (To be fair, that last one’s not necessarily about a VW.) 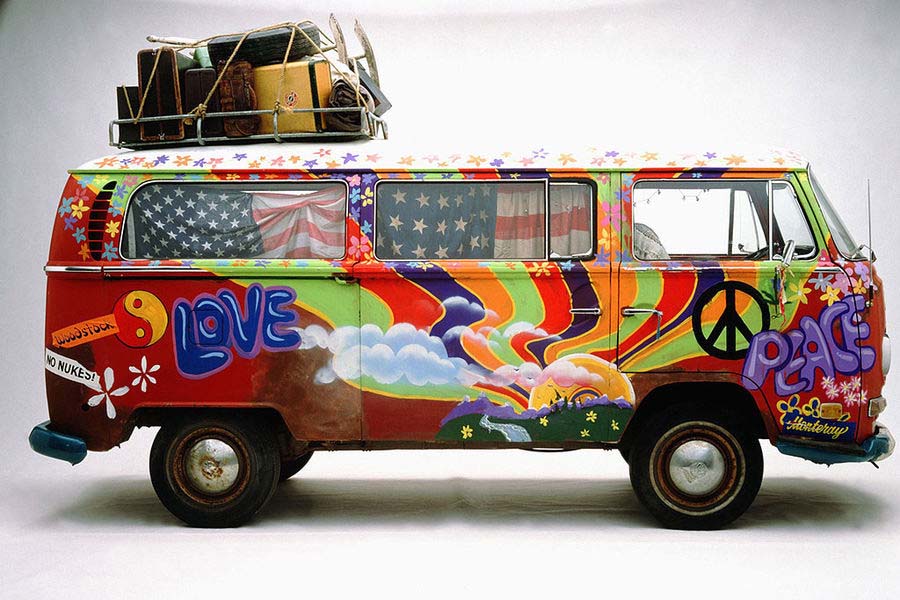 The perfection of the VW Microbus for a nomadic lifestyle lived at a little above walking pace was perfect for those who wanted to drop out of the mainstream, maaaan. As more and more of them started showing up in the used market, they became even more popular, especially as you could repair a ’bus with pretty minimal mechanical knowledge. It’s almost a certainty that somebody tried to fix one of these things by rearranging its chakra using crystals – and it probably worked.

But as the conspicuous consumption of the 1980s loomed, the Microbus was about to evolve to something bigger and boxier. The third-generation Type-2 VW showed up in 1979, and almost immediately exchanged low-powered air-cooled durability for still-low-powered water-cooled quirkiness. Known as the Vanagon by North American enthusiasts, these are still immensely popular, and Westfalia versions in good condition fetch big money.

As the last of the rear-engine vans with a somewhat laissez-faire attitude towards crumple zones, the Vanagon makes the most out of its relatively small footprint. Like the original Microbus, it’s very slow, but as the fleet continues to age, owners are managing to come up with solutions.

If you’re a VW fan with deep pockets, there’s almost an unlimited amount of money to be spent on a Vanagon. For those who like to get out in the wilderness, finding a rare all-wheel-drive Synchro model and fitting a durable and powerful Subaru 2.5L engine makes for a sort of hunting lodge on wheels. While classic early T2s fetch big money from collectors, later Westfalia and Vanagon enthusiasts will spend more than $100,000 creating their own perfect live-anywhere machine. 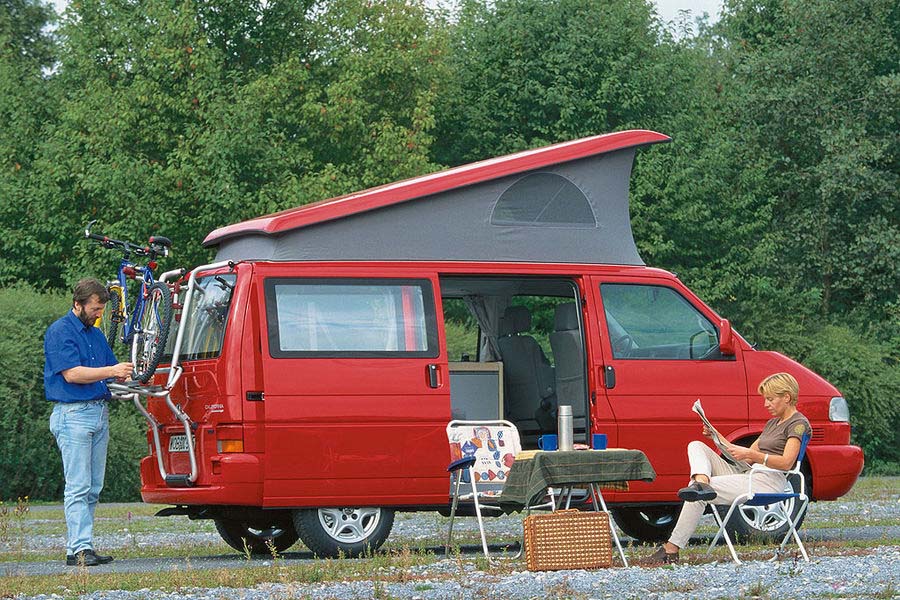 Replacing the beloved Vanagon happened in 1992, and it wasn’t easy. The next-generation van was a sharp departure, fitted with a conventional front-mounted engine and front-wheel drive. Camper conversions were still popular, and the VR6 version remains a desirable model, but the high price of the fourth-gen van made it rare.

Add in the high cost of maintaining a Volkswagen from the 1990s, and a Eurovan is now a pretty rare sight on our roads. The first-generation Microbus is also a considerable rarity outside summer months, where it’s more likely to be seen at a car show than at a campsite. The same thing is happening to the bay-window second-generation VW vans; currently, only the Vanagon really carries the beacon of adventure for the Volkswagen Microbus.

That’s mostly because after the Eurovan, VW stopped bringing over its vans. Any visitor to Europe will wonder why we can’t get the current sixth-generation Microbus, which comes with many of the same engines you can get in a contemporary Golf. Yes, putting them in showrooms would likely be an expensive proposition, but Microbus fans seem to be willing to pay through the nose for the fun they’ve been missing. 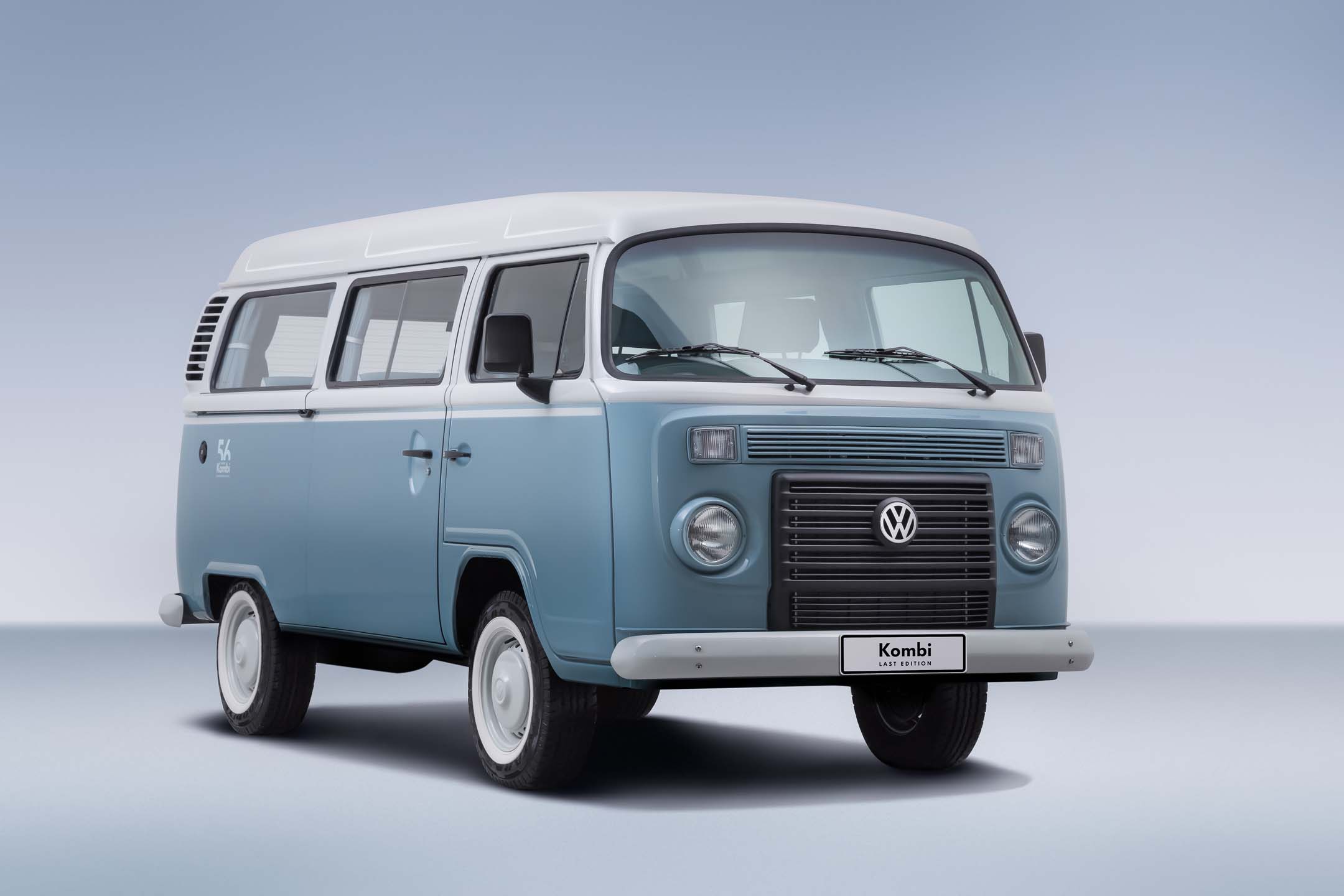 In the meantime, the last true Microbus was probably the Brazilian-made Kombi, which soldiered along all the way through until recently. Fitted with a water-cooled 1.4L engine capable of running on either gasoline or ethanol, the last of the Type-2s left the factory in 2013 with 600 “Last Edition” models. 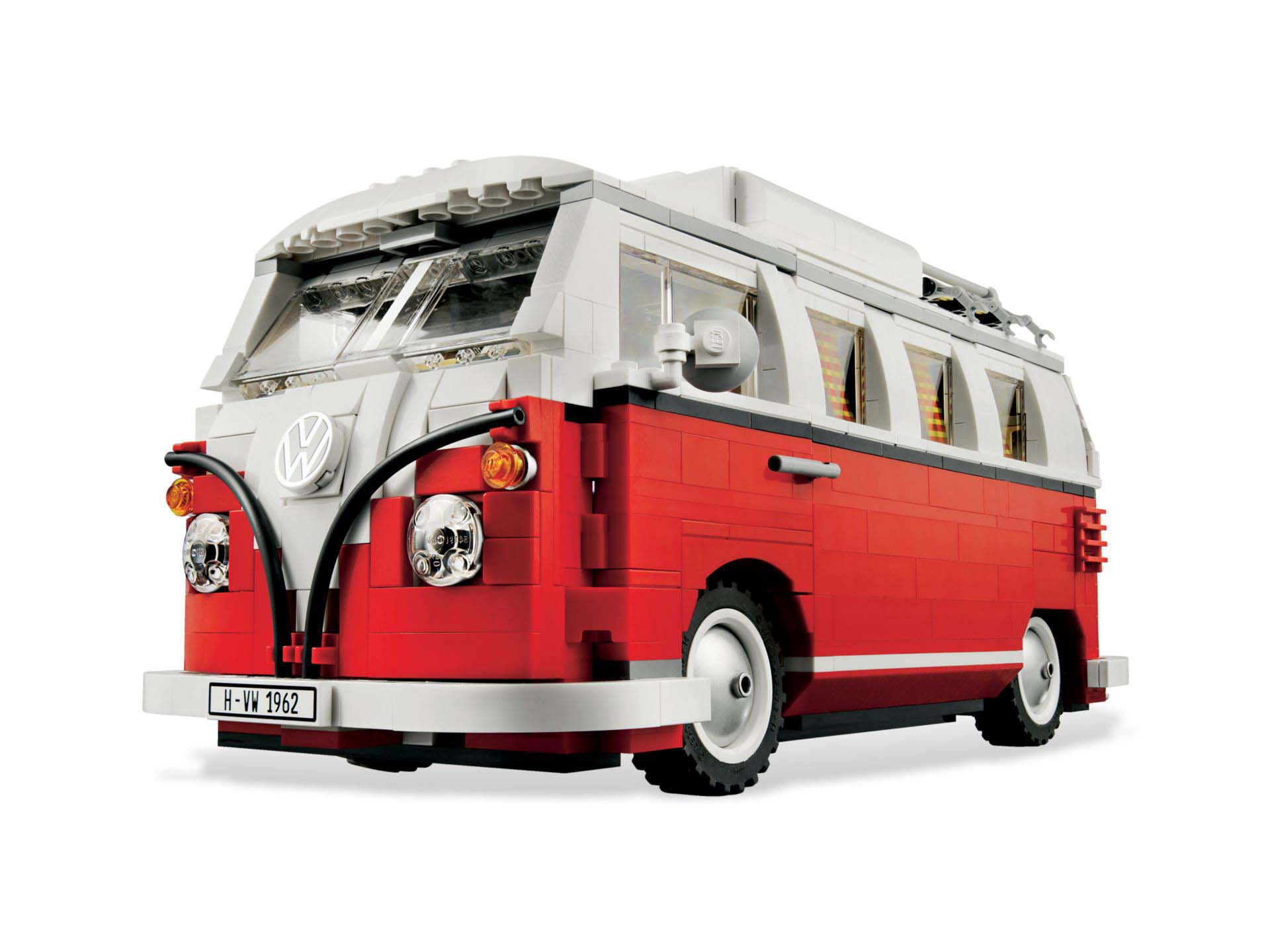 Until a new version hits our shores – electric or not – the only way to get yourself a brand-new VW Microbus is to hit up Lego, who make a scale-sized version. Just as with the original, everything is straightforward, durable, and cleverly packaged. It looks like something a kid would come up with – but then again, sometime simplicity of design is best.