How Much Does it Really Cost to Charge that Electric Vehicle?

Just about every article or news piece about an electric car that we do - and there is a lot of EV news lately - gets a comment thread filled with people debating the price of charging an EV. "Hydro rates are so high", "maybe when electricity is cheaper", "who can afford to drive one when I can use cheaper gas", and best of all "filling a tank with fuel is half the price of plugging in a car."

The first step is finding the cost of electricity. In most provinces, that's easy. Most provinces have a set rate, and then tax. In New Brunswick, for example, power costs $0.1059/kWh, and then gets a 15 percent tax. In provinces with a flat service fee, we have ignored that cost. You have to pay that anyway, EV or not, so we didn't count it. One province, however, is a little more tricky.

Ontario has not just three time of day rates, but a patchwork of electric providers. Each has a different fee to get the power to your door, with some having multiple rates depending on where you live. That makes it difficult to calculate for every person in the province, but we can do some general cases. A best case in the province, and a worst case. For the worst case, we used rural delivery fees and peak time rates. For the best case, we used night time rates with an urban delivery fee rate.

Ontario has just announced a total 25 per cent  reduction in electricity prices to come by summer 2017, after lowering them by a full eight per cent already on January 1 2017 by eliminating the provincial portion of HST on electricity bills. Since details of those reductions haven't been published yet, we've incorporated those eight per cent savings new EV owners will see now, but keep in mind all these Ontario costs could be a further 17 per cent lower by this summer (or at least the delivery charge will be 17 per cent lower), once the Ontario Fair Hydro program starts this summer.

The next step is finding out how much electricity a car takes to charge up. Natural Resources Canada, the same agency that handles fuel economy ratings, does consumption ratings for electric cars. Part of their rating is a kWh/100 km rating for all electric cars. We'll use their city/highway combined rating as the amount of electricity used to drive 100 km.

For our calculations, we're using two electric vehicles. The 2017 Chevrolet Bolt EV and the Tesla Model X P90D. An average BEV hatchback, and a luxury all-electric SUV. For gasoline equivalents, we have chosen the 2017 Honda Civic sedan to put next to the Bolt. It's the best-selling car in Canada, and the two have surprisingly similar interior dimensions. A competitor to the Model X was a little more difficult. It's the only fully electric SUV, but it's also a luxury one. So putting it next to the best-selling mid-size SUV, the 2017 Hyundai Santa Fe Sport, didn't seem right. The Model X is closer in size, performance and price to a higher trim Range Rover SUV, so we've used a 2017 Range Rover Supercharged. 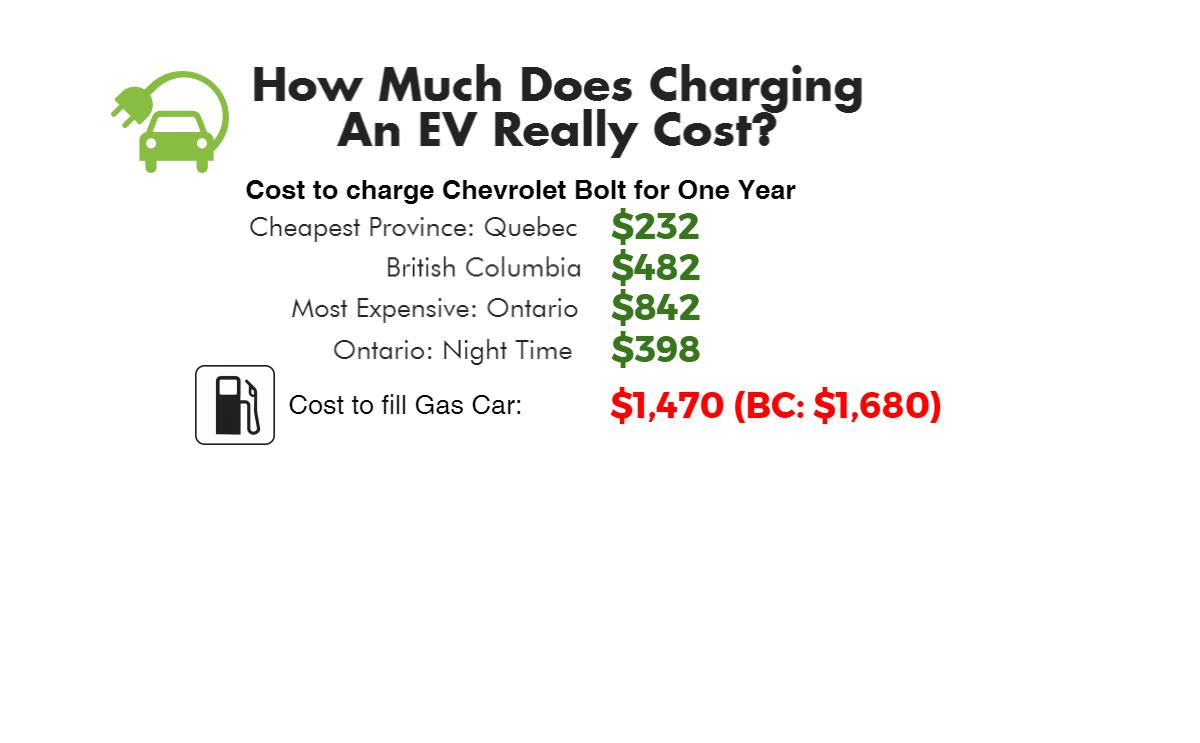 The Honda Civic is rated to get 7.0 L/100 km in combined driving. The average price of regular in Canada is $1.05/L. That's easy enough to figure out. One hundred km of driving in the gas car will cost roughly $7.35, assuming the Civic achieves its official mileage figure (rare for any gas car, but let's assume so throughout for comparison purposes). British Columbians and Newfoundlanders, your gas is significantly more expensive than the rest of the country, so your costs would be $8.40 and $9.24 per 100 km, respectively.

In Quebec, that's 5.71 ¢/kWh plus tax. It will run the meter to a total of $1.16. One dollar, sixteen cents to drive 100 km. But Quebec does have the cheapest rates in the country, so let’s look at the worst case, in rural Ontario. The highest main grid electric cost in the country is in rural areas of Ontario at peak time. Power then and there costs 18 ¢/kWh. On top of that, there's a distribution fee of 4.8 ¢/kWh. Again, that's on top of the large fixed charges, but since you aren't unplugging your fridge anytime soon we won't count those. So in rural Ontario, the most expensive part of the country for electricity, 100 km in a Bolt will cost $4.21. A little over half that of an efficient gas car.

But wait, charge that car at night or any time on off-peak weekends, as most EV owners do, and the Ontario cost drops to just $2.36. If you aren't in a rural area, the cost is just $1.99.

So best case, an EV costs 20 percent as much to fill as a Civic, worst case is a bit over half. 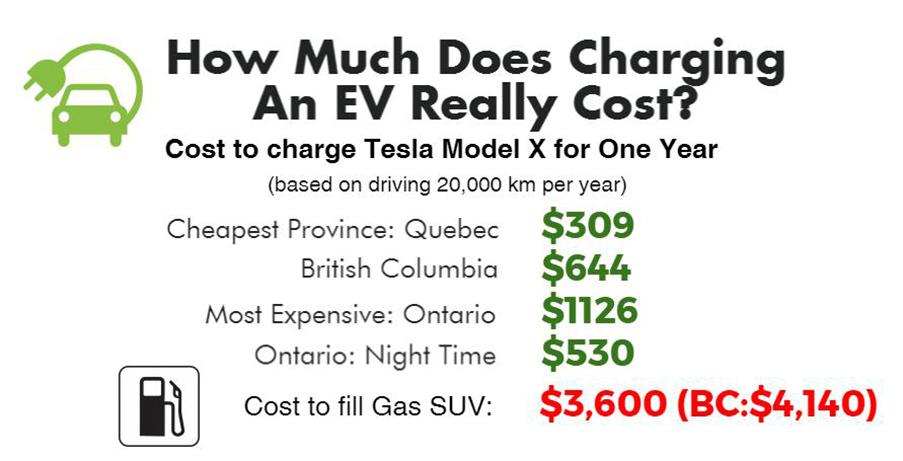 So now we know how much electric cars should cost to charge. Most EV's come within a few cents of the cost of the Bolt as well because they're all shockingly (zing!) efficient. The spread between best and worst is about 4 kWh. But they have some other tricks up their cords.

For a start, there are thousands of chargers spread around the country. It takes some effort to find somewhere rural enough that there isn't one nearby. Most of those chargers are free. So with some planning, patience and luck, you could reduce the yearly fuelling bill to zero. Zip, zilch, nada.

Ontario, the province where charging has the potential to cost the most, is not just building more chargers but is implementing plans to let homeowners charge free at home overnight as well. No details yet from the province on how exactly that plan is to be implemented either, or when, but it will likely bring more cost reductions for EV owners and potential owners in the province. 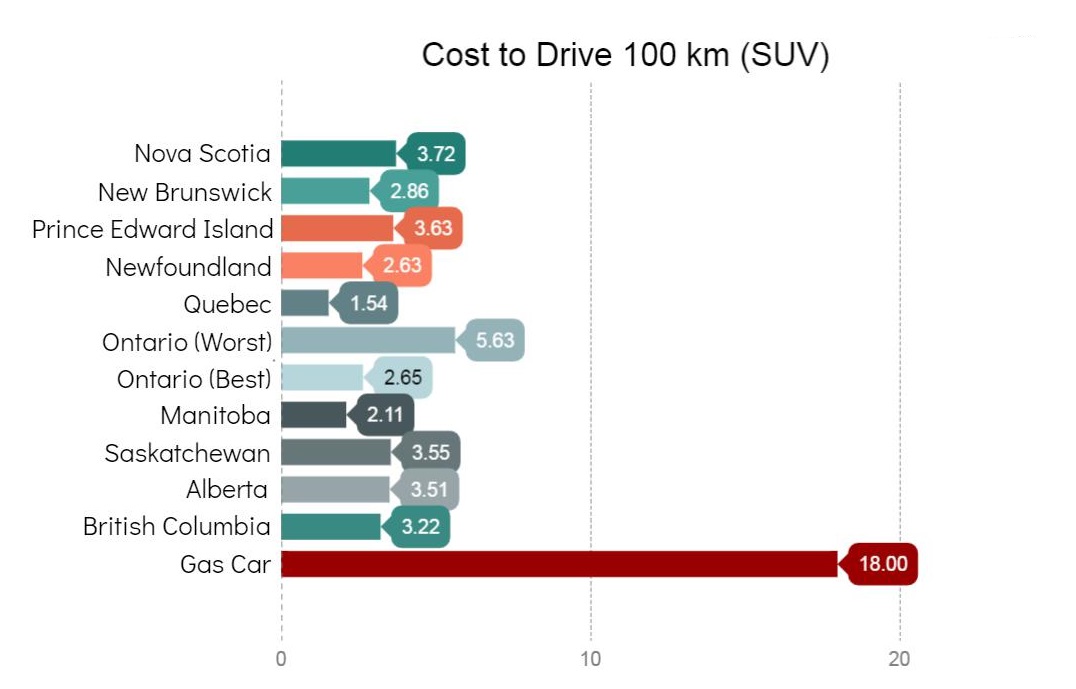 How do plug-in hybrids compare? We'll take a look at how much it will cost to travel the first 100 km after a full charge in a compact hatch, the 2017 Prius Prime; a midsize sedan, the 2017 Ford Fusion Energi; and a luxury SUV, the 2017 Porsche Cayenne S E-Hybrid. Those are all plug-ins that can be bought as a non-plug in model. The Prius Prime can drive roughly 40 km on a full charge (these figures too are usually best-case scenarios, like the fuel consumption), using the Prius Prime's 6.3 kWh battery. The next 60 km are on gasoline, where it should use 2.6 L of regular. A Fusion can do 35 km on a full charge, using 7.5 kWh. It should use 3.6 L of gas to complete the trip. Finally, the Cayenne can travel 23 km on 10.2 kWh. The rest of the trip should use 8.2 L of premium.  A regular Prius would need 4.5 L of gas, a 1.5L engine Fusion would need 8.7 L, and a Cayenne S would need 12 L of premium.

So a 100 km trip in any of these plug-in hybrids would still cost more than a fully electric car, but a look at our chart shows the overall fuelling costs are definitely less than their conventional gas versions.

So we’ve figured out how much an EV will cost to charge. It’s little surprise that it’s going to be less than a gas car, but the savings of up to $1,238 per year for a car or $3,291 for an SUV when driven the average 20,000 km is a bit more of a shock. Current incentives on electric vehicles in Ontario bring the price of a Bolt EV down to $28,795 in that province. That makes it only $3,111 more than our Civic LX with a CVT. By that math, it’s now possible for an EV to pay for itself in under four years. The best part: you'll never have to stand beside a pump at -30°C ever again. You can even program the car to warm up while it's still on the charger. That’s something to think about the next time you’re shopping for a new car.