The Easter Jeep Safari is an off-roading event that has been held in Moab, UT, every year for the last 51 years. It's nine days, dozens of trails, and nearly 2,000 vehicles. Most of which are Jeeps. While Jeep doesn't organize the event, for the last 15 years they have been bringing some very interesting concepts to show off to their most loyal fans. Years past have brought crazy design, absurd engines, and incredible off-road potential, last year showing off the Trailcat and its 707 hp Hellcat V8. This year Jeep has brought seven all-new concepts to show off, ranging from just an accessory catalogue away to concept-only dream car. 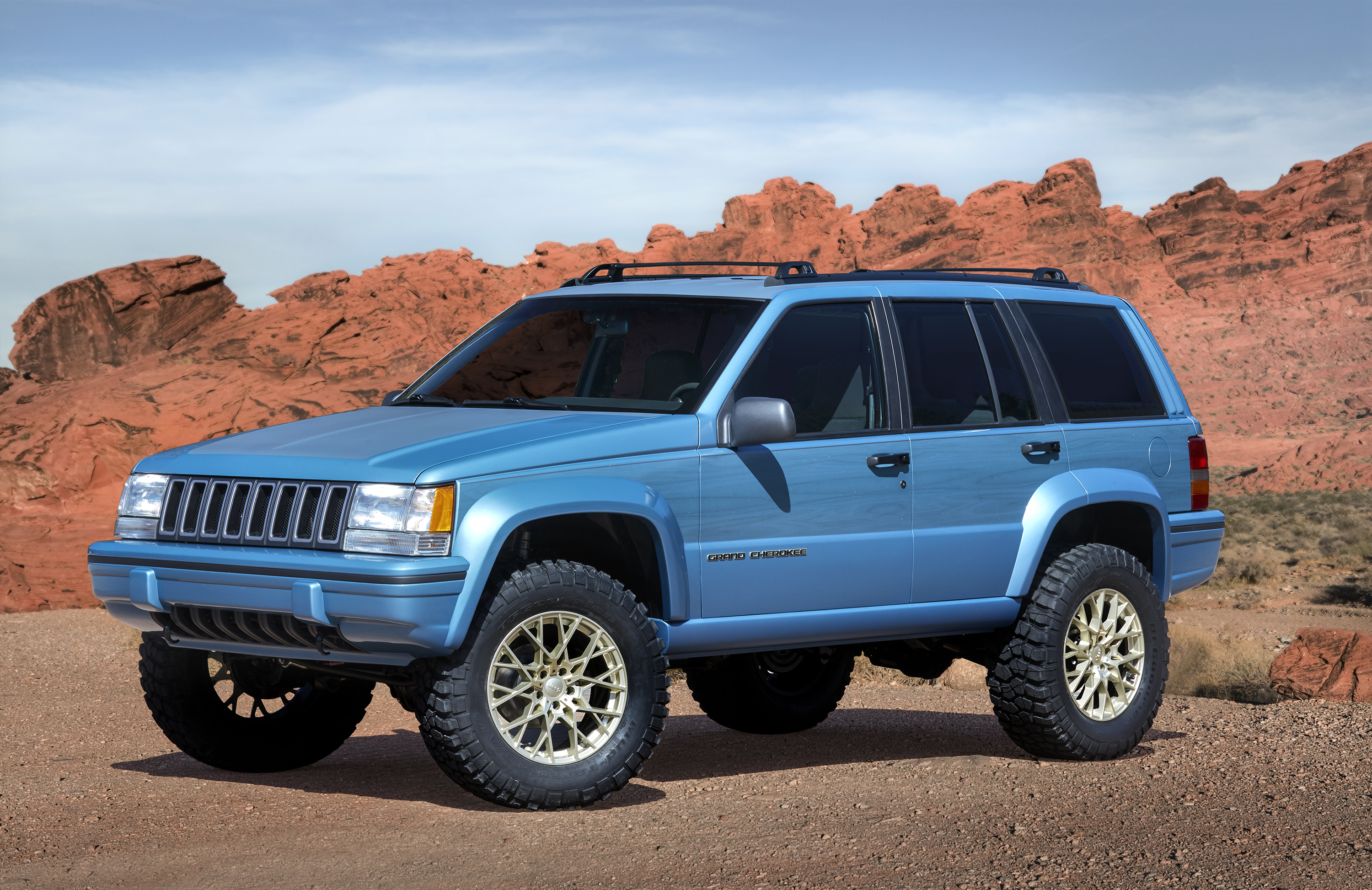 The first one is the Jeep Grand One. It's a modern look at a 1993 Jeep Grand Cherokee, celebrating the 25th anniversary of that truck. It has 18-inch wheels, inspired by the smaller lace-style wheels that came on the original. The light blue paint has a subtle wood grain in the paint on the sides, again as a callback to the original. It sits on 33-inch tires, with flared fenders and trimmed fascias to suit. The inside looks brand-new 1993 fresh with a cassette sticking out of the dash and a vintage car phone. The plaid headliner is a nice finishing touch. 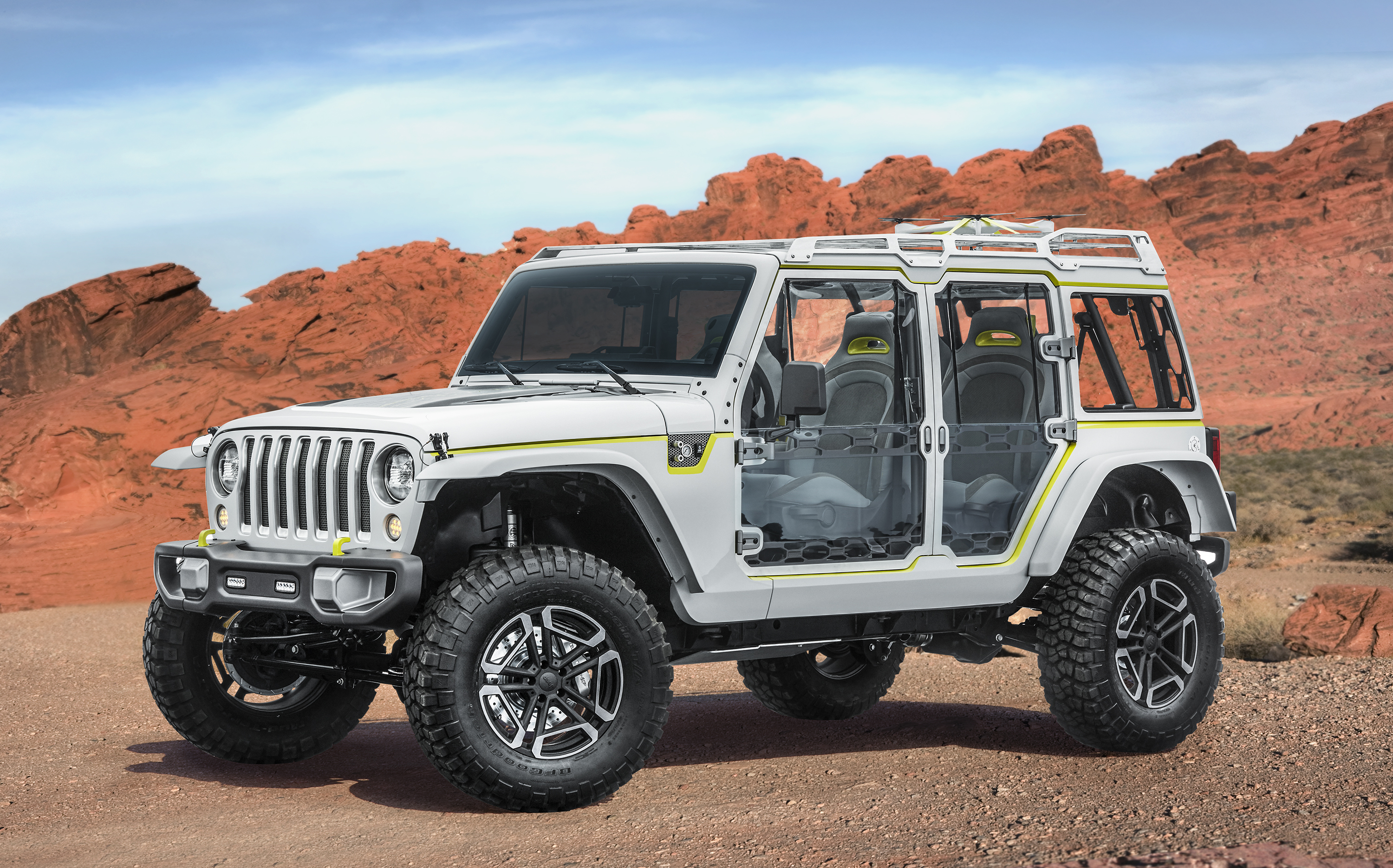 The Jeep Safari is a Wrangler-based concept with a translucent roof, an aluminum cargo rack with a built-in drone, a more raked windshield, and trimmed rockers. The clear doors have aluminium and clear vinyl pieces, and zipper openings to let in more air. The rear bucket seats are turned slightly outward to make it easier for passengers to see out. It has a 2-inch lift and Dana 44 axles with lockable differentials. It's also been shortened compared with a stock Wrangler Unlimited to make it more nimble on trail. 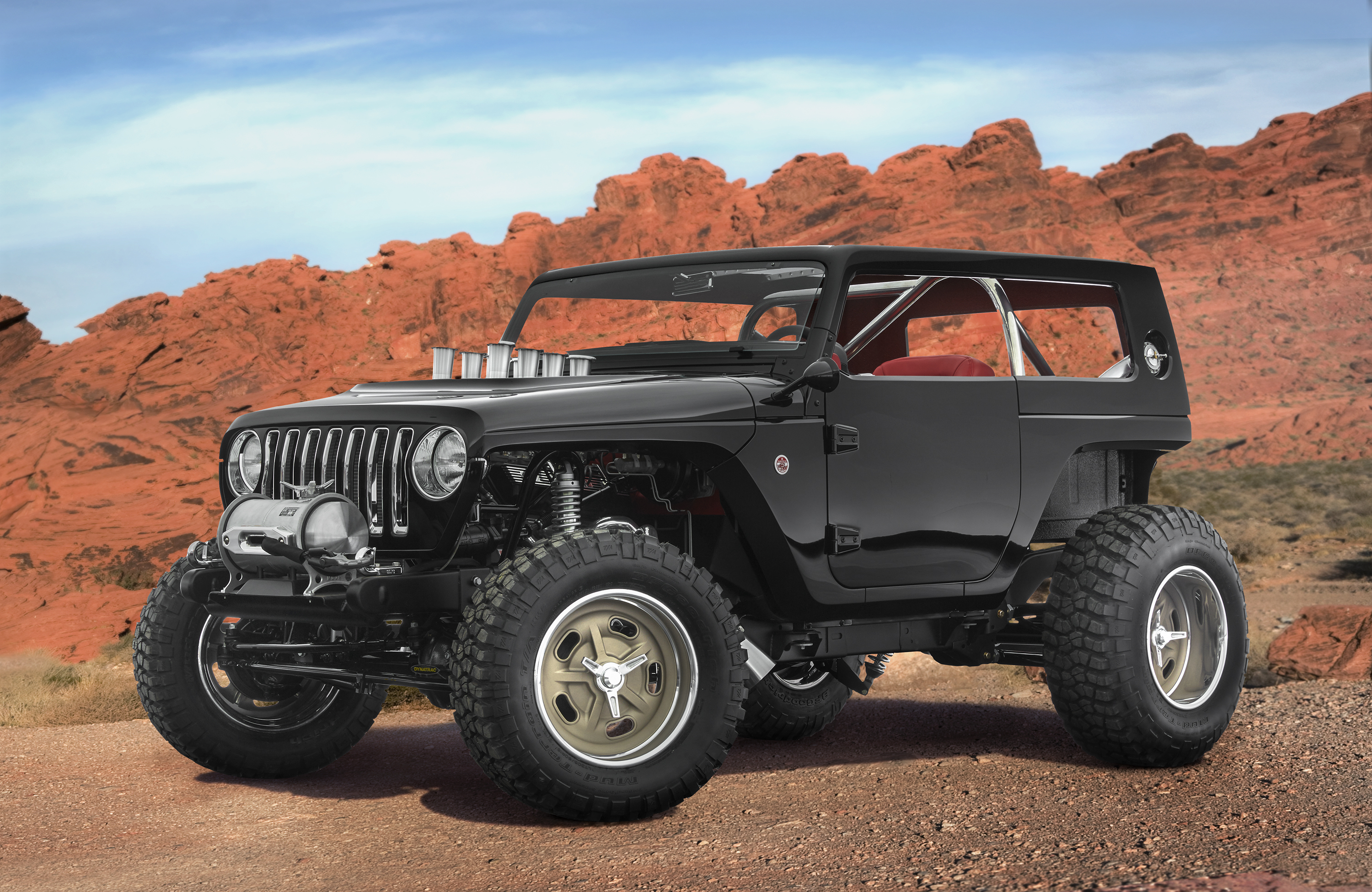 The Jeep Quicksand puts a 392 (6.4L) Hemi V8 with stack-style fuel injection in a Wrangler frame. Jeep calls it a "loud, fast, and fun hot rod", and it looks the part of the '50s gasser style. The downturned exhaust, front-bumper Moon tank, and chopped roof go along with that look, as do the knockoff style wheels with 32-inch front and 37-inch rear tires. It gets a longer wheelbase than a standard Wrangler, but the body has been trimmed front and rear.

Inside are low-back bucket seats, flat aluminium door panels, and a chrome roll bar. In place of the gasser parachute on the rear, there is a recovery rope. 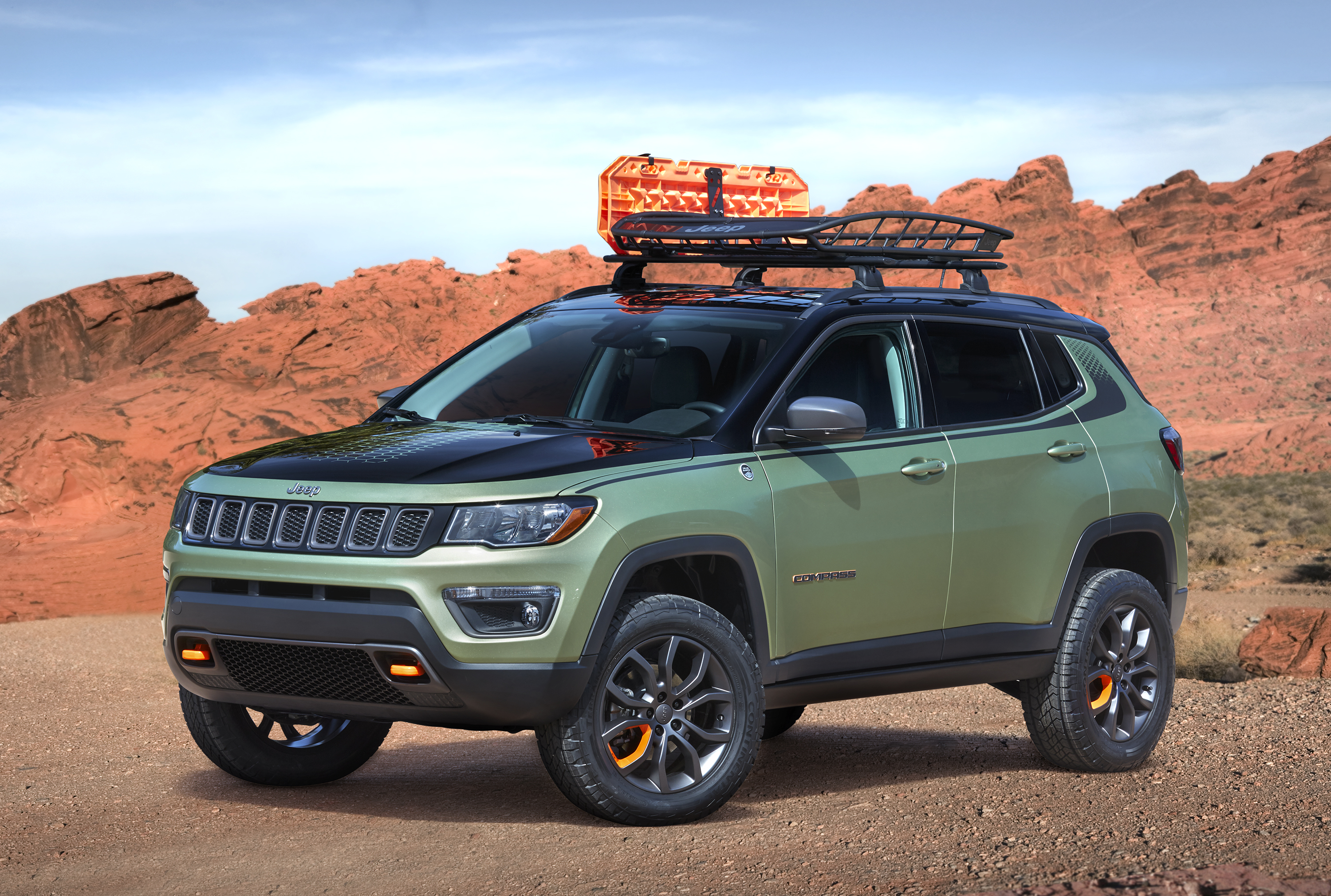 The Jeep Trailpass concept takes the 2017 Jeep Compass Trailhawk a step further off the beaten path. It has a 1.5-inch lift and 18-inch wheels to improve off-road performance. The roof basket, cross rails, and rock rails are all from the Jeep accessory catalogue.

Inside are custom Katzkin leather seats, with body coloured accents. The Trailpass uses the Compass' 2.4L engine and nine-speed automatic. 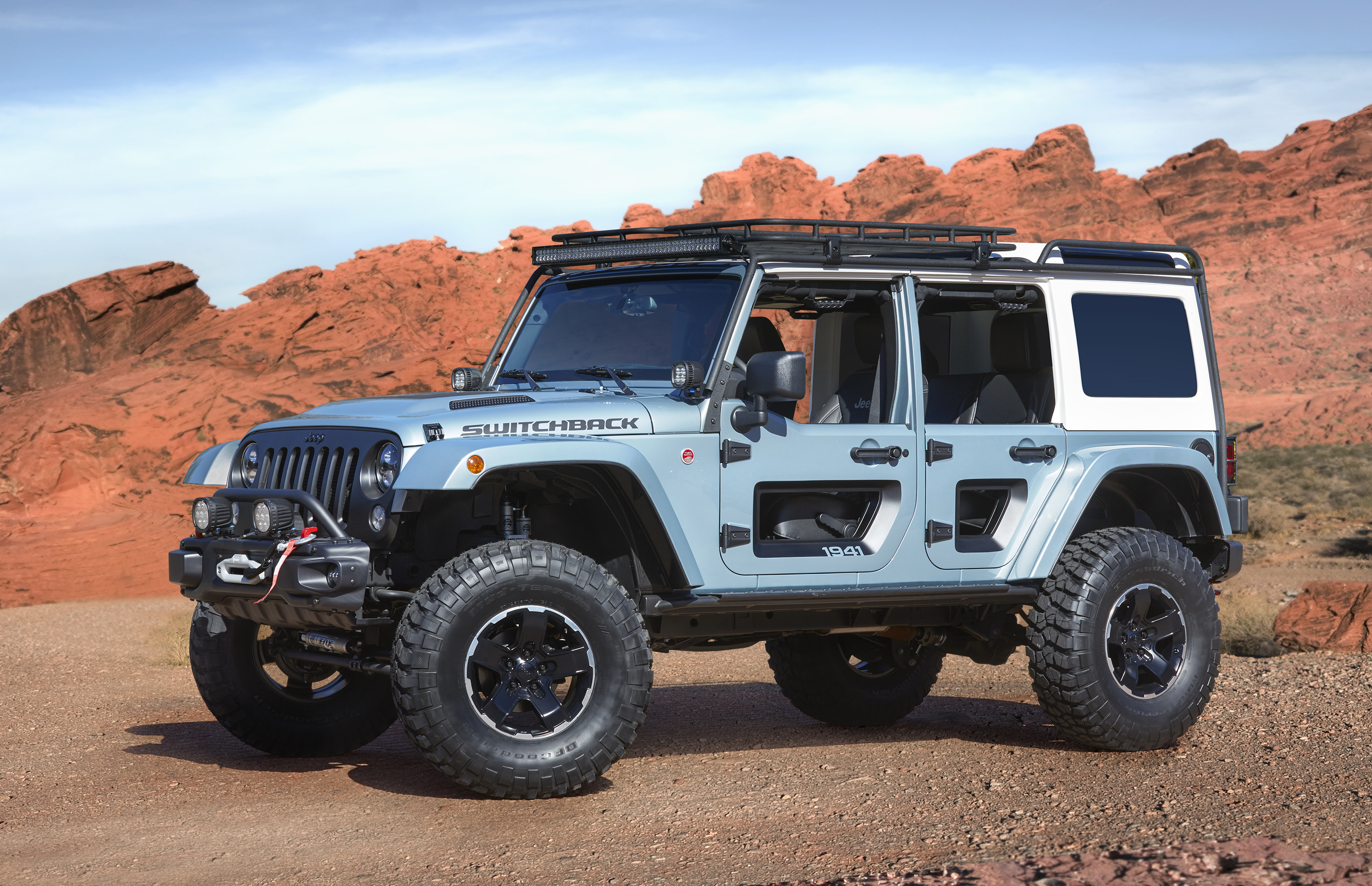 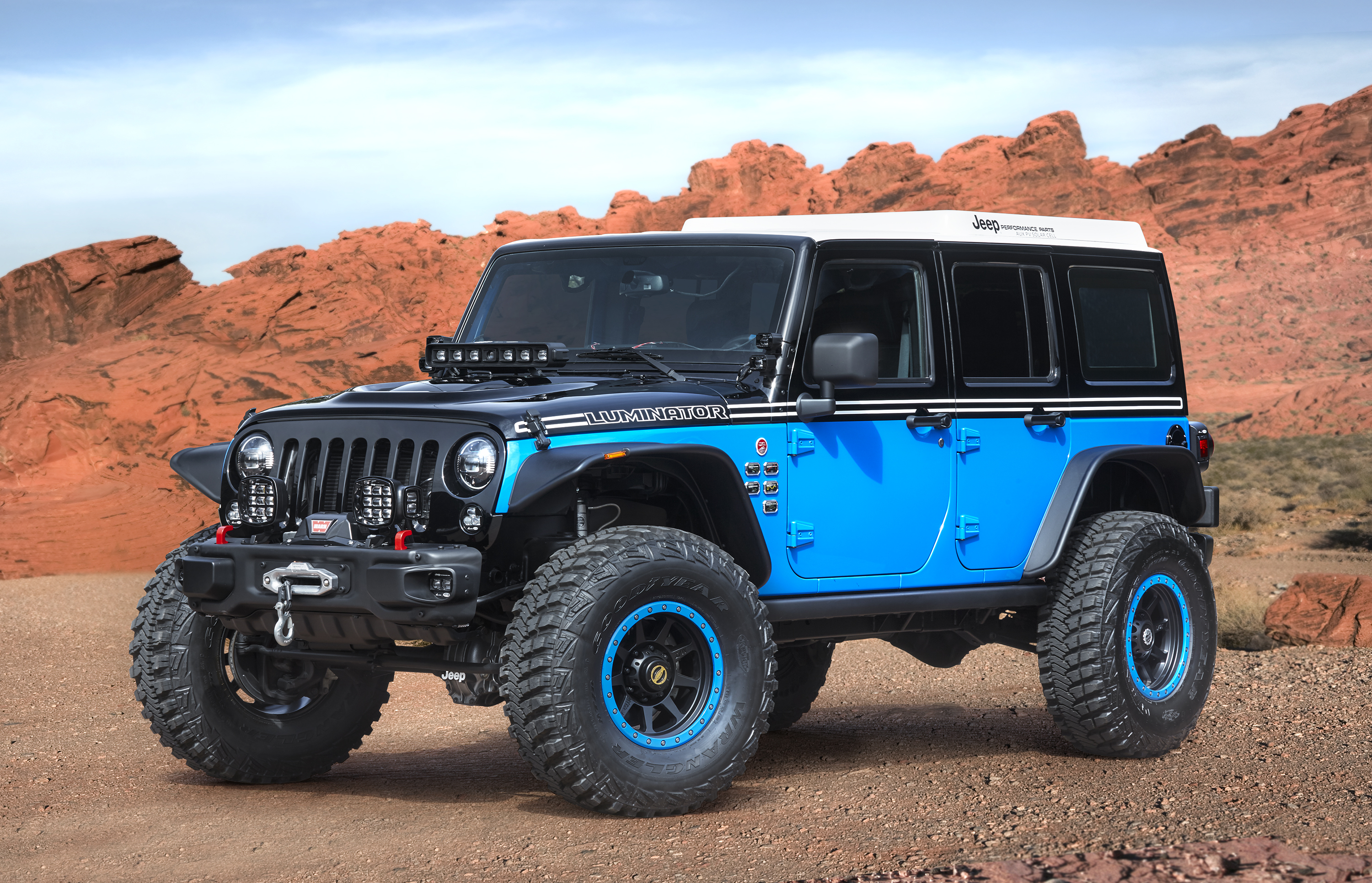 Jeep's Luminator concept gets lights. Lots and lots of lights. There are magnetic underbody lights, 7.0-inch LED headlights, LED tail lights, A-pillar mounted spot lights, upper bumper LED lights with adaptive cornering lights, an LED light bar on the hood, and LED spotlights integrated into the roof. If that's not enough, the hood bar can actually scan for and illuminate obstacles and wildlife on the trail. The rear has a four-colour light to help guide others on trail rides. 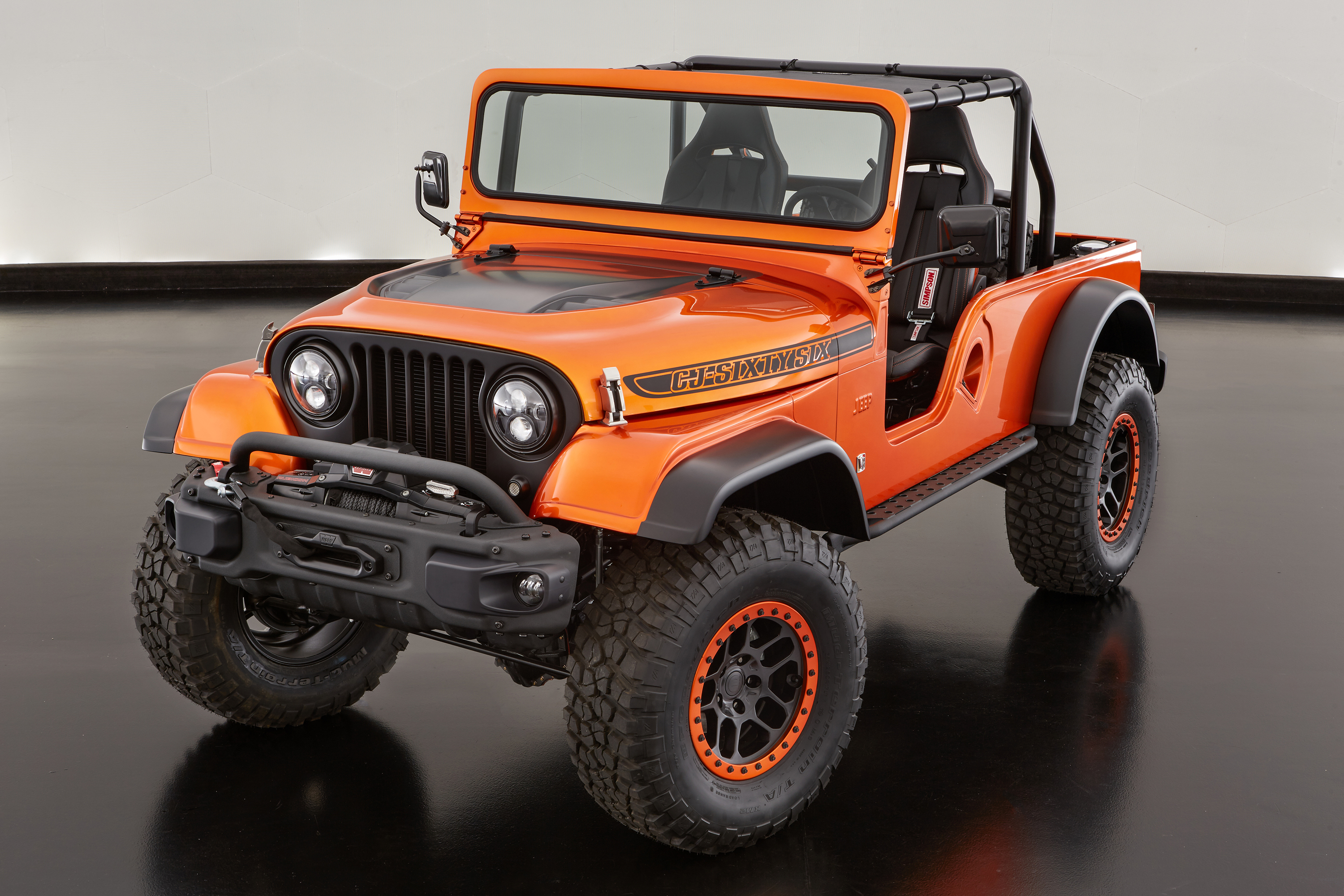 Finally, the CJ66 concept actually debuted at SEMA last year, but is still a cool concept. It has a 1966 Wrangler CJ Tuxedo Park body on a 1997-2006 Jeep TJ frame. Under the hood is a 5.7L crate engine Hemi V8. It makes 383 hp from that engine and uses a six-speed manual. The body has a 2.0-inch lift and Jeep Performance 17-inch wheels. It has a concept air system that lets the driver air up or down for the terrain.

Behind the chopped windshield the CJ66 has Viper seats with a custom roll cage and a bikini-style top.