I have no idea what “casualcore” is. Toyota explains it as some sort of lifestyle whereby you live in the city, but tend to get bitten by the “outdoor” bug and just have to take to the mountains with your hemp Arcteryx jacket and Blundstone boots to see just what it is all your outdoorsy friends are on about. Or something.

Either way, it prompted the brand to come out with the FT-4X concept and – somewhat confounding nomenclature notwithstanding – it’s one cool little truck.

Yes, in size it’s more “compact crossover,” but the company already has one of those in the recently-revealed Toyota C-HR and they’re quick to differentiate the two.

“The C-HR is more of a car,” said Kevin Hunter, President of Toyota’s Calty (“California Toyota”) design and research studio. “This is more of an SUV.” 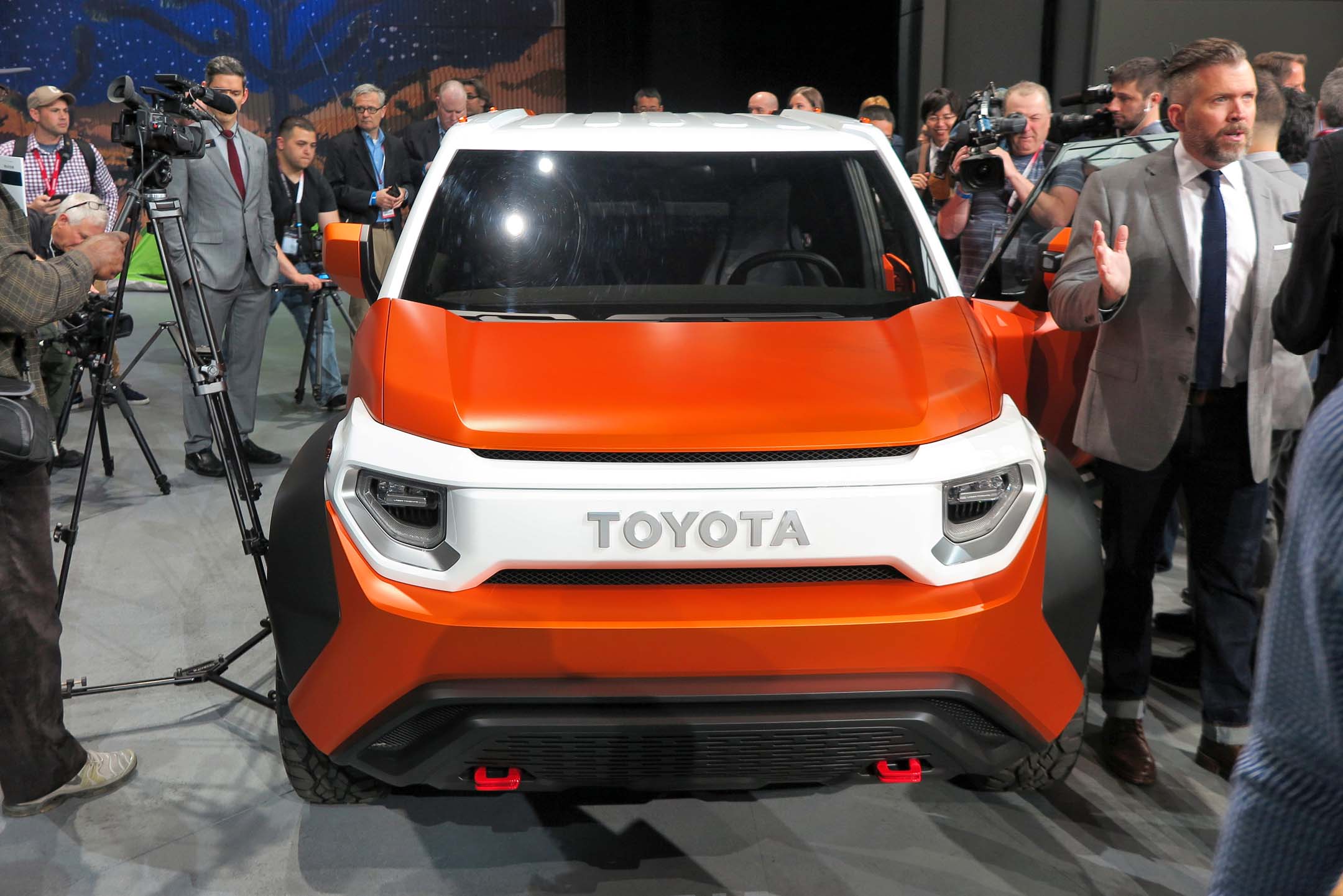 A closer examination of the FT-4X will show you what he’s on about; you do have to allow for decades of design modernization, but there are distinct tones of the classic FJ Land Cruisers of old here. The all-white front fascia emblazoned with big “Toyota” script, for example. Or the somewhat upright windscreen and rear hatch, as well as the front corner turn signals and squared fenders. The knobby Goodyear tires were made specifically for the concept and they’re not street legal, but my, they look good wrapped around three-tone 18-inch wheels. 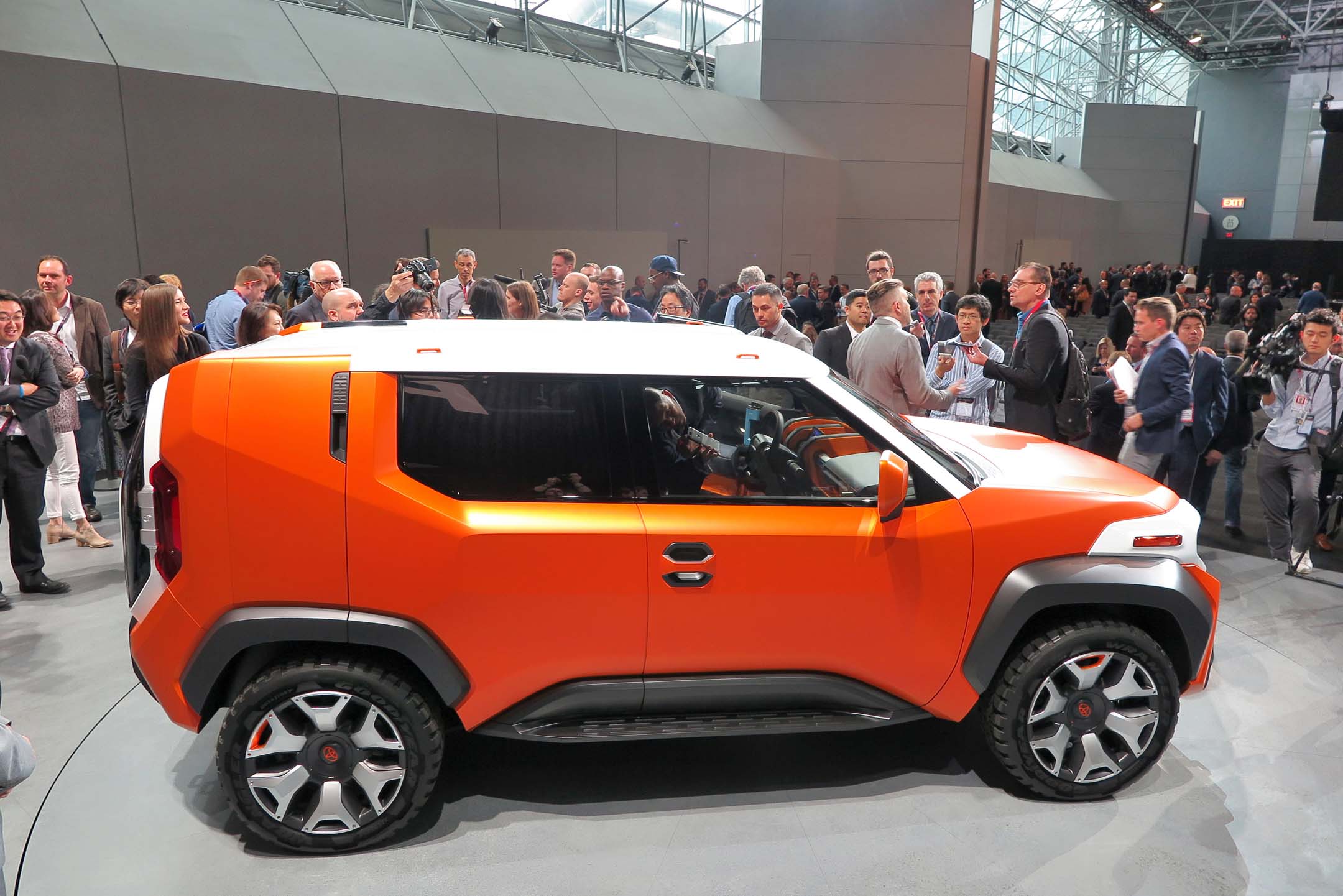 The way the rear hatch opens barn-door style (but also upwards, if you so choose) is another nice allusion to Land Cruisers of old. 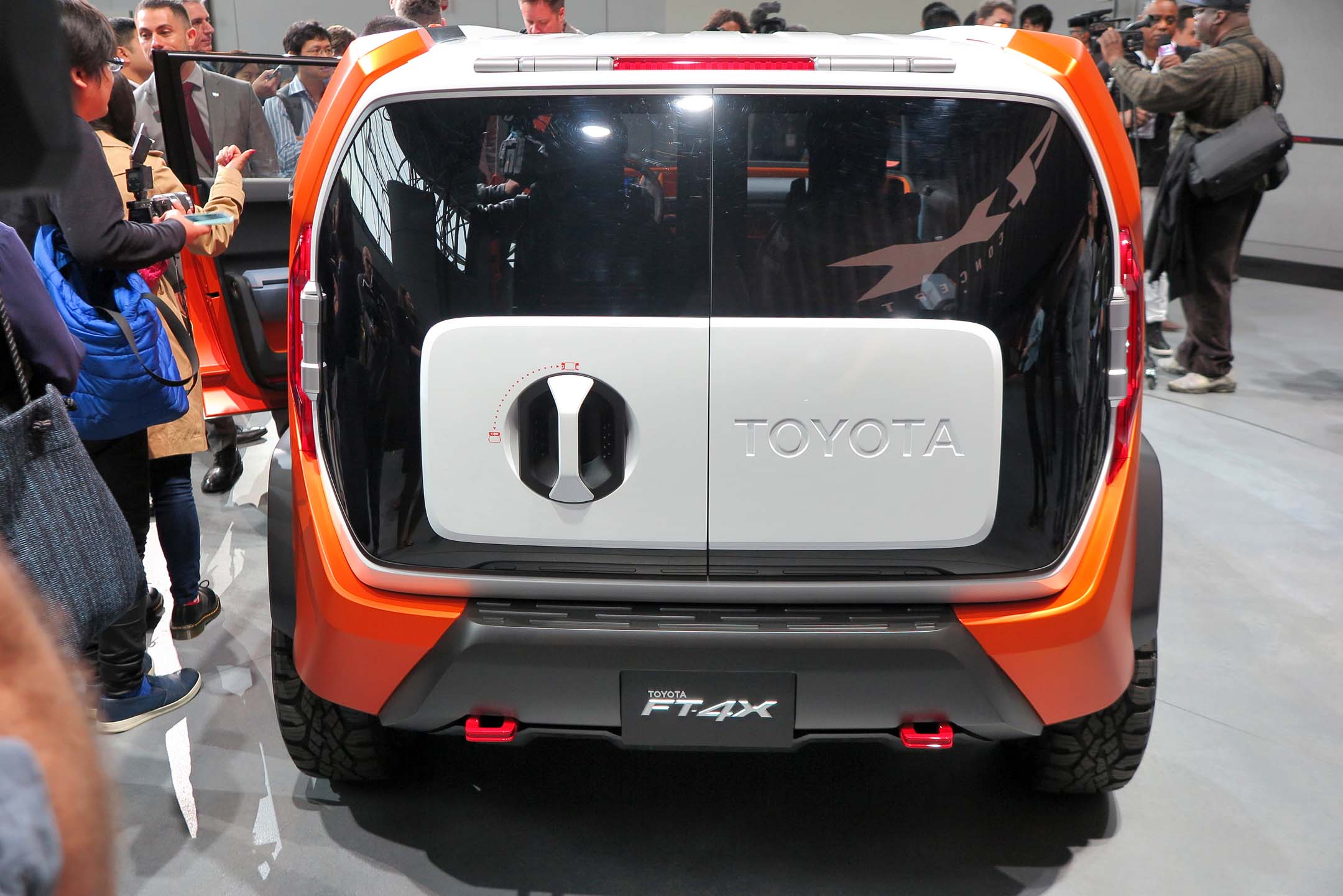 Inside, however, all that stops and you’ll find a very millennial-friendly space (according to Toyota, anyway). Bright orange trim accents, durable seat fabric and Citroen-like single-spoke steering wheel are present, lending a futuristic air to the proceedings. Look more closely and you’ll see that those strange oblong blue-coloured objects mounted to the doors are actually water bottles that can be removed, doubling as door pulls. They eliminate the need, Toyota says, for traditional cupholders. 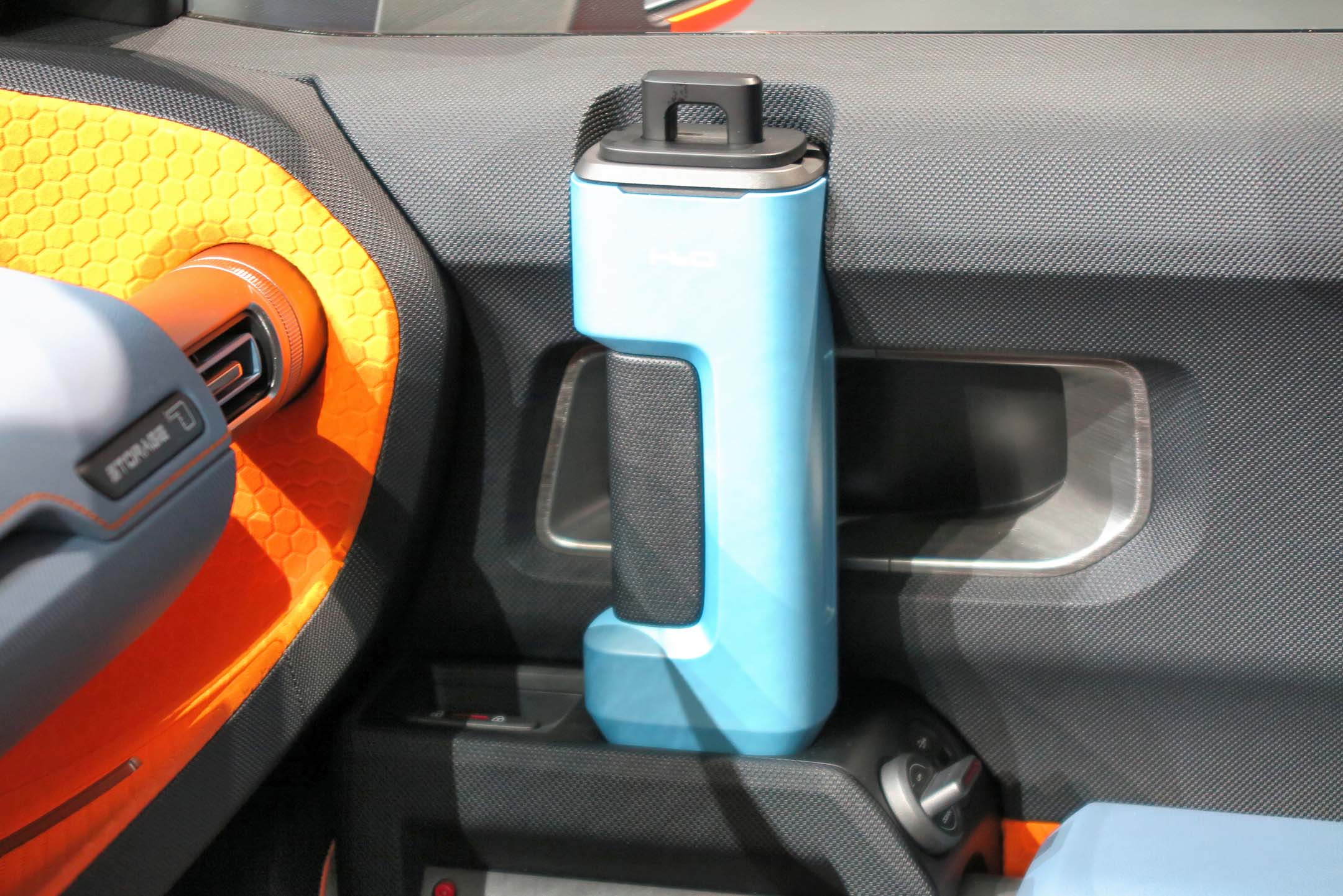 The centre armrest that says “The North Face” on it? Also removable, and doubling as a sleeping bag. The blue door armrests on the front doors double as sealed storage boxes.

Once you’ve got all your connections connected, the rear cargo area can be enlarged by folding the second-row benches into the floor, leaving an easily loadable surface perfect for surfboards or fixie bikes. It’s a little Honda Element, but that car has almost reached cult status these days and I can see why Toyota would look to it for inspiration. 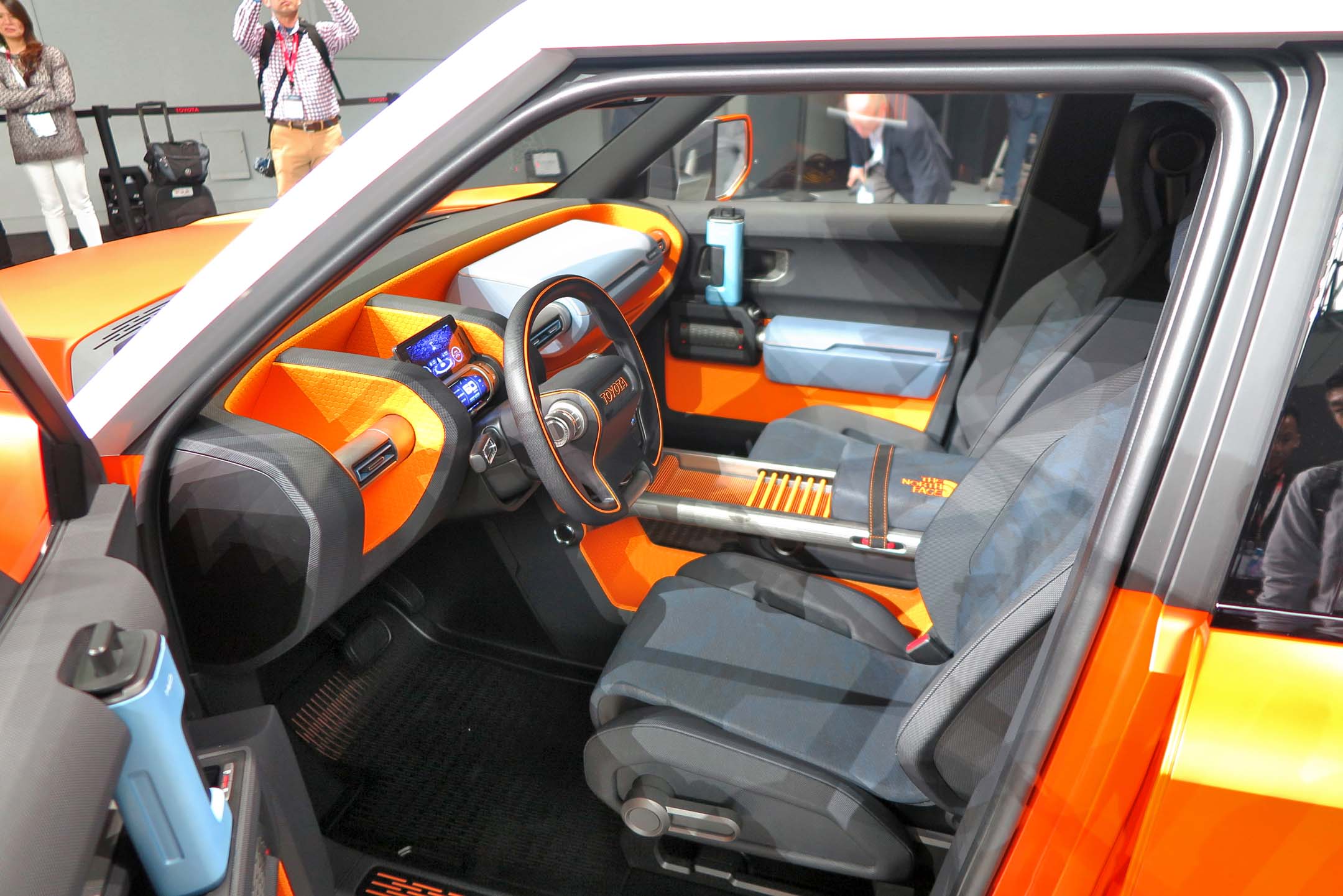 While the concept has no powertrain, Toyota says the engine bay could easily accommodate a small four-cylinder powerplant much like the one found in the C-HR, and the FT-4X – stick with me here – also gets a mechanical four-wheel-drive set-up with selectable low-range, hence Hunter’s “more like a truck” claim.

For now, the FT-4X remains just a concept, but if Toyota is serious about attracting yet more millennials to the brand, I’d be watching what happens with the FT-4X going forward very closely.