Ford and GM have created a new 10-speed automatic – each building and calibrating theirs in-house – and have begun bolting it into various models, including the 2017 Ford F-150 with its revised 3.5-litre EcoBoost V6. With the revisions, the latest F-150 now employs little less than the market’s very latest in fuel-saving tech for big torque and smaller fuel bills.

But will the transmission be constantly hunting for the right gear? Will it be shifting all the time? Is it too complicated? Too big? Too heavy? Ten gears is a lot. Why doesn’t it have nine gears? Or 11? Or 34?

I talked to Ed Krenz, the Chief Functional Engineer at Ford Performance, and Al Bruck, Ford’s Global Transmission and Driveline Calibration Manager, ahead of a recent test drive of the 2017 F-150, for a little more insight.

“For fuel efficiency, a perfect setup would be a continually variable transmission (CVT),” Krenz commented. 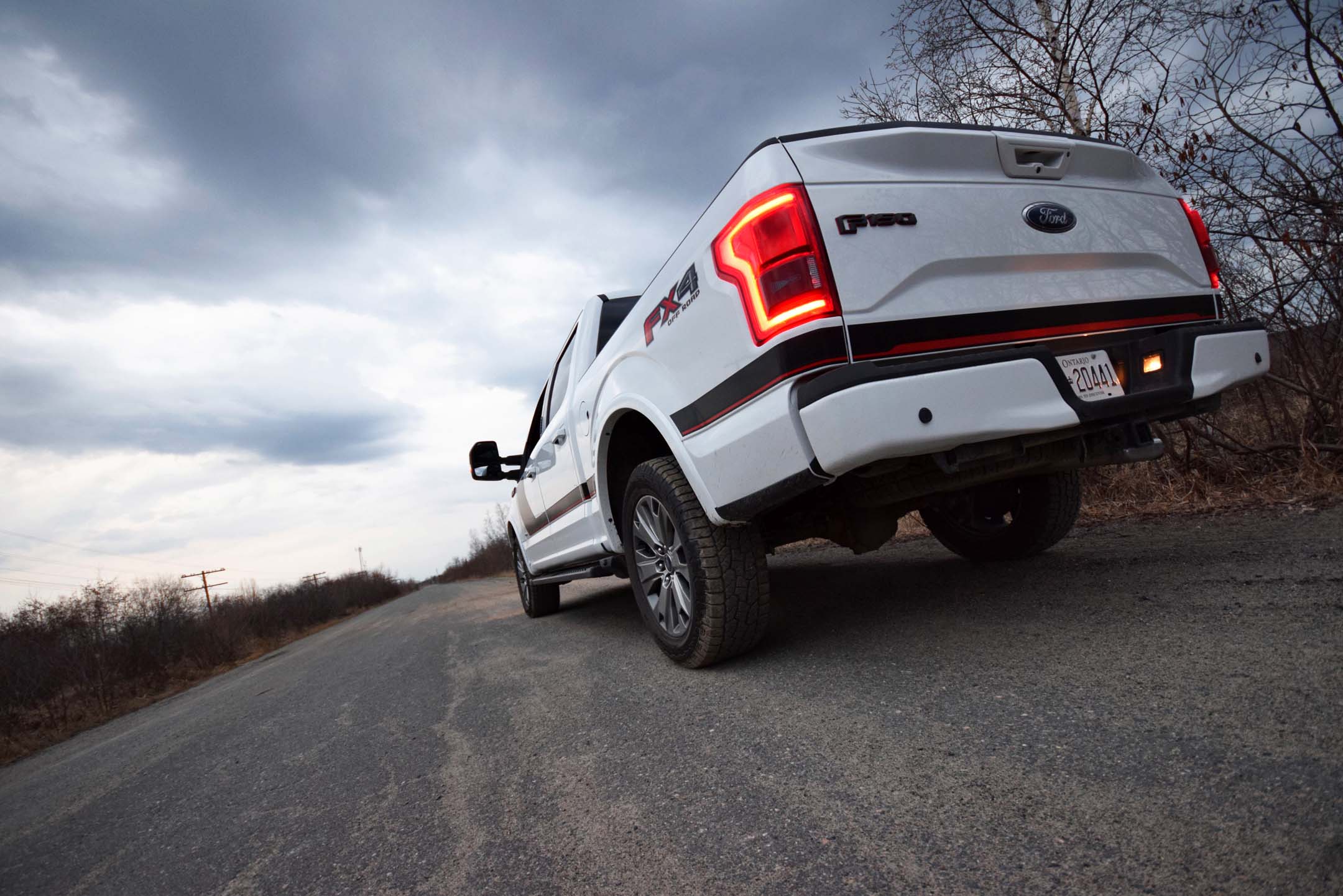 CVT transmission technology has advanced to become smooth as ever, with proven fuel-saving benefits, and operation so discreet that the average driver will never pay attention to it. But this type of transmission isn’t used in pickup trucks.

“For a number of reasons, a CVT isn’t an ideal solution in a pickup,” Krenz adds. “But a transmission with more gears than less – or 10, in this case – achieves a similar goal. We needed to pick what was reasonable in terms of ratio span and step sizes to meet performance and fuel economy targets. This means increasing the number of speeds in the transmission.”

Al Bruck adds, “With our new transmission, seventh gear is 1:1, with three overdrives on top of that. We have a deep first gear too, for optimized launch performance – say, when pulling your boat out of the lake.”

From the driver’s seat, the additional gear ratios, and the transmission as a whole, are largely invisible. This gearbox works and functions and feels just like almost any other automatic.

Remember when six gears in a transmission seemed like a lot? Reviewers and owners and YouTube commenters and skeptics all talk of hunting, confusion and too much complication. So: Is 10 too many?

Krenz comments, “Sure, 10 gears can be too many, if you use them all in order, but we don’t. We’ve got a special shift logic, and the transmission doesn’t necessarily use all the gears, one after the other, every time. It can skip gears in both directions, all through the software. It has 10 gears to pick from at all times, so, it can pick the best ones for the situation. At a light throttle launch with no trailer, it may shift from first to third to fifth, for instance. With a heavy trailer, or full throttle launch, more of the gears are used in order. Driver demand is always considered – but the transmission doesn’t have to shift through all the gears.” 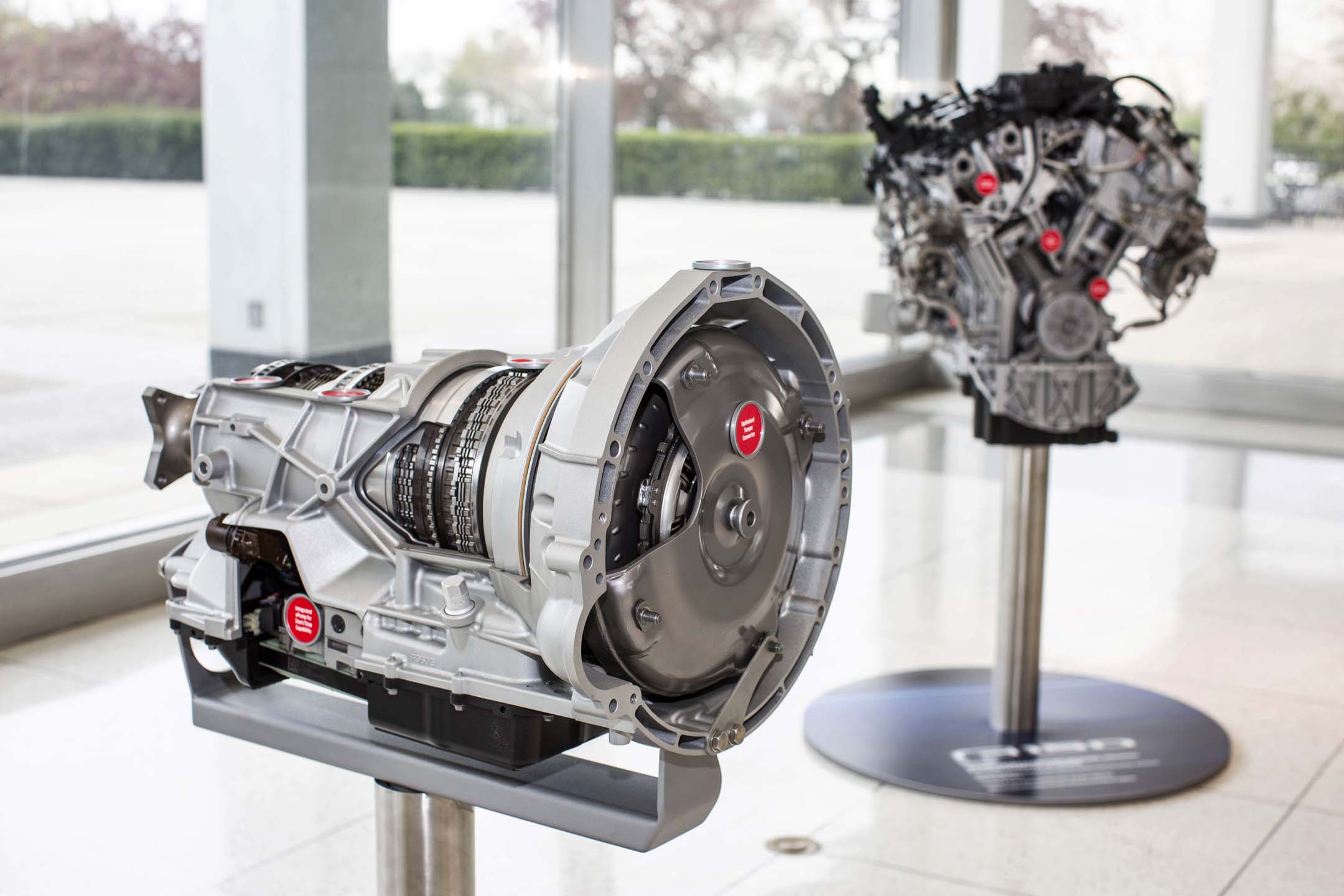 To see why, test drive a Ford F-150 and use the manual mode to instruct the transmission to shift through all 10 gears in order. Doing so, many upshifts shed 500 rpm or less from the tachometer, over and over again, illustrating exactly why the new transmission often skips multiple gears.

“It’s the same with downshifting,” Krenz says. “Our new transmission can shift from tenth to ninth if needed, or tenth to eighth, or tenth to fourth. It’s all in the programming logic, which is an evolution for us. More gears give us more layers of flexibility.”

Another layer of flexibility can be experienced in the F-150’s SPORT drive mode. Where most transmission SPORT modes re-map when and where gearshifts take place, in the new 10-speed automatic, it also enables faster actual gearshift times. With the SPORT mode off, shifts are all but undetectable, unless moderate to heavy throttle is applied, where they can be felt slightly. In SPORT mode, the shifts are harder, faster and more abrupt – even bordering on harshness at times. Here, it feels more like an older pickup with a performance transmission shift-kit installed.

The new 10-speed unit is always monitoring dozens of inputs, dozens of times per second, to help it make the right decision. A lot of factors are being constantly weighed and calculated. That’s another potential concern: Will the transmission be clumsy? Make mistakes? Need to learn your driving style before operating smoothly?

Turns out, with Ford’s new 10-speed, that’s no longer a concern. 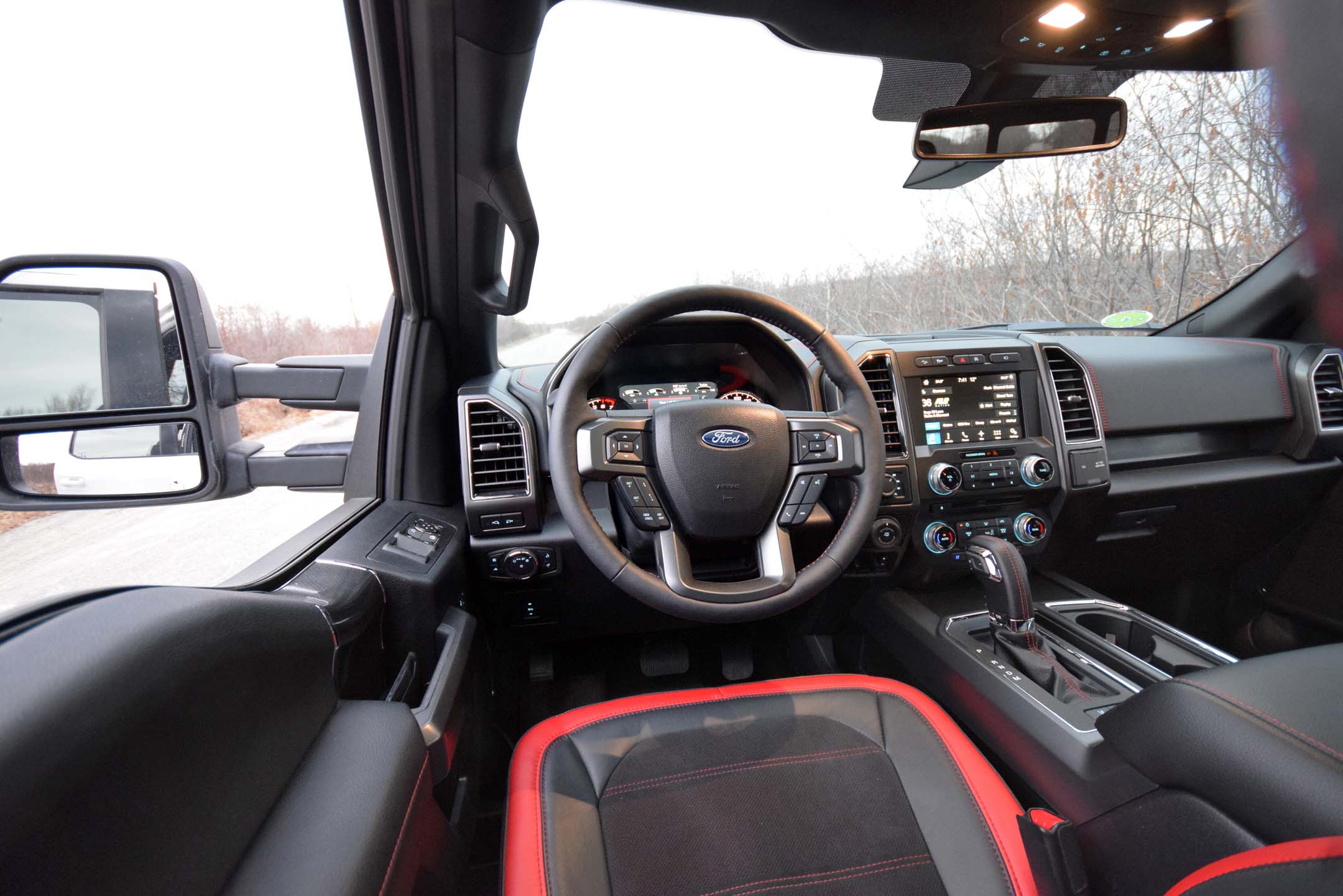 Bruck explains, “Transmission learning, in this case, is not about your driving style or locale, it’s about self-adapting the hardware to the software. Various parameters and inputs and temperature ranges come into play, and the hardware and software need to synchronize themselves. The transmission learns as it encounters various operational conditions – not driving styles. It’s constantly monitoring and adjusting itself, but it doesn’t have to adapt to the driver: it’s preprogrammed and optimized for everyone. The learning is to ensure the hardware and software work well together.”

Further, the transmission undergoes a process called “deadbanding”, where an operational baseline is set, and very miniscule fine-tuning adjustments and optimizations can be deployed as the transmission ages.

“It’s very fine tuning, even slight adjustment to fluid pressures,” Bruck says. “It’s minor – the customer probably won’t even notice. But it’s a pursuit of perfection, ensuring performance is consistent through the life of the product.”

Another common question from truck enthusiasts in your writer’s Northern Ontario locale goes something like this: “Isn’t that too complicated? Will it be more likely to break with all those gears? Sounds like overkill!”

(Note that similar scepticism has been leveled at things like power windows, fuel injection and automatic transmissions in general, over the years.)

Krenz comments, “We test and develop extensively. We did a lot of cold testing, down to 40 below as a minimum. We have to ensure functionality across all temperature ranges. We sell these trucks everywhere from Alaska to the Middle East – so we test where we can find the highest and lowest ambient temperatures. We limit the vehicle speed too, during desert testing, to test mechanical and cooling capability. This transmission has been tested extensively in the most severe conditions we can find. Plus, it’s co-developed and co-built by two of the highest-volume automakers in the world.” 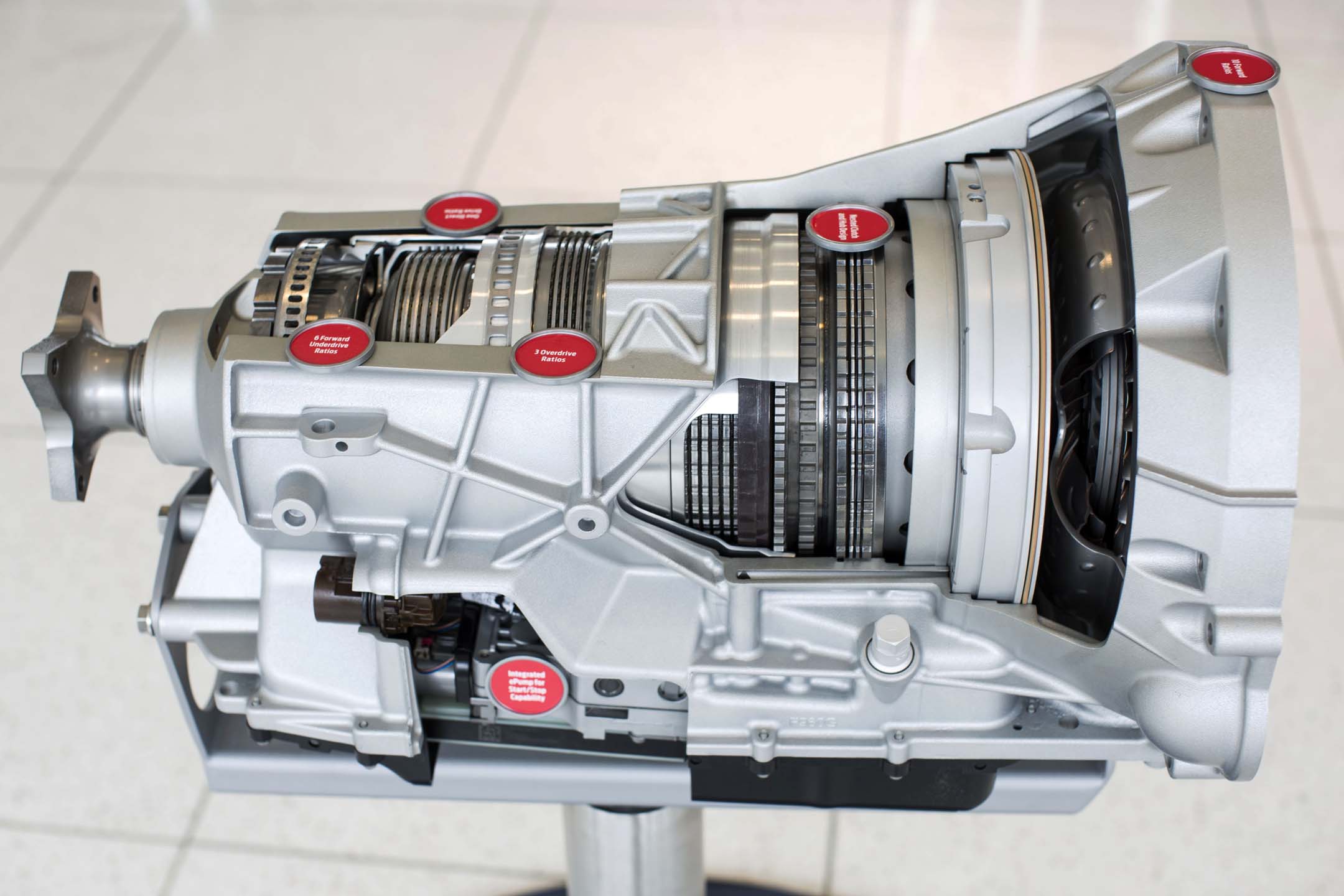 The new 10-speed automatic also features a Ford-patented internal hydraulic system, and a unique power-flow system, referring to the way internal components are connected to one another. Engineers spent extensive time minimizing relative speeds between clutches and minimizing torque losses for efficiency, and worked to reduce the number of components inside, reducing friction and pumping efforts – again, saving fuel.

Want a fun fact? The new transmission is only an inch longer than the unit it replaces, despite packing four more gears. Another? This is the first Ford transmission that uses no cast iron. The new 10-speed is made of steel and aluminum, making it stronger and lighter and more compact.

A few notes, from my test drive. The way 99 percent of people will drive their F-150, 99 percent of the time, they’d be hard pressed to tell the transmission was doing much of anything at all. The shifts are typically invisible: of thousands executed in my custody, I only felt or detected about a dozen of them. No clumsiness or hesitation was noted in any condition in the low-mileage tester. 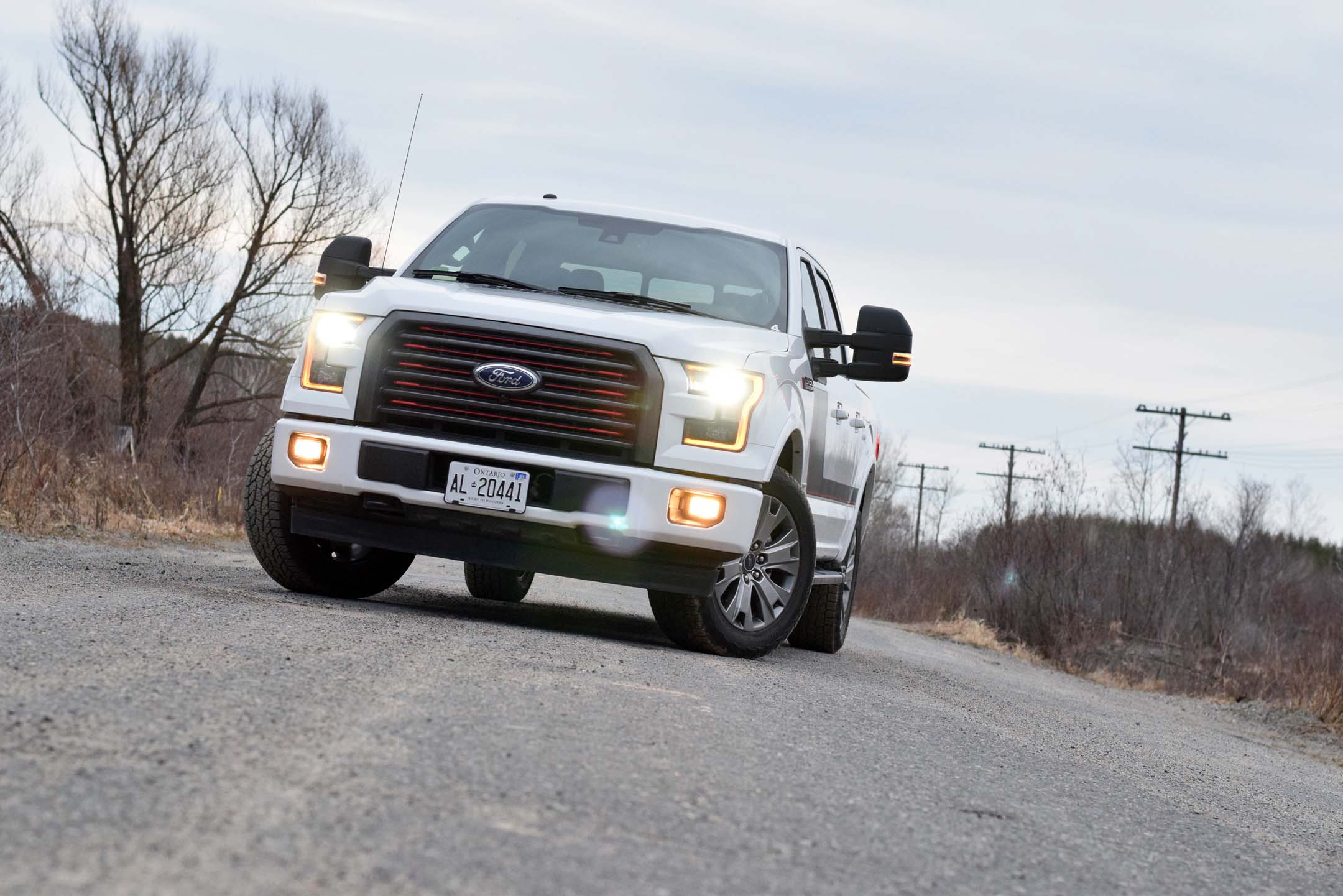 Also notable is the big low-end torque of the new EcoBoost engine, and the lack of a V8 rumble, both of which add to the driveline’s discreet operation. You barely hear the engine most of the time, and with big torque streaming through the transmission from very low revs, it doesn’t need to shift down as often as you think.

Off the line, first gear is snappy, satisfying, and nearly abrupt in how quickly it gets the F-150 moving from a dig. Cruise the highway at 110 km/h in 10th gear, and you’re spinning at about 1,550 rpm, with a fairly decent grade required to coax any downshifting.

Shoppers can expect improvements to show up in terms of acceleration performance, more eager towing performance, and a quieter ride and better mileage, thanks to lower cruising revs. But from the driver’s seat, the changes are discreet, and largely undetectable. The move from six to 10 gears is a big one – but in this case, requires no additional thought, input or compromise for the driver.