Illustrated Guide to Car Batteries – of All Types

Batteries are all around you – in your computer, your phone, your car keys, your computer mouse, and more. Probably, you’ve got three or four batteries in close proximity to you, right this very moment.

Virtually nowhere is this more true than in the world of the automobile. Below, we’ll look at some battery basics, and dive into what sorts of batteries are used in various parts of your ride, and why, and what makes them tick.

How a Battery Works 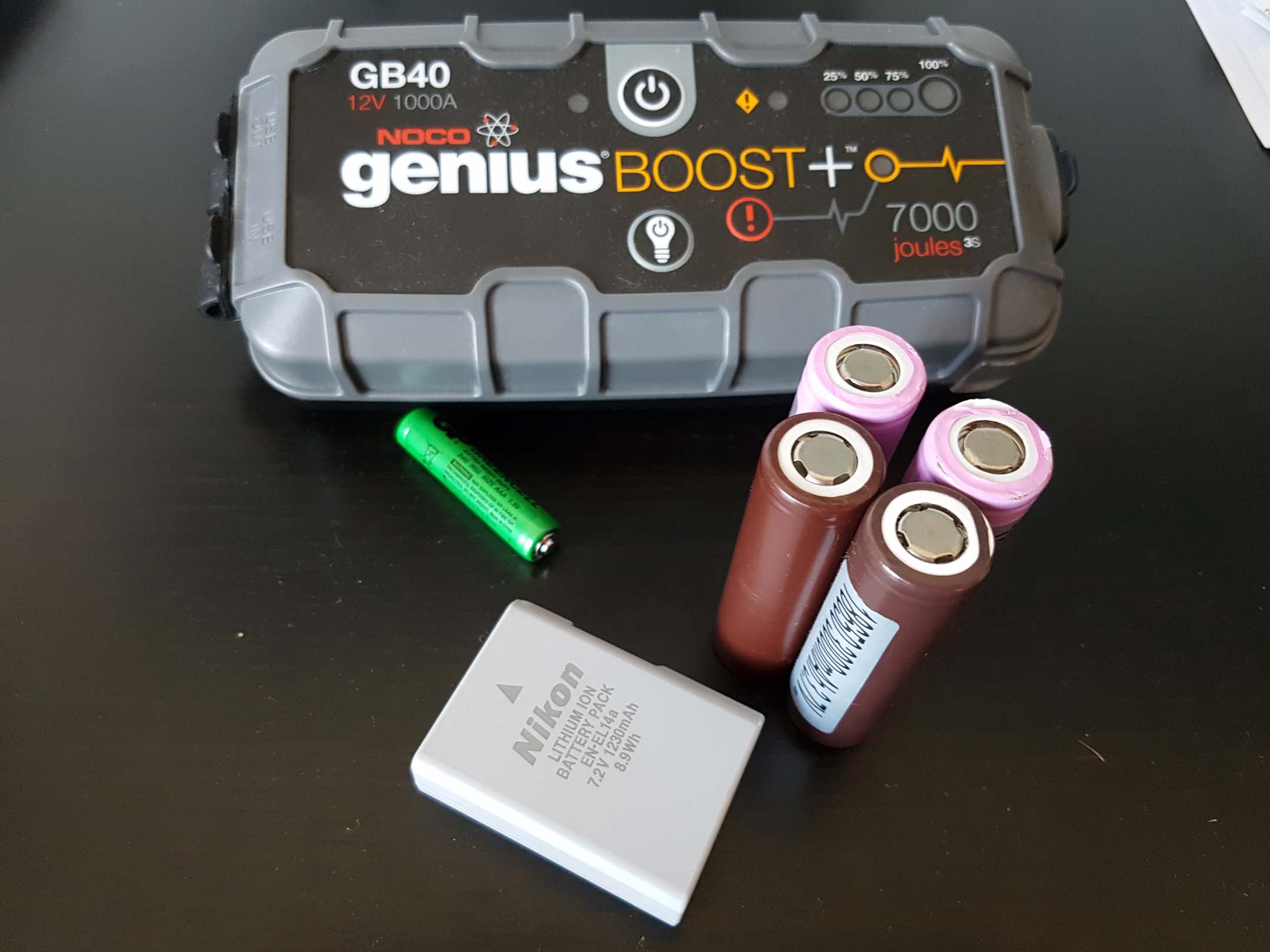 In ultra-simple terms, a battery is a container or cell housing a chemical mixture, called an electrolyte. When an electrical device is hooked up to a battery, a chemical reaction takes place within that electrolyte, which creates electrical energy that flows through the circuit. That energy can power anything from a small light bulb or transmitter to an electric motor, or a booster pack, or a power backup unit. 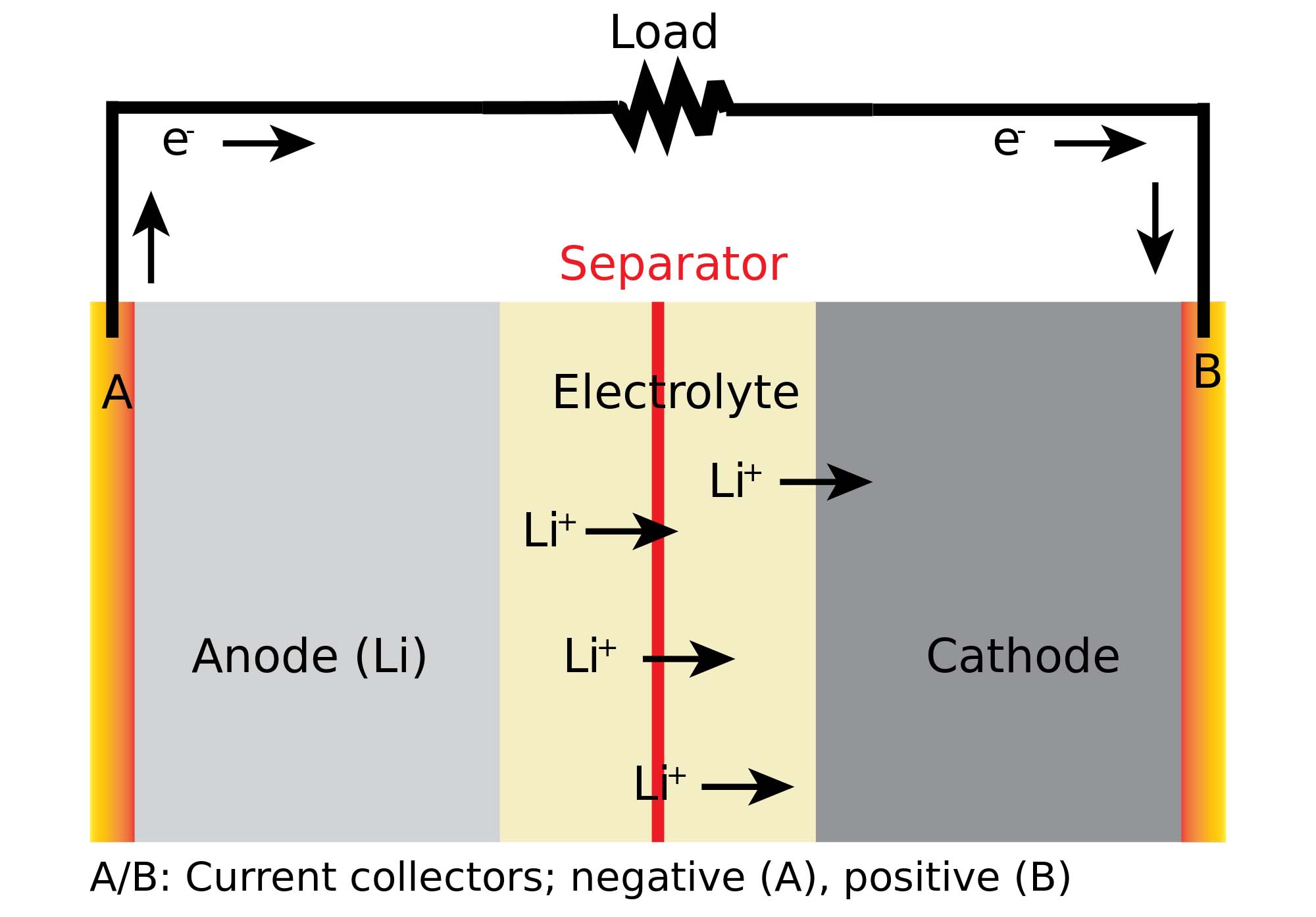 The anode and cathode comprise the negative and positive parts of the battery. When the electrolyte within the battery undergoes its power-generating chemical reaction, electrons build up at the anode, and flow to the device to which the battery is attached. 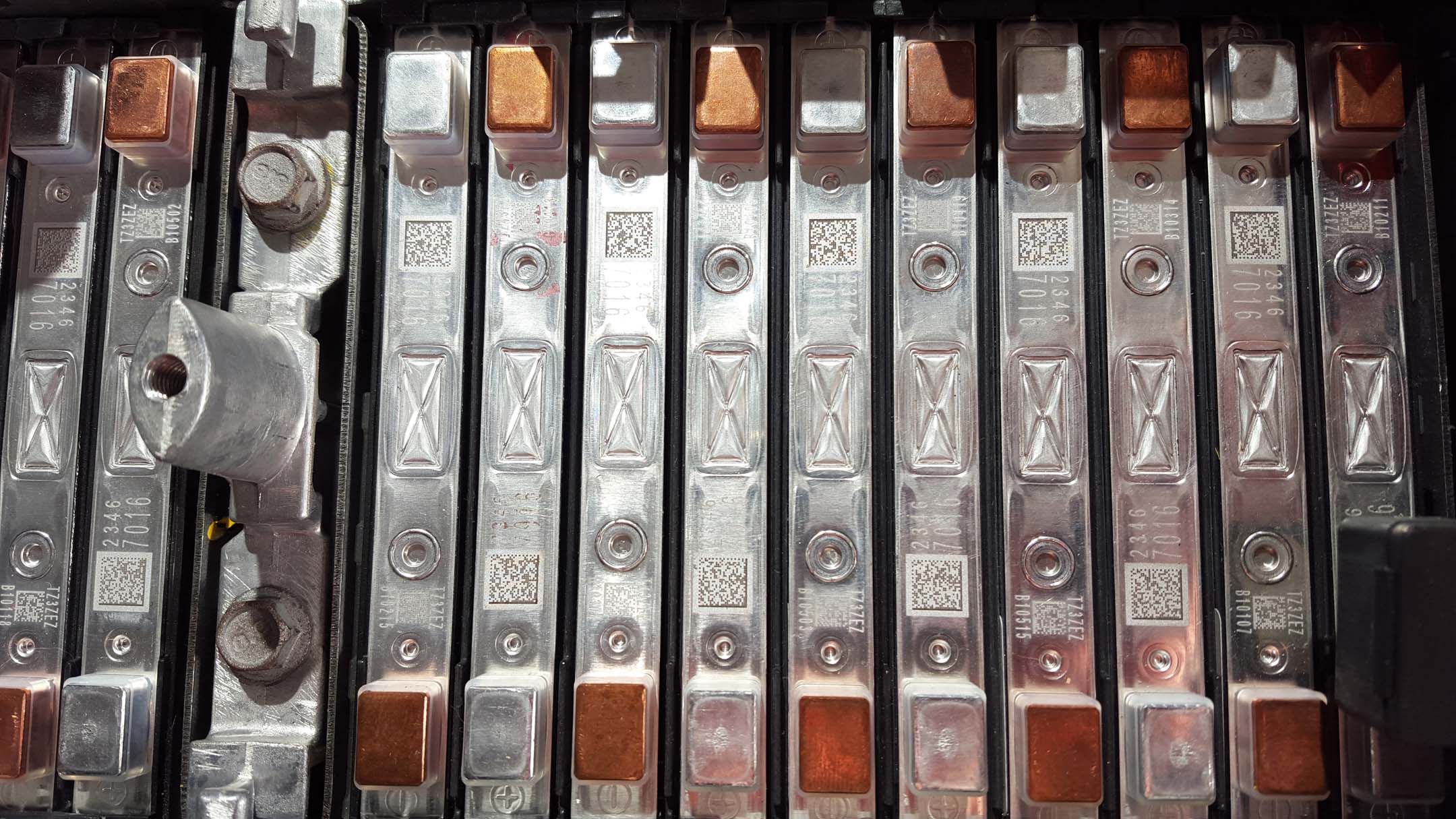 In a battery, one or more cells are combined. Smaller batteries may be of the single-cell variety, in which there is one container or cell within which the chemical reaction takes place. Other batteries use multiple cells combined into a single package, which are sometimes called modules. As an example, the AA battery in your flashlight is a single-cell battery, but the battery in a hybrid car typically consists of many smaller cells joined together into modules, and those modules are combined into a larger casing, which comprises the battery pack. 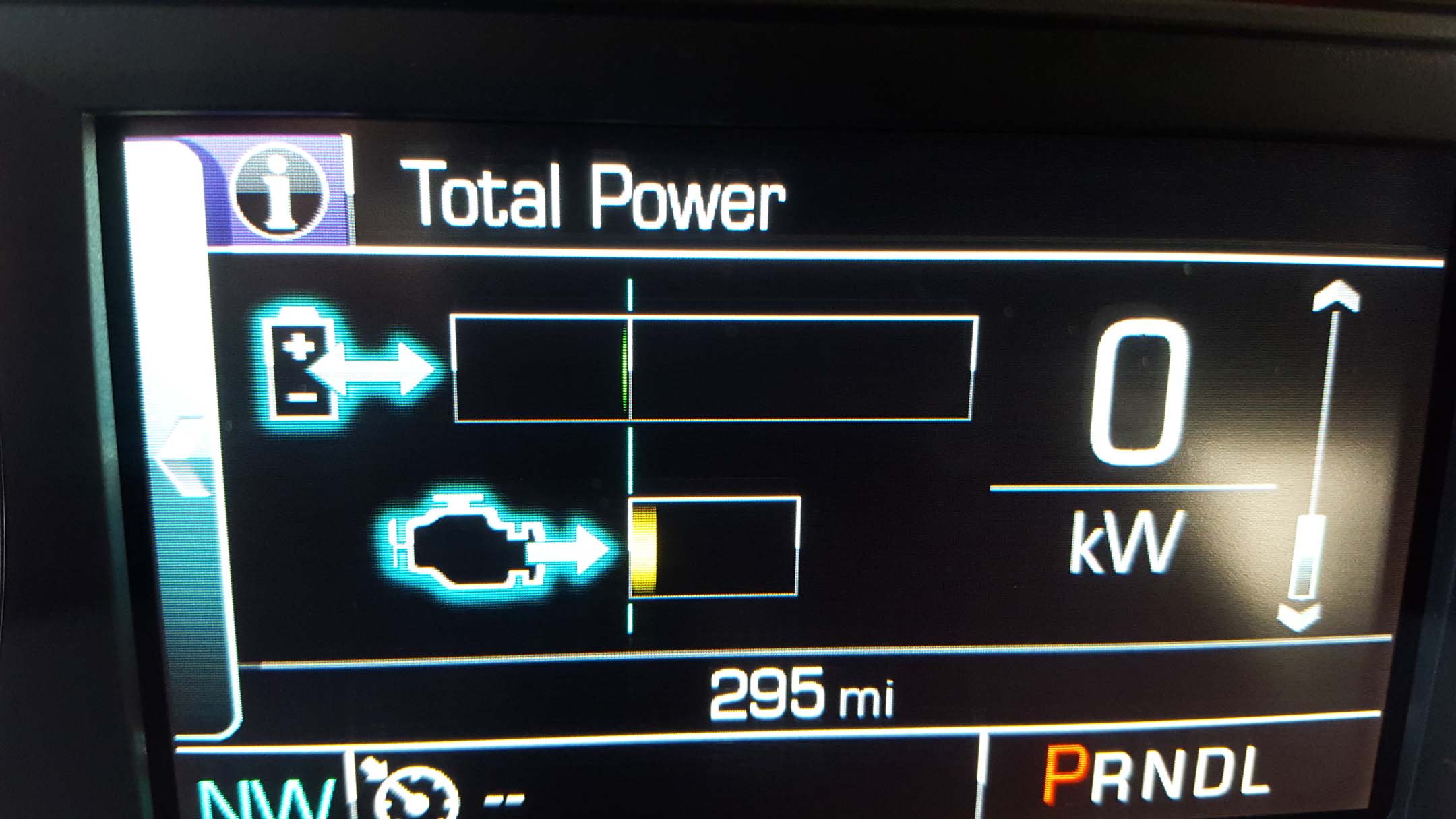 Sometimes, batteries are rated in terms of their energy density, which is the amount of energy stored in a given unit of volume or space. Batteries also have a discharge rate, which is a measure of the rate of battery discharge relative to its maximum capacity over the span of one hour. Put another way, the discharge rate is the current required to empty the entire battery in one hour. 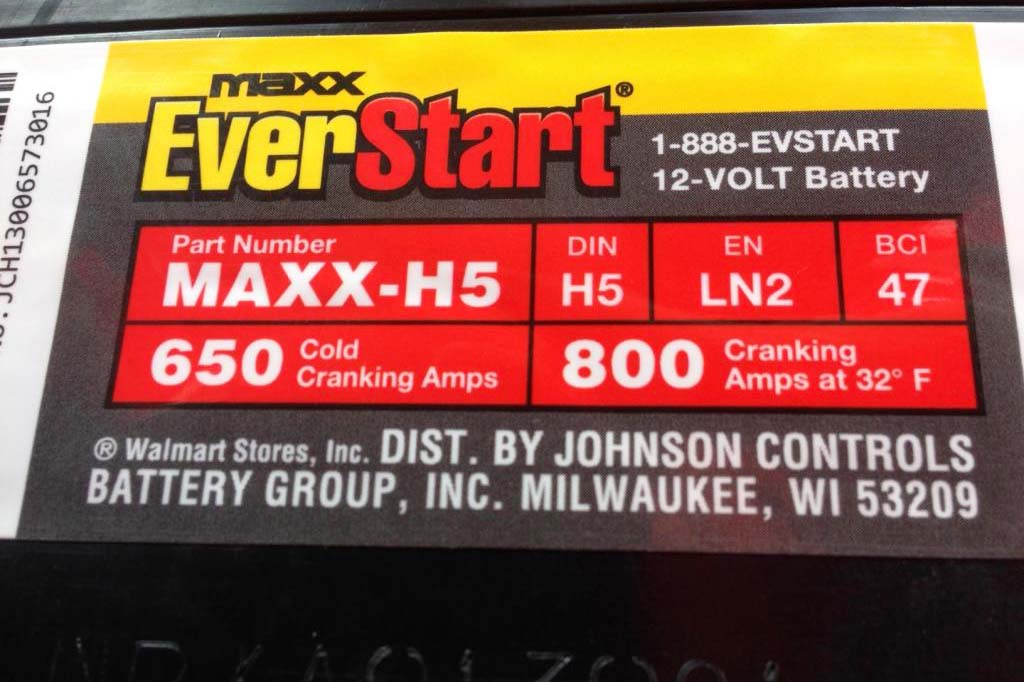 If you’ve ever shopped for a new car or truck battery, you’ve probably come across the term Cold Cranking Amps. This bit of battery industry lingo helps shoppers compare battery performance across products in relation to cold-weather starting. Cold Cranking Amps refers to the amperage output a car battery can sustain at 0 degrees Fahrenheit for 30 seconds, while maintaining a voltage of at least 7.2 volts. Translation? More CCA means better battery performance during engine start-up in the cold.

How your Ride Uses Batteries 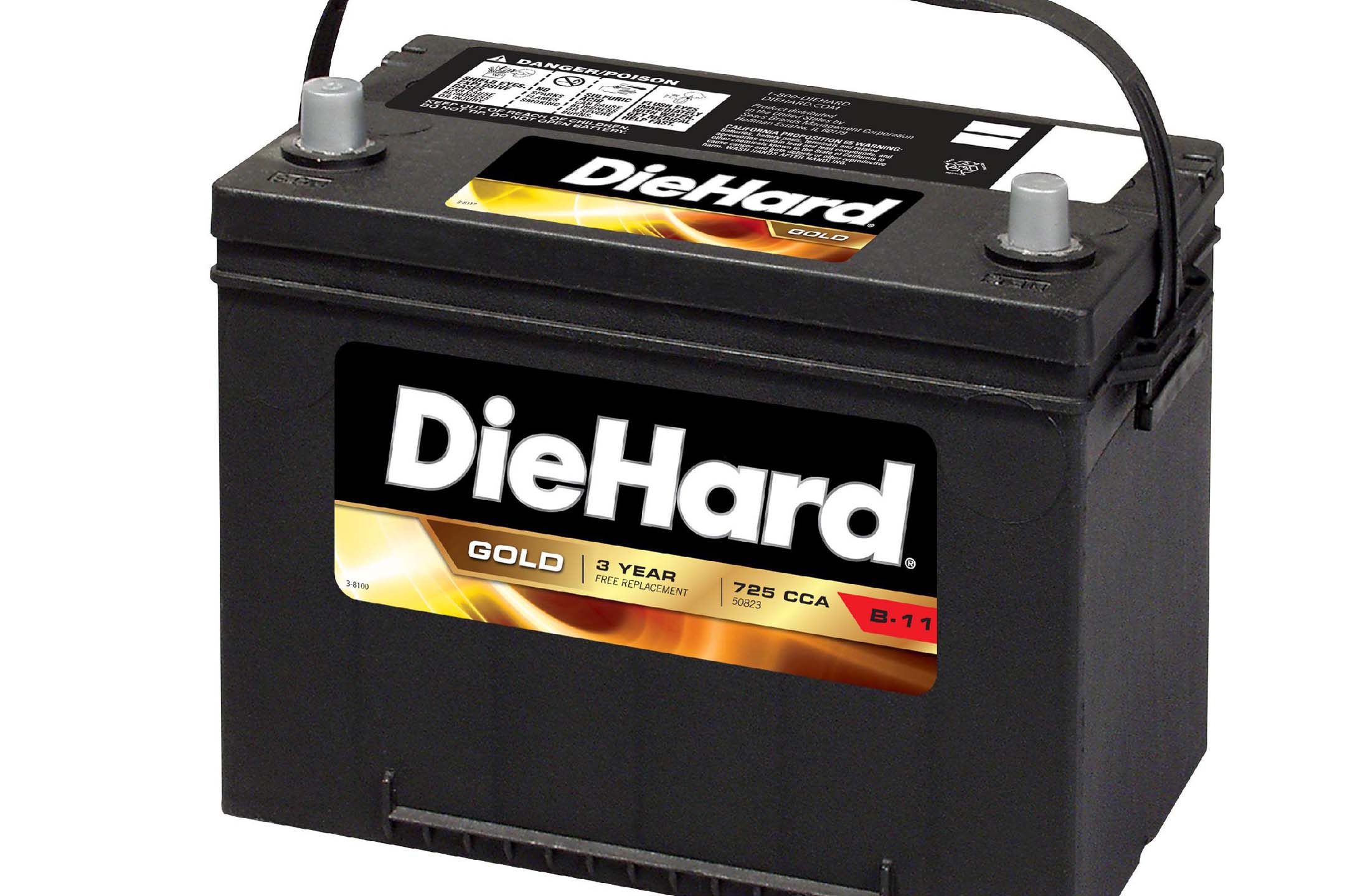 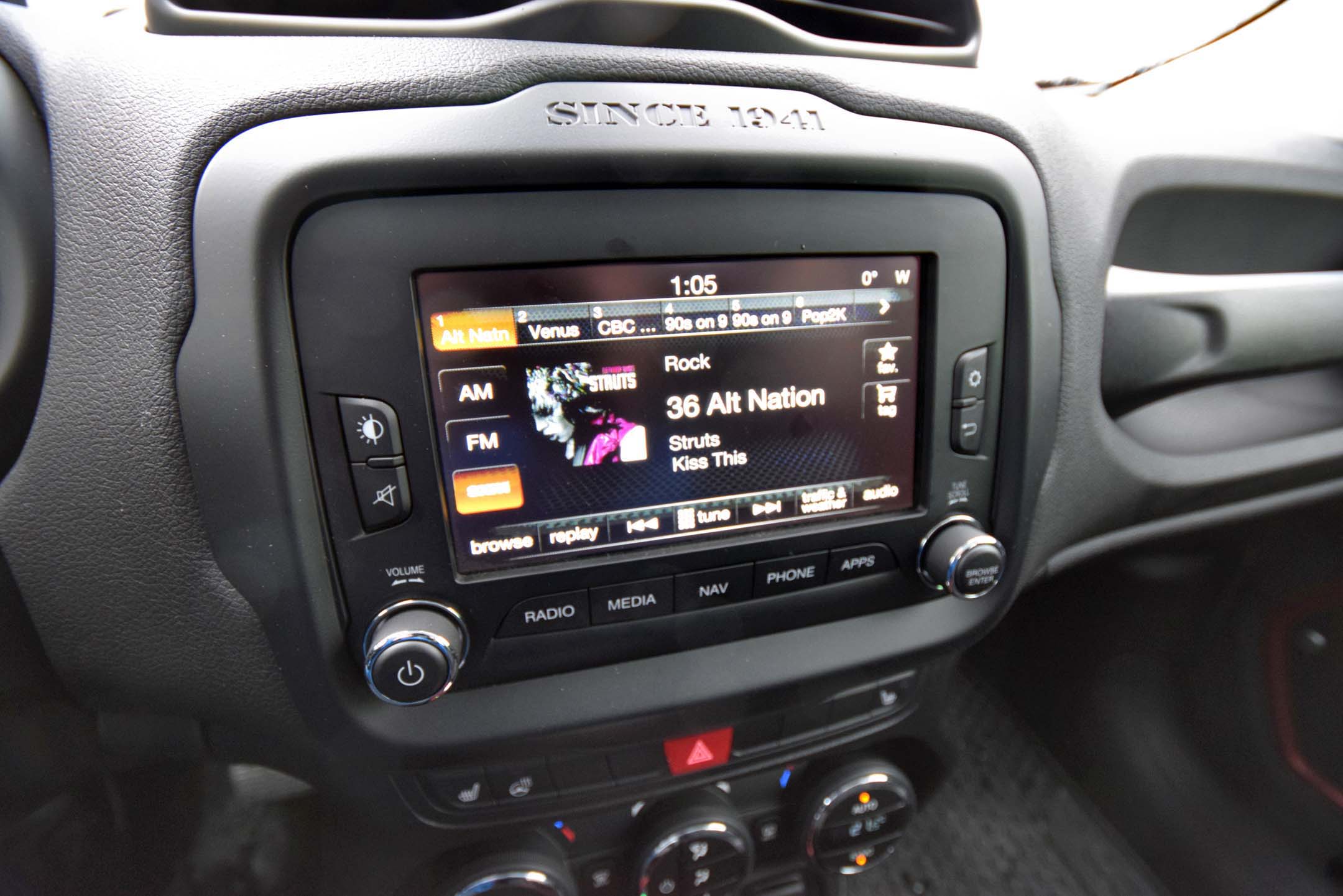 Some vehicle systems, including the stereo, central media interface, engine control module, and more, are fitted with a small, single-cell battery that keeps low-draw circuitry powered, even if the conventional 12 volt battery is disconnected or completely discharged. By using this miniature form of battery backup, loss of programming, preferences, and information is prevented. 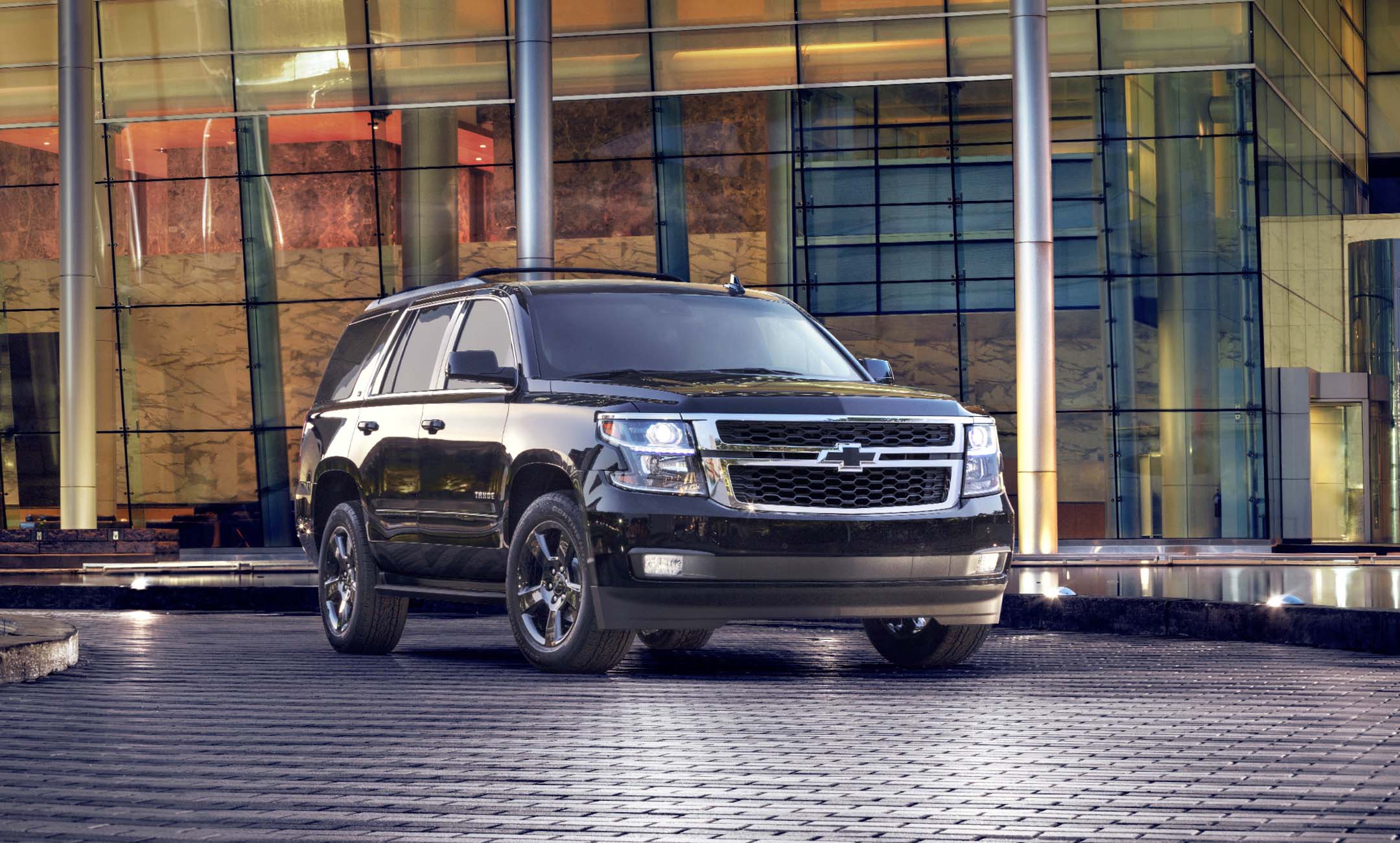 When car thieves steal a vehicle’s parts or contents, they’ll often disconnect the 12 volt battery to prevent the alarm from sounding for an extended period. GM has created a great defence to this tactic by using an alarm system powered by a separate, remotely located battery. This way, the alarm will continue to function, even if the 12 volt battery connection is severed. 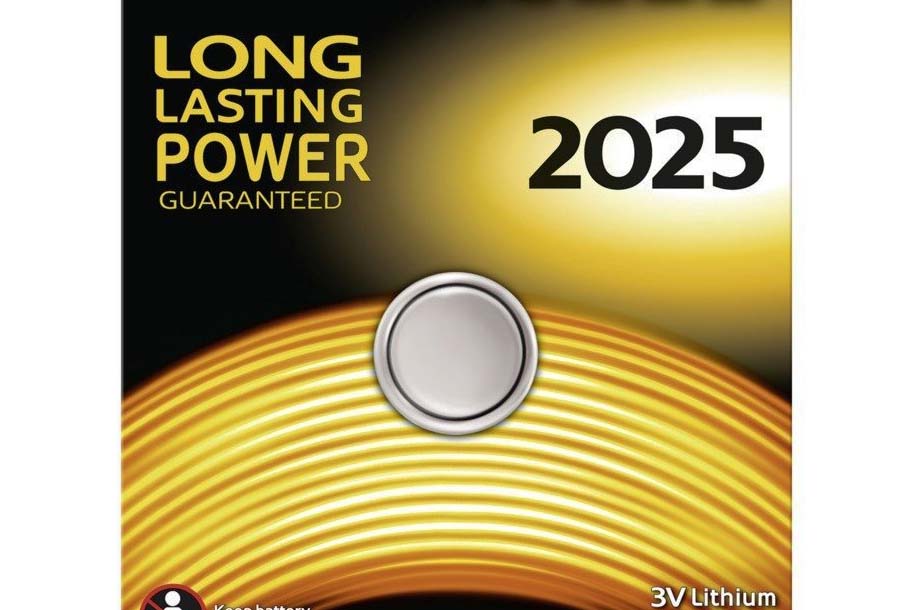 If you’ve got a remote keyfob for your ride, chances are it uses a small, coin-sized battery, like a CR2025. This battery is a lithium single-cell battery, about the size of a nickel – and it’s made to last a long time. 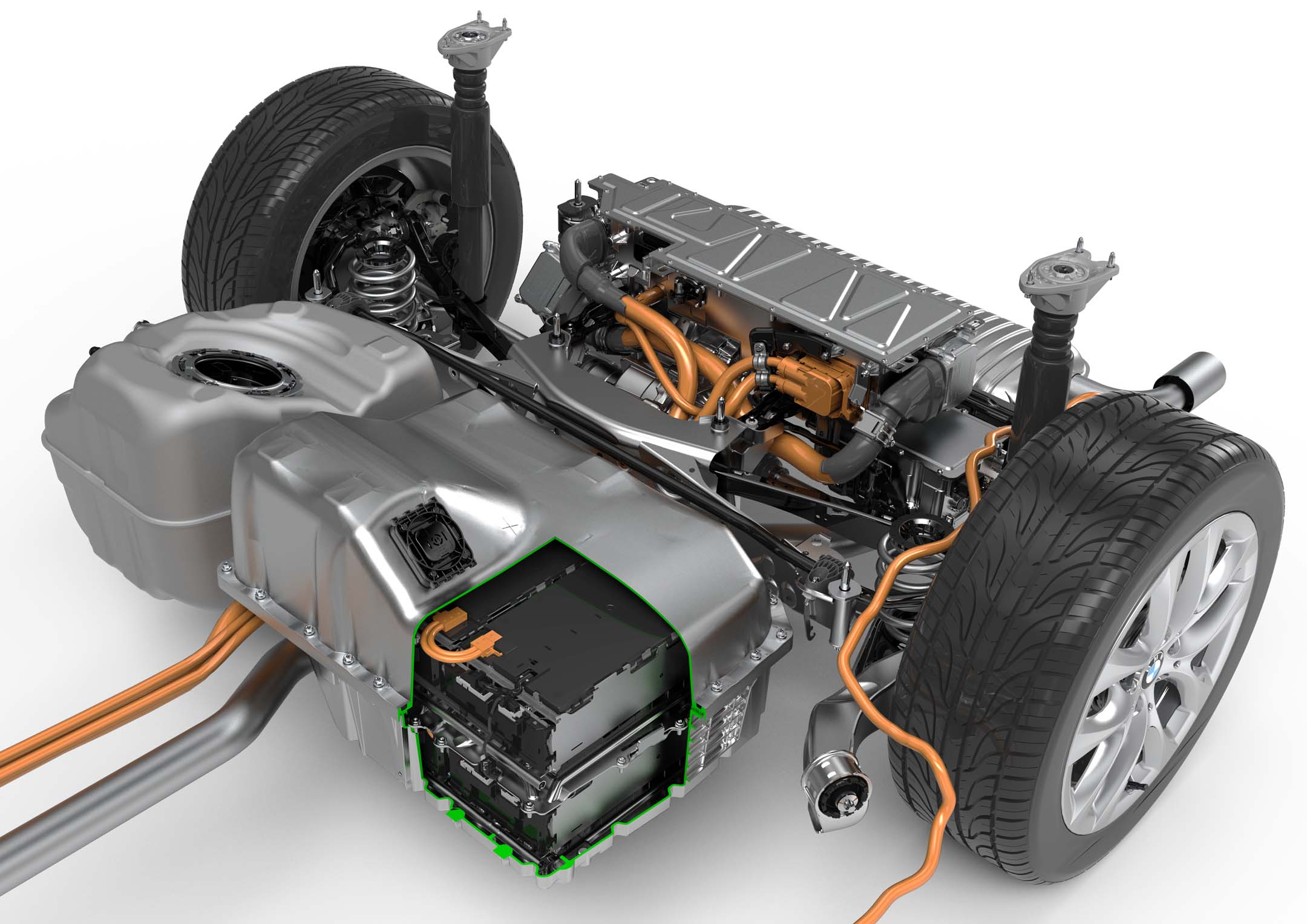 If you drive a hybrid or electric car, a battery pack is mounted somewhere inside or underneath. It consists of numerous cells, joined together into numerous modules, and housed within a casing designed to a specific shape that fits snugly into some part of the vehicle’s body or structure. As consumers demand less compromise from electrified vehicles, hybrid and EV battery packs are getting smaller – thanks in part to new battery chemistries, and new construction techniques that allow more cells to be fit into a smaller space. The result? Hybrid and EV batteries are simultaneously becoming more powerful and compact.

Isidor Buchmann is the CEO and founder of Cadex Electronics. On hybrid car batteries, he comments, “At roughly 1,500Wh [such as found in the Chevrolet Malibu Hybrid], the battery is only double the size of a starter battery.” 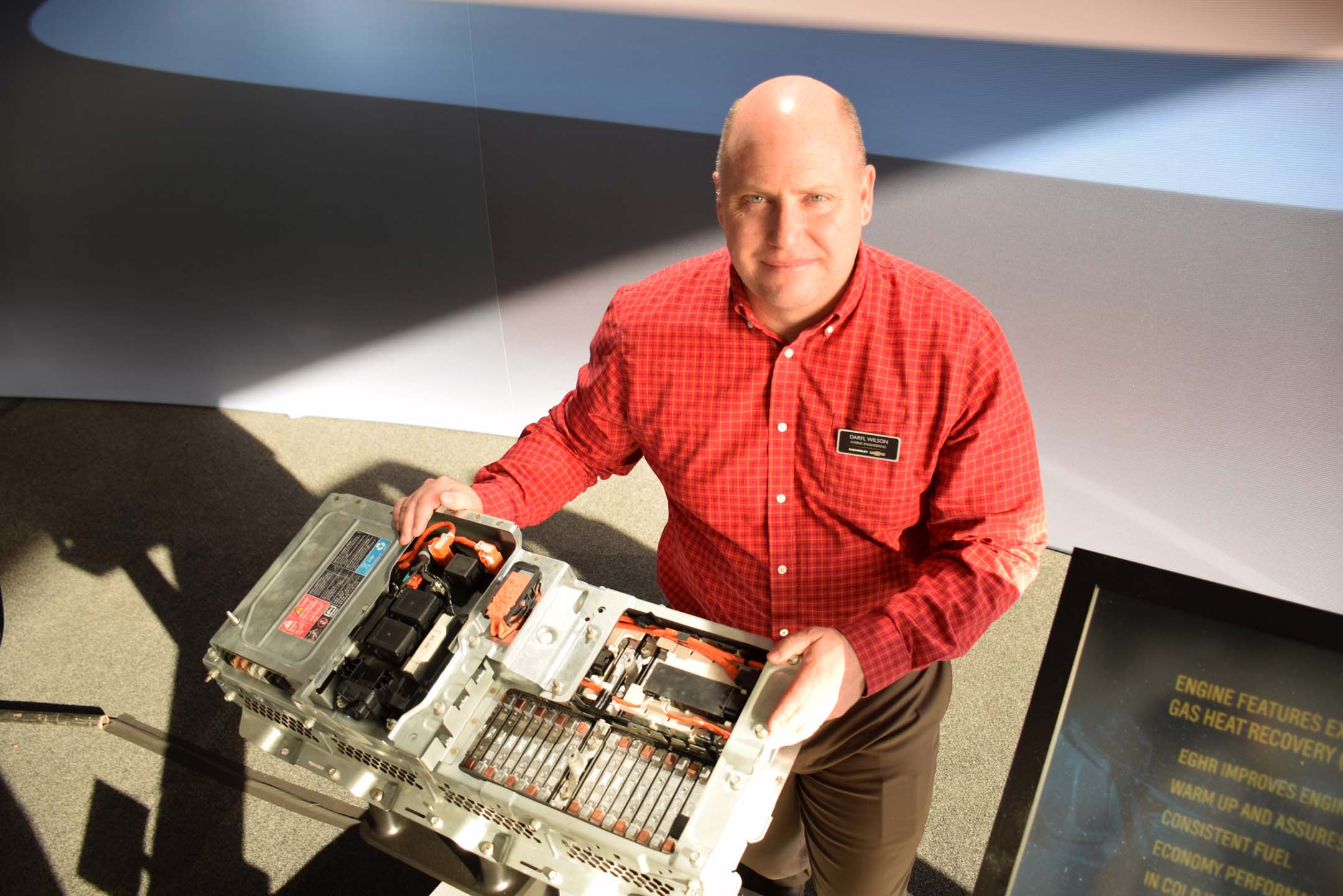 The chemical makeup of a battery defines properties ranging from its operating temperature range, ability to charge and discharge at a certain rate, how much energy it stores, how powerful it is, and more.

Buchmann comments, “Most EV’s use NMC (nickel manganese cobalt) or lithium manganese with NMC. Tesla uses the NCA (nickel cobalt aluminum) for fast charging. Most hybrids use a cobalt-based lithium ion.” In this photo, a GM engineer shows the lithium-ion battery used in the Chevrolet Malibu Hybrid.

Battery chemistry is precisely selected to best fit the need of the application for which the battery is intended. In many cases, battery chemistry is a fine balancing act – with one chemical benefit requiring a compromise somewhere else. 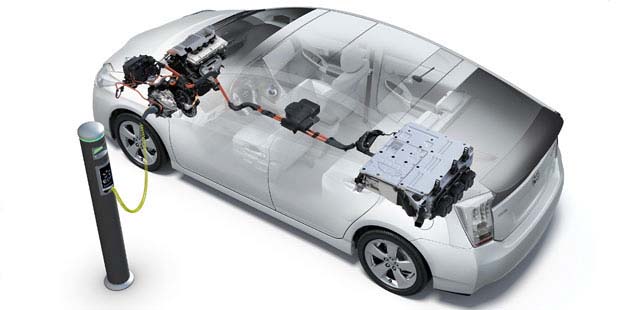 An example of the compromise listed above deals with hybrid batteries versus EV batteries. Beyond differences in size and packaging, the chemical makeup of these two types of batteries can be very different. In a hybrid car, the battery needs a chemistry suitable for fast charging and discharging, which may come at the expense of its overall energy storage levels.

In an EV, the priority is on a chemistry that enables storing a larger volume of energy to turn in a sufficient driving range, though this can come at the expense of the battery’s ability to charge and discharge quickly. For instance, according to Buchmann, EV battery fast-charging should be avoided where possible, as this can stress the batteries. Some models even keep a record of stressful battery events, like ultra-fast charging, which could be used to nullify a warranty claim. Pictured is a Toyota Prius Plug-in Hybrid.

Buchmann comments, “In a hybrid vehicle, the battery can stay in [a] mid-state of charge and delivers only short cycles. Charge acceptance [the amount of energy recovered] on regenerative braking is better if [the battery is] only partially charged.” 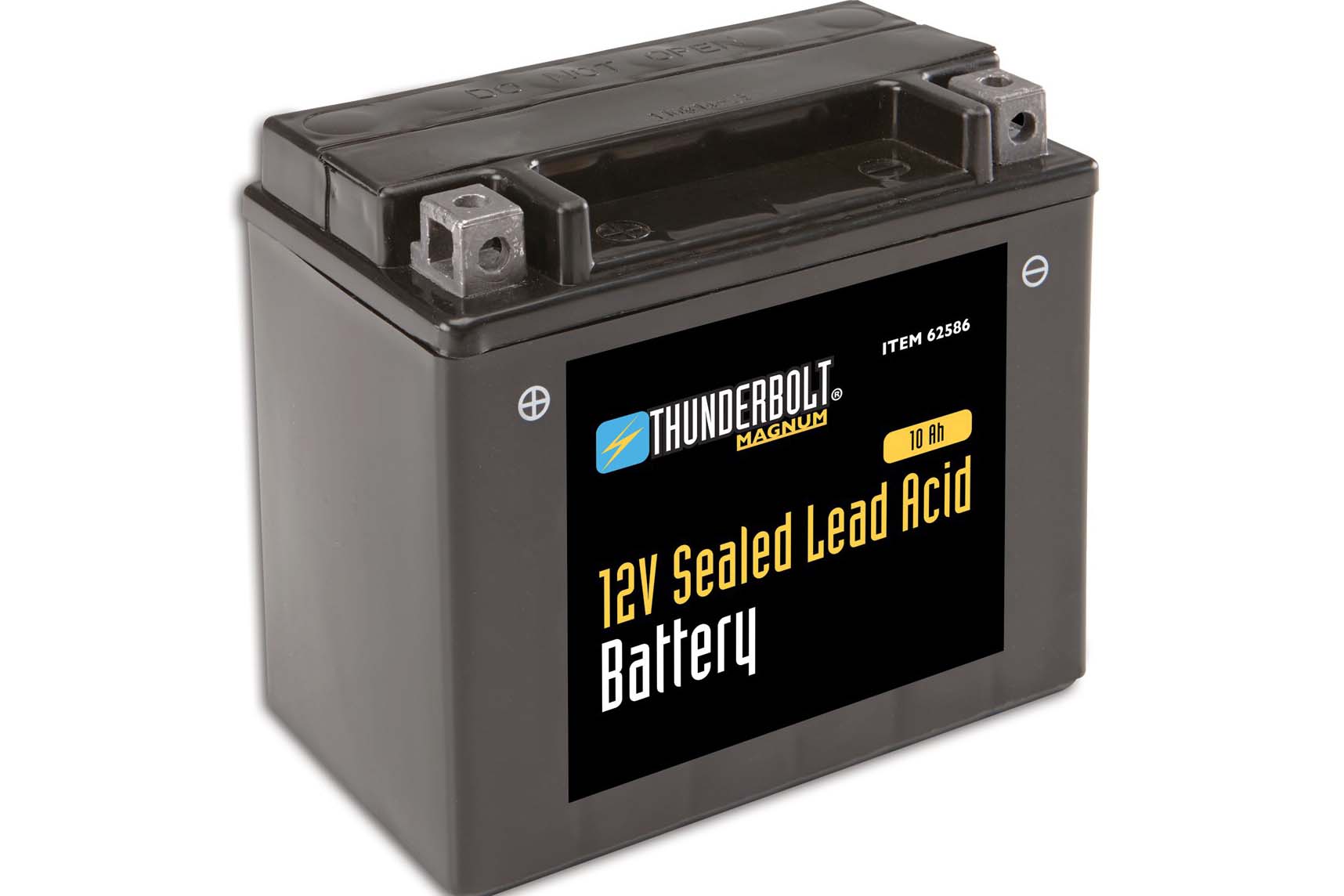 Lead-acid batteries are old school. They store lots of power, they’re cheap and rechargeable, and one of them probably starts your ride when you turn the key – even if they’re heavy, and sort of primitive. Special versions of the lead-acid battery are available for non-automotive applications, including backup power storage for power stations and cell phone towers. 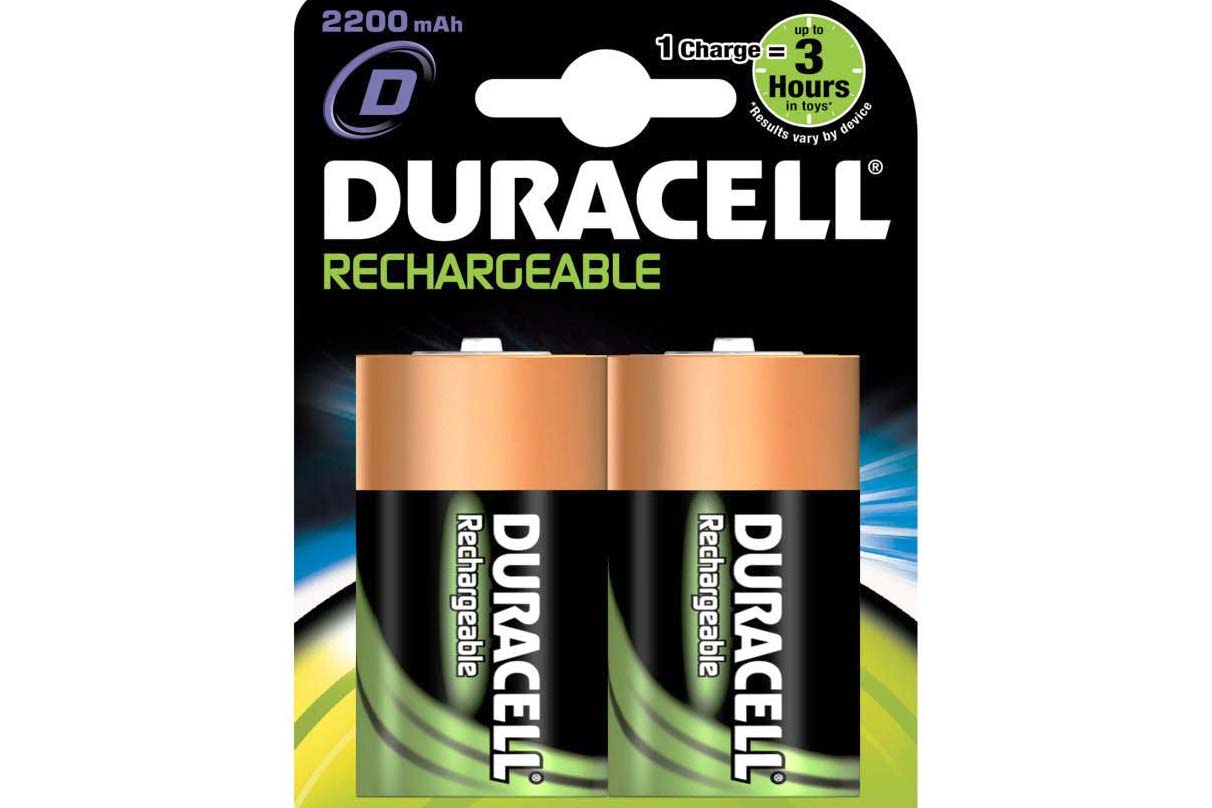 The Ni–MH battery is compact, rechargeable, and boasts a good energy density that’s closer to that of the lithium-ion battery. The Ni–MH battery responds well to trickle charging, and is commonly used in devices like digital cameras, rechargeable household batteries and portable electronics. In 2008, some two million hybrid cars were produced with Ni–MH batteries – though today, the almighty lithium-ion battery is commonly favoured. 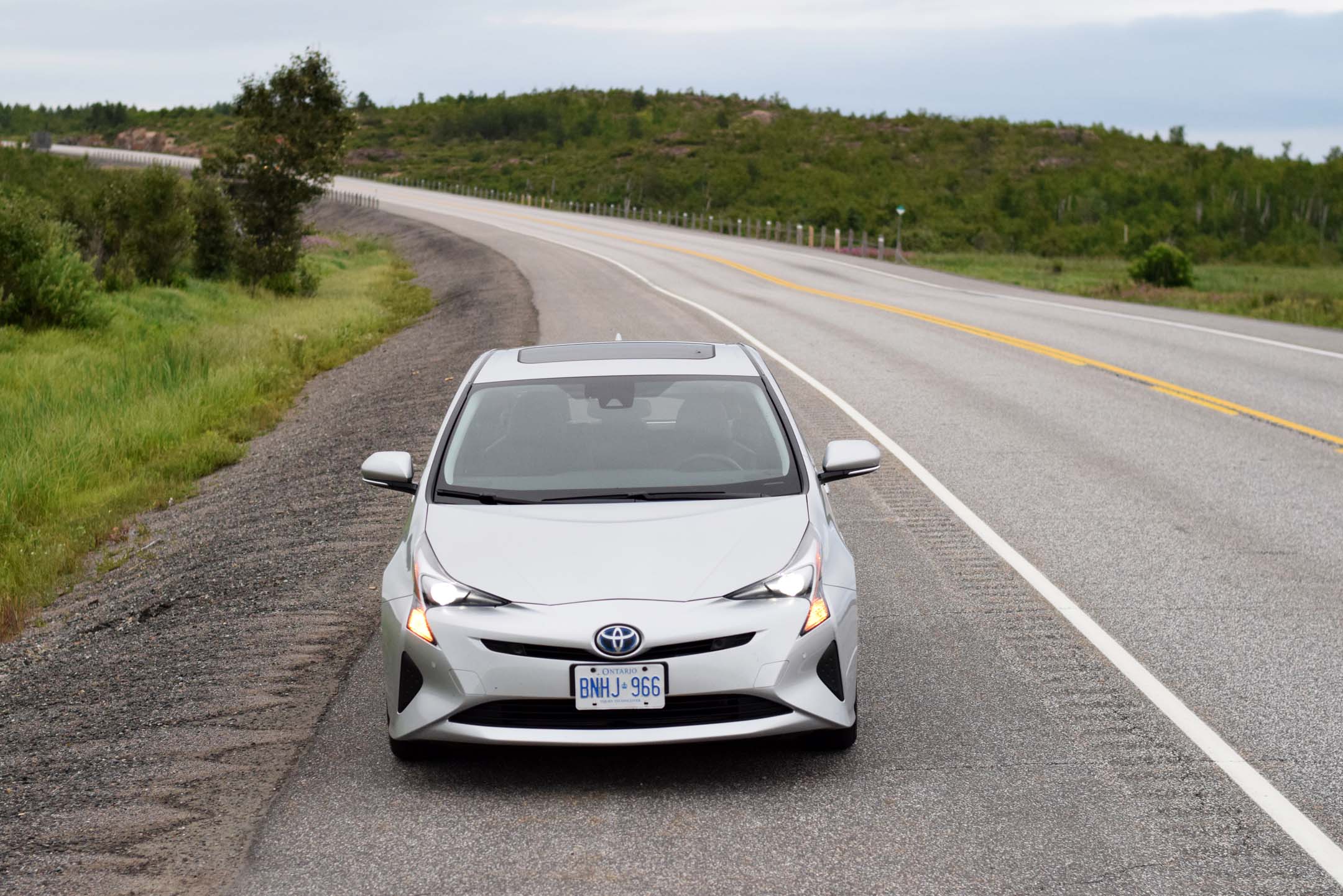 This is the go-to battery for many applications today – from cellular phone handsets to hybrid cars, like the Toyota Prius, and more. Lithium-ion batteries are smart, and they boast minimal compromises and many benefits, including minimal memory effect, high energy density, and minimal self-discharge, which is the tendency of the battery charge to diminish during periods of non-use over time. Lithium-ion batteries can replace lead-acid batteries in some applications, where they offer a significant weight savings. They’re also popular in hybrid and EV applications, though they’ve occasionally caught a bad rap on the safety front, with some laptop and smartphone batteries exploding or catching fire when recharging. 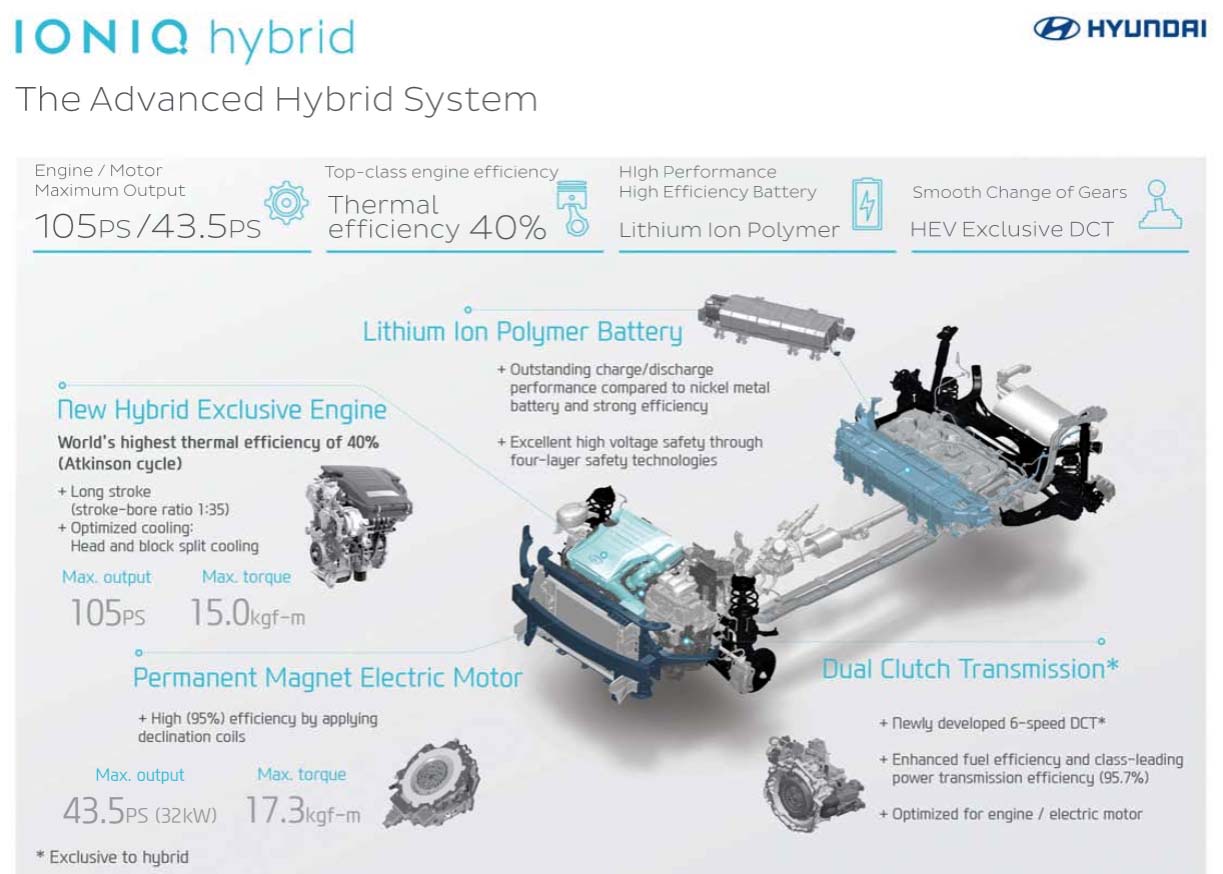 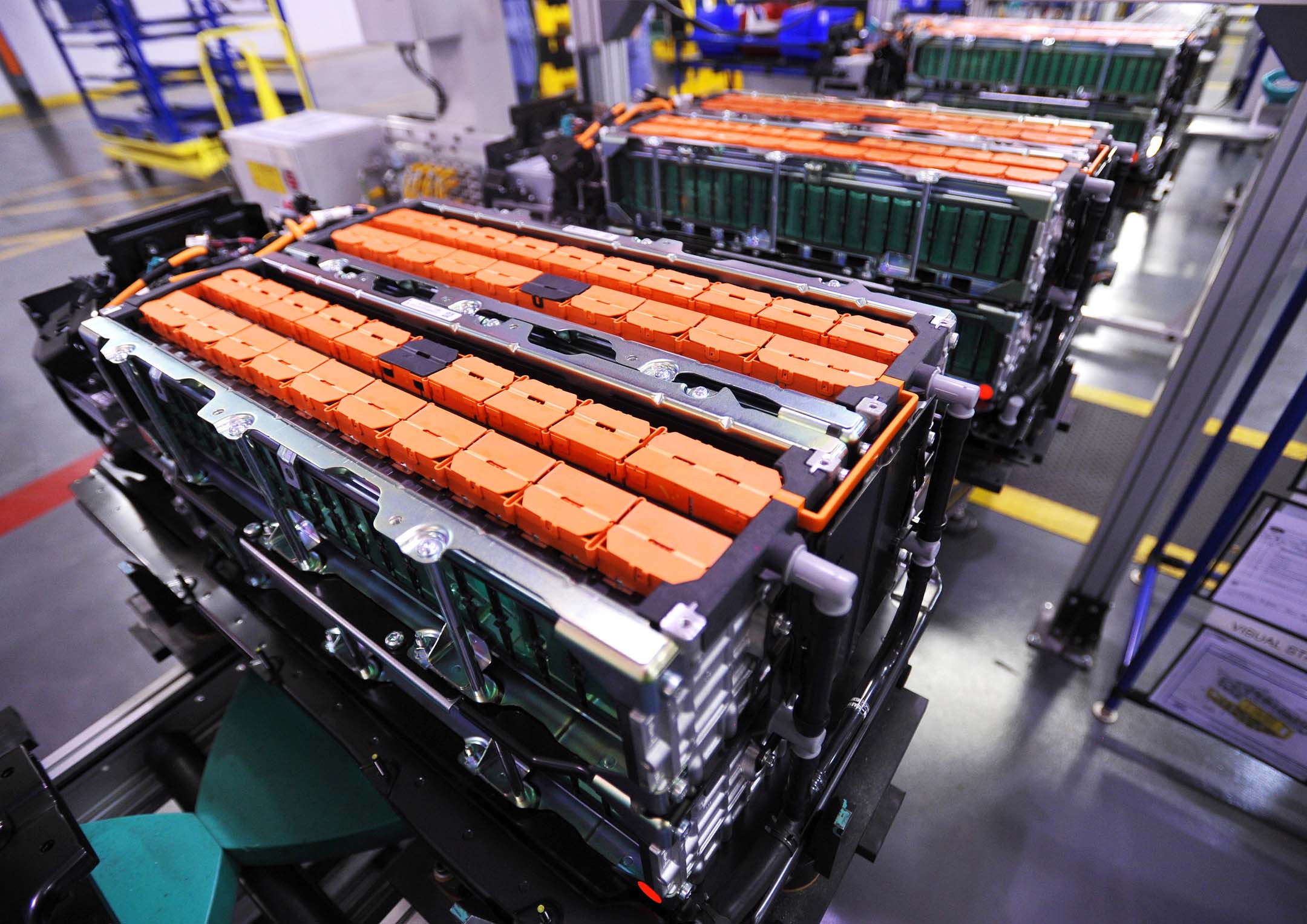 What’s next in hybrid and EV car batteries? According to Buchmann, there’s no promising battery system currently close to market release outside of lithium-ion. Why? Many experimental batteries are being tinkered with in laboratories around the world – but issues with safety, durability, cost, battery life, performance in certain temperatures, and a slew of other challenges stand in the way of their journey to the mainstream.