Carl Abarth was born an Austrian, built his career on a friendship with a famous German family, and emigrated to Italy to found his company. Today, his name can be found written on two ostentatiously large badges, one affixed to a convertible made in Japan, and the other to a little city car made in Mexico.

“Hey, hold my Peroni and watch this.”

Those badges are a worry, particularly the one on the Fiat 124 Spider, which is large enough to be seen from space. Usually, the larger the belt buckle, the smaller the cowboy. Or, since we’re already waist-deep in multiple nationalities, the worry here is what the British would call a case of all mouth and no trousers.

And with Abarth, Fiat’s scorpion-bearing sub-brand, you’re certainly getting a lot of mouthiness. Carl’s company began with some unique work as an Italian associate of Porsche, building a unique F1 car under contract – the money was used to spring Ferdinand Porsche Sr. from French prison after the war. Next, he put together a racing team, and finally found lasting success as a manufacturer of performance exhausts.

Abarth, therefore, is all about being loud. Its history is in little inexpensive Italian buzzboxes that are quick and nimble, but also roar like they were trying to shout down the V12 beasts from Maranello and Sant’Agata. Today, however, the Abarth-tuned 500 and 124 sit on the rather unforgiving tarmac of Willow Springs Raceway in California, America’s oldest paved road course. Loud doesn’t matter here, nor mixed-country lineage, nor the size of your badge. Fast does.

The pursuit of speed begins in the classroom, or at least it does where Skip Barber Racing School is concerned. Even if you’re not much of a gearhead, that name might sound familiar, as it’s one of the more well-respected driver education firms in the US. Unfortunately, the company went through bankruptcy proceedings last year, but it has emerged on the other side with its reputation for methodical teaching strategies intact.

American Abarth purchasers are provided with a day’s instruction as part of the purchase price of their new pet scorpion, and if you’re Canadian, the school’s current programs come recommended by some of the most demanding club racers I know. If you aspire to own any sort of performance vehicle, even a scrappy little Italian with fewer than 200 ponies under the hood, driving instruction is a must.

Our pair of Abarths represent a nice dichotomy, one being a front-wheel-drive city car, and the other essentially a rebadged Mazda. Both get a similar powerplant: a turbocharged 1.4L four-cylinder engine that makes 160 hp in the 500, and 164 hp in the 124 Spider. Torque is 170 lb-ft for the front-wheel-drive 500, and 184 lb-ft for the rear-drive 124.

We’ll begin with the 500 Abarth, not least because its $24,745 price tag is more than ten thousand dollars cheaper than its sleeker, rear-drive cousin. All 500s are turbocharged these days, as Fiat struggles to hold on to market share on a continent that mostly favours pickup trucks and crossovers over premium pocket rockets.

It’s still a good-looking little thing, with the assembled cars here today resembling a batch of meth-infused Skittles cooked up by Walter White. The 500 is as tall and bulbous as a baby’s sneaker, and turning it into a performance machine is mostly about clamping on a set of 16-inch wheels and affixing some racy decals.

There’s also a bit of a rear diffuser treatment to go with the twin exhausts out back, the latter being the true calling card of any Abarth. Did I say calling card? I meant bellowing card.

That the 500 Abarth is this loud makes no sense. It is a mouse with the soundtrack of the MGM Lion opening credits. There’s a bark on startup, a deep-throated baritone gurgle when you get it going, and a rush of turbo whooshing when on the throttle. 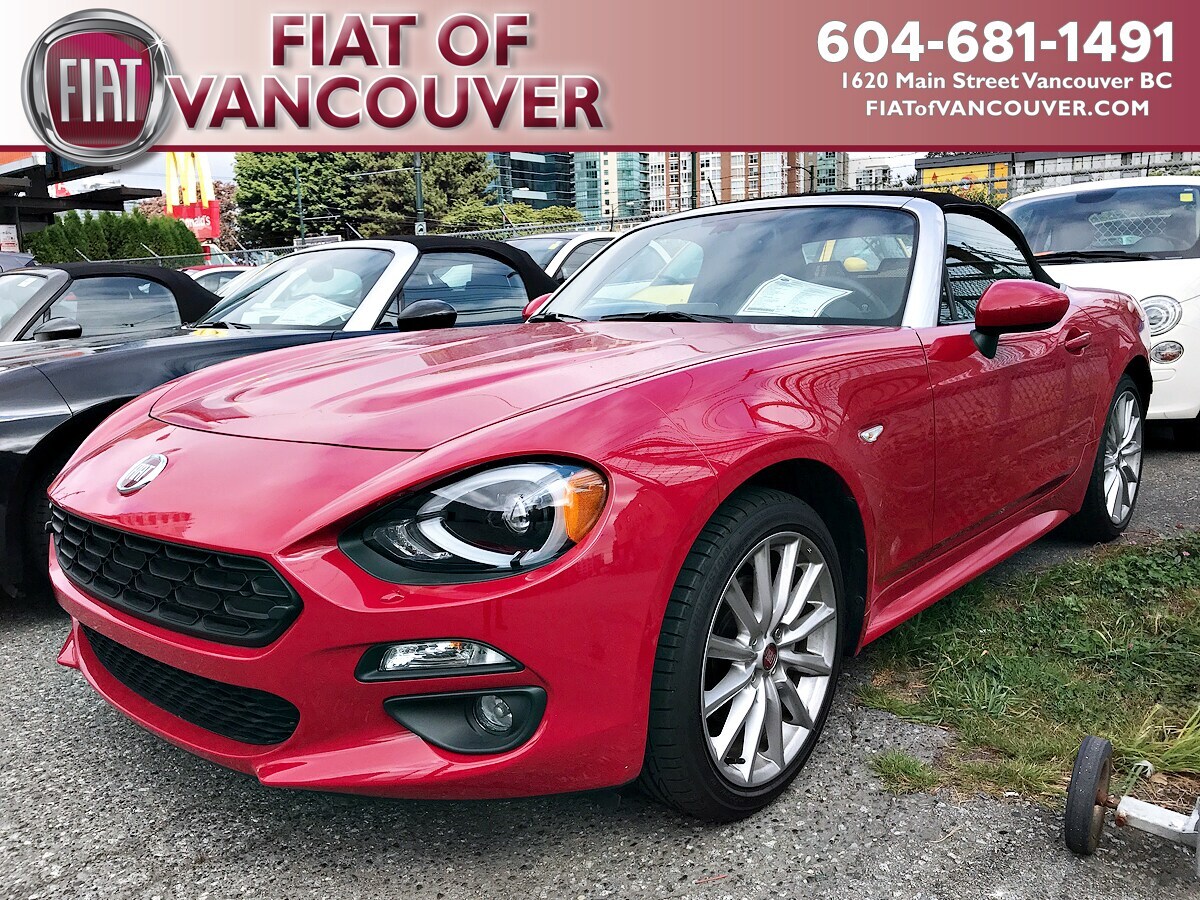 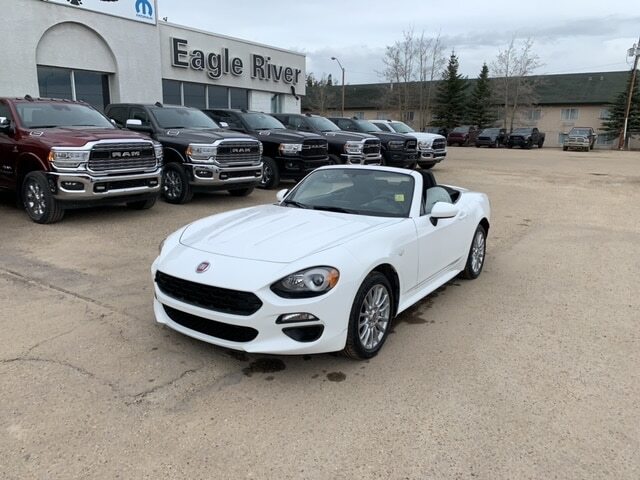 A general idea about the handling characteristics of the 500 Abarth can be best found by Googling the phrase, “motorized bar stool”. The driver sits way up high in a narrow cabin, surrounded by retro-themed shiny painted plastic that’s not entirely convincing, but fits the car’s not-overly-serious aesthetic. There’s the option for a convertible with a two-stage opening roof, and the transmission choices are either a six-speed automatic, or a five-speed manual.

The automatic is fine, and well-paired with the convertible as a hilariously loud urban runabout. It’s “Hey! Whattsa matter for you?” as a car. The coupe with the manual transmission should be the more focussed choice, but the 500 Abarth doesn’t really do focussed. The shift knob feels like a child’s bowling pin stuck upside-down in a flowerpot (I stole this description from somewhere else, but it’s pretty much perfect), and the car’s short wheelbase makes it very nervous under braking.

On the autocross circuit, the 500 Abarth was plenty of fun. On the bigger course, there were a few places where firm braking had the rear slewing around in an alarming manner. However, if you embraced the instability as a feature of the car, the littlest Abarth provided some genuinely cackle-inducing character. In the slower corners, cramming on a ton of braking late and trailing off let you scrub speed while slightly sideways.

I’m not sure hooning into brake-induced oversteer is in the Skip Barber handbook for day one, but it’s certainly written on the front page of Abarth’s to-do list. In block capitals. And crayon.

Moving from the 500 into the 124 Abarth was a step down in ride height, and a step up in seriousness. Sort of. I remain unconvinced by the larger overhangs and generally tacked-on appearance of the Fiat version of the Mazda MX-5’s pared-down look. However, by really dialling up the aggression, the Abarth version somehow looks more evened out. Some cars here were fitted with the more potent Monza exhaust which is an option in the US market only, but weirdly none were quite as loud as the 500 Abarth.

Mazda spent a great deal of effort crafting the performance envelope of their directly related MX-5, with an overall effort to focus on balance. The new 184 hp version for 2019 is even better, thanks to its revvier-feeling engine, yet it retains a sort of pure, carefully engineered personality that feels linked to thoughtful Japanese rituals.

Then along comes Abarth to douse the sushi in spicy tomato sauce. This should not work at all, but it does.

First, it could be spicier for this price. At $35,995, the 124 Abarth is not a cheap way to purchase 164 hp, even if it is backed up by 184 lb-ft of torque. On paper, middling-hot turbocharged compact sedans should snap up this scorpion like desert birds of prey.

However, on the track, the 124 Abarth is an absolute riot in a way few front-drivers can hope to replicate. Mazda is an engineering company, and must justify every design decision with adherence to an overall ethos. Abarth’s contribution seems to be, “Hey, hold my Peroni and watch this.”

The wallop of turbo torque that occasionally overwhelms the 500’s front tires has a limited-slip differential to put down the power, but it’s also significant enough to let you slide out the rear with a bit of provocation. The Abarth’s suspension is slightly stiffer than the standard 124, but it’s still soft enough to let the driver know exactly where they’re balancing the weight.

On one hand, the 124 Spider is not exactly fast. On the Willow Springs’ big circuit, you’d have enough time on the front straight to make yourself a caprese and tomato sandwich.

On the smaller, tighter course, however, the 124 is a gem. It responds extremely well to the sort of driving Skip Barber is trying to hammer into our heads today, braking in a straight line with minimal trailing brake into the turn, maintaining throttle position through the corner, and feeding in power while unwinding on exit. You can be a little less patient with the 124 than the 500 as the former’s limited-slip differential, and momentary pause for the turbo to spool up allows for earlier throttle application; in the 500 Abarth, you just end up taking weight off the tires that are doing their best to steer and accelerate, resulting in a bit of squealing understeer.

Driven smoothly, the 124 Abarth is nippy and fun. Driven less smoothly, it feels less razor-focussed than the MX-5, but is an absolute riot. Where the 500 is whoopsy-daisy unstable, the Fiat 124 goes where you want it, and also has a considerable amount of forgiveness for ham-handed inputs. Behaviour is so well telegraphed via steering and body-roll to the driver that it’s easy enough to catch any mistakes. And, though it’s not the fastest route around the track, the 124’s cheery rambunctiousness actually encourages more pitching and catching of little slides.

On paper, these cars couldn’t be more different. In the sheetmetal, they’re extremely similar. Their mongrelized DNA blended from various countries of manufacture feels like a boon. Both are more furious than fast, but in an entertaining way that’s more rewarding than the last tenth you might get out of something ruthlessly engineered by a team of white-coated Germans.

And, most importantly, both these cars love to be driven in a fashion which can be best described as vigorously Italian. Carl Abarth would not perhaps immediately recognize much about either of these Fiats that bear his name. However, if he happened to drive them, I think he’d say they were both worthy to carry the badge of the scorpion.

About Brendan McAleer
Brendan McAleer is a Vancouver-based automotive writer, a member of AJAC and a ginger.
Follow me
You may also like
AdChoices
Latest Articles
﻿