Intro to Drag Racing with the 2019 Dodge Challenger

Intro to Drag Racing with the 2019 Dodge Challenger

How do you follow an act like the 840 horsepower Dodge Demon drag racing special – a limited run monster that could pull a wheelie and do 9s in the quarter-mile? This was a dilemma facing the lads at Dodge’s SRT division.

Say hello to the Challenger R/T Scat Pack 1320. As Mark Hellman, brand manager for Dodge puts it, “This vehicle is the follow-up for Dodge’s drag racing heritage. We couldn’t just have the Demon and walk away from the dragstrip. And while the Demon was limited and high-end, this is a grassroots racer. It’s kinda for the masses.”

It’s safe to say there probably aren’t “masses” of Canadians who will go for this 485 horsepower $55,190 special, but with a much bigger drag racing culture south of the border, there’ll be plenty looking for a car that can be flogged at the strip and then drive them home in comfort. Of which the 1320 is perfectly capable.

As a drag racing newbie, and just about to do my first run in a Plum Crazy purple 1320 at the legendary Pomona drag strip, comfort is the last thing on my mind. Luckily I have chief SRT engineer Jim Wilder riding shotgun to help me along.

As the Scat Pack 1320 only comes with a specially calibrated ZF-sourced eight-speed auto, at least I don’t have to worry about a clutch and gear changes. Although as I’m about to find out, this process is quite involved, requiring more skill than hole-shotting your “average” all-wheel-drive supercar with launch control. I’m thinking Porsche 911 Turbo S or Nissan GT-R where a decently trained monkey could do the deed – hold both pedals to the floor, release the left one (brake) and let the electronics do all the work.

Not here. First order of business is to heat up the rear Nexen 275/40R20l street-legal drag radials. Heat up? Okay, smoke the livin’ bejesus out of them. The “burnout box” is the first bit of real estate you encounter when lining up for a run – a watered down patch of pavement. With the 1320 in Drag Mode, Wilder sets up Line Lock wherein I keep the front brakes locked by holding down a button on the left spoke of the wheel. Now the fun part. “Give it some throttle, count to five, and then release the button and roll up to the staging area.”

I noticed some of my colleagues had been a little shy about this, generating only a faint wisp of smoke before backing off. Despite going against all my natural instincts of mechanical preservation (not to mention environmental preservation) I manage to send the full fury of the 1320’s naturally aspirated 6.4L Hemi’s 485 horses and 475 torques to vulcanize those poor Nexens, generating a heroic cloud of smoke that nearly envelopes the whole car.

Next order of business is to slowly roll into the staging area where the “Christmas Tree” lights are the rule of law. At the top, two sets of staging lights illuminate when your front tires are lined up with the timing lights. Not that we were being timed – the Dodge fellows didn’t want any friendly competition to turn ugly. They do claim the 1320 will conquer the quarter-mile in 11.7 seconds at 115 mph. Oh, and in case you hadn’t figured this out, the handle 1320 comes from the number of feet in the quarter-mile.

Now that the rear tires are sticky as three-day-old roadkill, it’s time to launch this puppy. The technique involves holding the Challenger with left foot hard on the brake while bringing the V8 up to about 1,800 rpm. Hellman is marvellously patient with this Canadian newbie, explaining the approach to launch long after the green has lit up on the Christmas Tree: “Roll into the throttle while you release the brake. Not too much because you don’t want to spin the tires. When you feel it hook up, pedal to the carpet.”

My first runs goes pretty well, although I could be more aggressive with the throttle. Okay, another burnout (can we just do this?) and this time Hellman show me how to use the nifty TransBrake function that is copped from the Demon. It’s a bit of a convoluted sequence of button and brake-pedal pushing, but once engaged there’s no need for left-foot braking – the brakes are held until you release them with a flick of the left shift paddle. It’s a lot to think about – a bit like rubbing your stomach and patting your head at the same time.

So, eyes on the tree, right foot tickling the throttle to find 1,800 rpm and left fingers hovering on the shift paddle.

This time the launch goes better. The Challenger 1320 squats and fires itself down the strip with more conviction. Helping here is the adaptive suspension’s Drag Mode that also comes from the Demon. “It’s all about getting weight transfer to the rear tires,” says Hellman. “Shocks go firm-firm in the rear and firm-soft in the front so you get that nice separation. It plants the tire really well.”

The three 2019 Dodge Challenger R/T Scat Pack 1320s here at this Pomona event are flogged mercilessly for the entire day. Nothing breaks, and frankly I’m amazed at how the Nexen tires hold up. You’d think after even one of those violent burnouts there’d be nothing left of the them, but no – the Challengers keep lining up, sending out plumes of smoke, and slingshot down the strip to the furious bawl of an angry Hemi.

Considering the 2019 Scat Pack 1320’s stickers about $30,000 less than the 2018 Demon, it might be considered a bit of a drag racing bargain. But here’s the real steal. If the 1320’s standard “driver’s seat only” spec is just a tad too austere, the passenger seat and rear bench can be had for one sweet toonie. 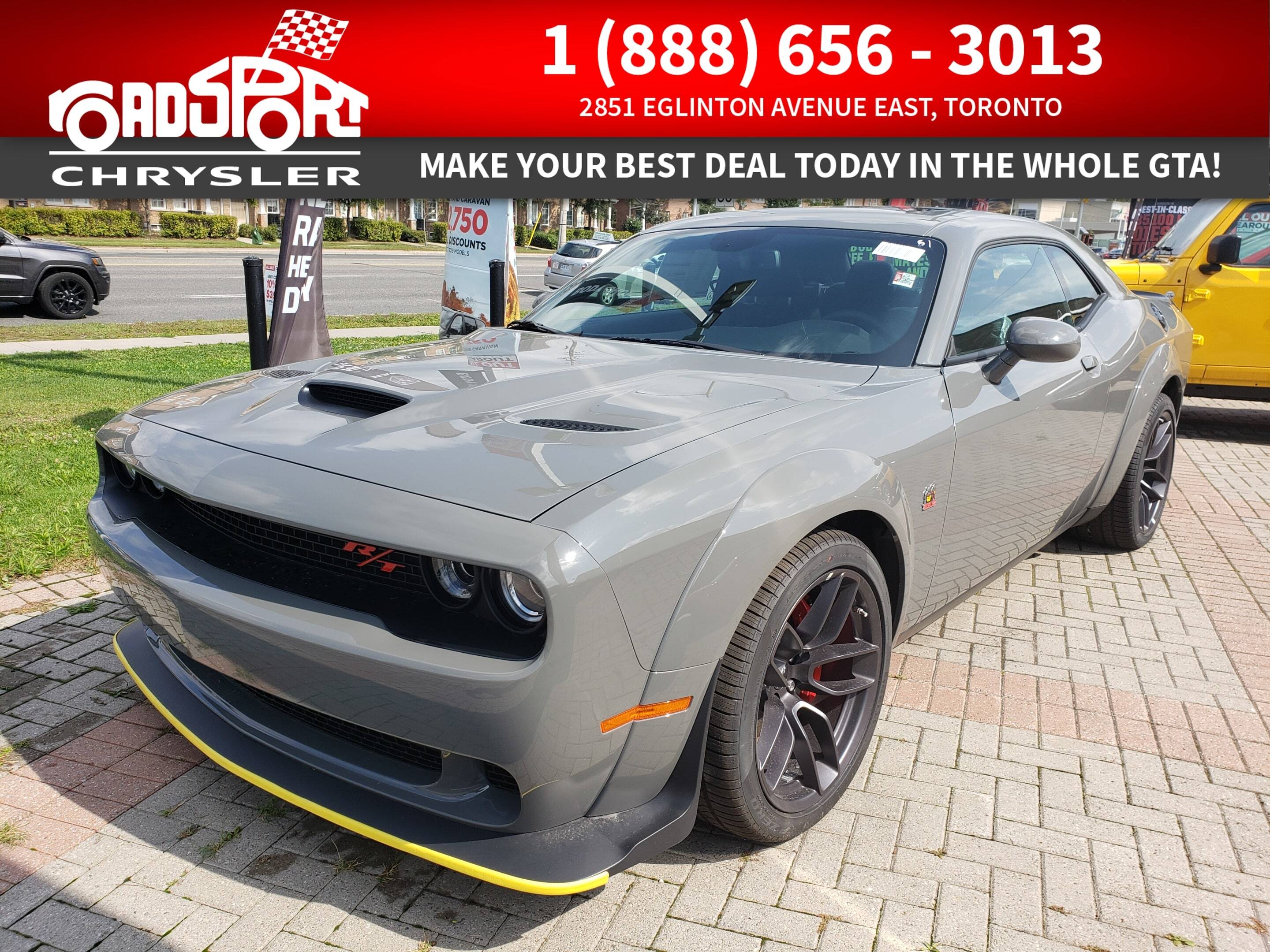